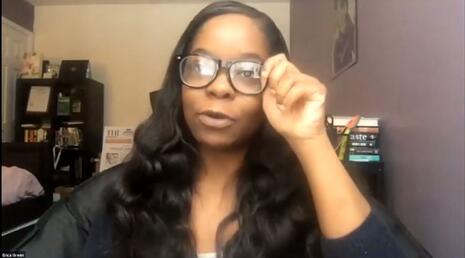 Even by the paper’s liberal standards, education reporter Erica Green’s obsequious perspective was cringeworthy in its lack of journalistic rigor. It began:

CENTREVILLE, Md. — When Andrea Kane sat down to write a letter to parents in her school district days after George Floyd’s death in 2020, images of the Black man pleading for his life under the knee of a white Minnesota police officer were haunting her….

“Racism is alive in our country, our state, in Queen Anne’s County, and our schools,” she wrote in the letter, emailed to the parents of all 7,700 students in the district.

The message engulfed “the small, predominantly white community tucked along the Chesapeake Bay in a yearlong firestorm.”

The debate has sometimes focused on K-12 curriculums after conservative activists began branding a range of topics including history lessons and diversity initiatives as “critical race theory,” an academic framework that views racism as ingrained in law and other modern institutions. The term is now often deployed to attack any discussion of race and racism in American classrooms — pitting educators who feel obligated to teach the realities of racism against predominantly white parents and politicians who believe that schools are forcing white children to feel ashamed of their race and country.

There was a color photo on the front page and another seven black-and-white photos as the story covered all of page A-10 and most of A-11.

Kane certainly talks like an activist, complete with the standard weird lingo about “black bodies.”

She knew the Black Lives Matter movement was divisive — even in the Black community — but it didn’t make the mantra any less true. She felt she would have been negligent in her role had she not addressed the images her students were seeing on television. “How could I not help them make sense of a Black body being destroyed in the street?” she said.

With all of this in mind, she agonized over every word of the letter she wrote on June 5, 2020.

Green painted local parent (and émigré from Communist Yugoslavia) Gordana Schifanelli as the arch-villain in this morality play for starting up a Facebook group named the Kent Island Patriots that was “raging about” Kane’s letter.

But Dr. Kane would not bend.

Over nearly three years on the job, she had collected evidence of systemic and overt racism in the semirural, conservative county, where only 6 percent of the student body is Black. She knew that Black students regularly heard the N-word used in the county’s schools, that they were underserved and overdisciplined.

Green relayed Kane’s incredibly thin anecdotes about the supposed racism she suffered on the job. When Kane had the gall to compare herself to a slave, reporter Green (who is also black) simply rolled with it.

….Sleep eluded her, and she found herself looking over her shoulder at the gas station and the grocery store. Fearing for her safety, she moved out of the county.

She compares it to stepping outside her body, and back centuries to a time when the county’s residents sold enslaved people outside the courthouse.

“Talk about vulnerable — they made me feel subhuman,” she said of the board and the Kent Island Patriots. “They hung me out and stripped me bare.”

Following her metaphorical slavery, Kane became a professor at the University of Pennsylvania Graduate School. Green ended on her triumphant departure, complete with performative masking piety:

….Before walking out of the building, she adjusted the mask on her face, which was emblazoned with the words Black Lives Matter.