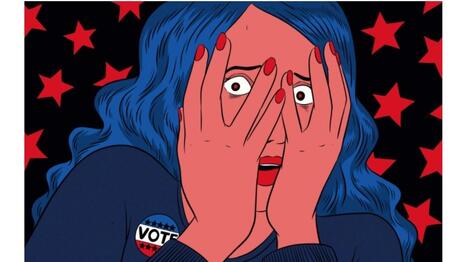 New York Times reporter at large Sarah Lyall has pivoted from mocking the Brexit movement and UK Prime Minister Boris Johnson to commiserating with U.S. Democrats in mortifying fashion, as they fear a replay of their 2016 Election Night nightmare: “For Democrats, Horror Never Ends – Replaying 2016 in an endless loop, with healthy doses of fear, stress and loathing.” [Image from the Times story.]

If Lyall has any clue how bad a look this is for the urban liberals she profiles, she keeps it to herself; her tone is wholly sympathetic. One can’t imagine a Times reporter performing a similar treatment for disappointed Trump voters if Biden wins in November (then again, Republicans tend not to scream and cry and howl when their candidate loses).

This supposedly fact-based newspaper thinks it’s fair to compare the president of the United States to a serial killer in a horror movie. Lyall began:

For many Democrats, election night in 2016 unfolded with the sickening trajectory of a horror movie in which the teenage protagonists break out the beer and party on, unaware that the serial killer they thought they had vanquished is looming outside the window.

The watch parties, the pantsuits, the balloons, the blue-tinted cocktails, the giddiness, the sense of history, the electoral projections showing that Hillary Clinton would surely defeat Donald J. Trump — to Democrats, these now look like quaint snapshots from some credulous prelapsarian world. And now, with the next presidential election approaching and Joseph R. Biden Jr. well ahead of President Trump in the polls, the traumatized, anxious Democratic voters of 2020 are not making the same mistake again.

The fate of the world is on the line!

It’s hard to overstate the degree of anxiety in America right now, as the country confronts a Hydra of troubles: the pandemic, the economy, the fires, the protests, the violent plots against public officials, the assault on voting rights, the state-sponsored disinformation, the sense that democracy itself is on the ballot.
….

“What we’re seeing among Democrats is the sense that ‘we were in this position four years ago, so we’re not getting our hopes up,’” said Patrick Murray, director of the Monmouth University Polling Institute. “

Republicans are consistently more confident that the election is going to go the way they want.”

He worries, he said, “that a significant number of Republicans won’t accept the outcome if Donald Trump loses, because they’ve convinced themselves he’s going to win.” 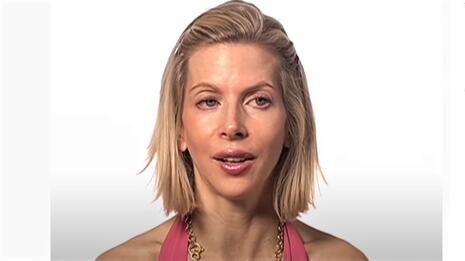 But would Biden supporters accept a Trump victory? That question is never posed by the press. Hillary supporters certainly didn’t accept Trump’s 2016 win.

Lyall doesn’t seem to grasp how pathetic she makes her Democratic subjects appear.

“I am still traumatized by the memory of our Hillary cupcakes,” tweeted Suzanne Nossel, chief executive of PEN America….

In Woodstock, N.Y., Abbe Aronson is still haunted by the wrenching experience of her 2016 election party, which began as a celebration and ended with a group of zombified adults weeping in the living room.

But anything can set her off. Recently, her longtime mail carrier, an older man who brings biscuits for her dog and to whom she gives a Christmas present every year, mentioned that he had started listening to “this really funny guy named Rush Limbaugh” on the radio. “Do you know what a ‘feminazi’ is?” he asked.

They have not spoken since. She is sleeping between two and five hours a night. “I’m talking to you and my neck is throbbing and I’m having a visceral response,” she said. “I have a recurring pain in my left shoulder and my left neck, from being middle-aged and furious.”

Naturally, the Times won’t explain that Limbaugh uses the term “feminazi” for people who are unhappy when an abortion doesn’t take place, for those “who are happy about the large number of abortions we have” in America. At the Times, calling your opponent a “feminazi” is cruel, but comparing the president to a serial killer is completely acceptable.

Earlier this month, Lyall brought in psychiatrists to smear Trump before the first debate with Joe Biden.