U.S. Olympic hammer thrower Gwen Berry says her inflammatory story on The Players Tribune blog should make white folks uncomfortable. In truth, it ought to make her ashamed – for hating her country, for perpetuating the myth of rampant white supremacy in America, for accusing white cops of targeting her son and for more. 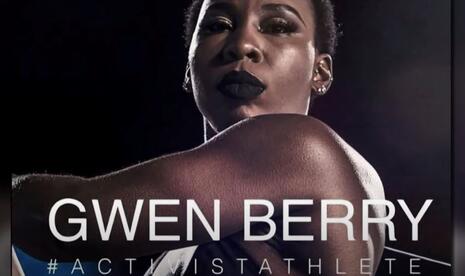 Berry has been exuding hatred for her country ever since the 2019 Pan American Games, where she raised her fist in defiance on the victory stand. During this year’s U.S. Olympic trials, she covered her face with a shirt and turned her back on the American flag during the playing of the national anthem.

In The Players Tribune blog, Berry unloaded heaps of vitriol on the USA.

Winning a gold medal at the Pan American Games was the highlight of Berry’s career, but she admits she was not filled with pride as she represented her country. Of “The Star Spangled Banner,” she wrote:

This song doesn’t speak for me. This anthem doesn’t represent me. It’s hypocritical.

I decided I was going to be true to myself. I wasn’t going to respect something that disrespects people who look like me.

Berry accused the U.S. Olympic & Paralympic Committee of enforcing a rule “that had silenced athletes for years.” She was being punished for speaking up about something that has been swept under the rug for a long time, and she lost financial support left and right. She nearly quit competing in track and field.

After George Floyd was killed, “white America woke up” and people stopped ignoring police brutality, Berry wrote. She began to use her platform to make sure athletes like her would no longer be punished. Her defiant voice would be heard.
That all vanished at this year’s Olympic trials. She finished third and was told the national anthem would not be played while the athletes were on the victory stand. But she felt betrayed because the Star-Spangled Banner began while she was on that stand.:

I can’t lie, I definitely felt targeted. How could I not? Part of the reason they even changed the rule to allow for protests in Tokyo was because of everything that went down with me back in 2019. It felt weird, and it hurt me …

Berry made an excuse, saying that “because of the way the cameras were positioned, it looks like I’m intentionally turning my back on the flag.” She also placed her t-shirt over her head to remind everyone of the anti-Americanism she stands for.

There was an immediate, national uproar. It was like 2019 all over again, she wrote. “Conservative media was running all these stories like, GWEN BERRY TURNS BACK TO U.S. FLAG DURING NATIONAL ANTHEM AT OLYMPIC TRIALS. One story called me the ‘flag-snubbing U.S. Olympian.’” Cong. Dan Crenshaw called for her dismissal from the U.S. Olympic team. Berry’s social media accounts were “flooded” with support from teammates and with “attacks from the ignorant.” She got a lot of negative attacks from trolls after Sen. Ted Cruz criticized her, too.

As a black mom, Berry says there are people will never, ever view her son as someone who deserves to live and thrive in the world. He’s at risk of “being beaten, abused or even murdered by a system of white supremacy.” This is because black lives are targeted. “My country has shown me time and time again that it doesn’t give a damn about my son. And it doesn’t give a damn about me,” Berry railed. “This shit is personal.”

Berry’s troubling personal narrative is one of bitterness and hatred toward her country, one that gave her the opportunity to compete on its national teams. She’s responsible for her actions, but her story also raises an important issue concerning the U.S. Olympic & Paralympic Committee. It cannot inspire national pride among our athletes when it permits open protest in Olympic trials, and it bears part of the blame when athletes bring disgrace to America.