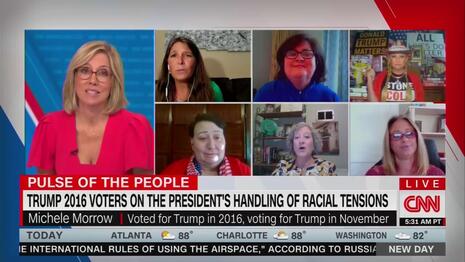 CNN host Alisyn Camerota conducted another 2020 voter panel on Tuesday’s New Day with six women who said they voted for President Trump in 2016; three who will vote for him again and three who say they now support Joe Biden. Instead of moderating the discussion, Camerota cut in to fact-check a Trump voter and defend the Democrat talking points. She did not try to fact-check the Biden supporters.

Camerota also only asked negative questions about Trump, leaving out any questions about Biden (although that may change in part two of the interview airing tomorrow). Here’s the questions that made CNN’s highly edited segment (click “expand”):

…[to Biden voter] Jessica, who do you hold responsible now for the violence we’re seeing in Kenosha?

…[to Trump voter] But this in the past few months, there have been so many cases, so the violence we’re seeing in Minneapolis or in Kenosha or Portland isn’t about of only one case, it’s about the feeling that black men get different treatment than white men. Show of hands, how many of you like the idea of President Trump going to Kenosha?

…How will it help Kenosha and the country for him to go there?

…Do you think President Trump’s Twitter feed is helping the situation?

CNN really likes to take these cheap shots at the president’s retweets of viral videos while ignoring the fact he has explicitly condemned white supremacists and neo-Nazis even during and after his Charlottesville remarks. But that didn’t stop one Biden voter from repeating the left’s lie that Trump called racists, “fine people.” Camerota let the lie go uncorrected, which isn’t surprising since she herself has repeated it as well numerous times before. However she did try to fact-check the Trump voter for claiming Biden wants to defund the police:

BIDEN VOTER: I think it’s gotten worse. I think — and I go back to when — when he said there were fine people on both sides. I just — so basically he was saying that white supremacists were fine people.

TRUMP VOTER #1: If you think Donald Trump is a racist, you’re not paying attention. I’ll just give you one thing to look up. Look up the First Step Act, and look what it’s done for the black community that were incarcerated under Joe Biden’s and Barack Obama’s legislation.

TRUMP VOTER #2: The left wants to defund the police and they want you to take away our guns —

CAMEROTA: That’s not what Joe Biden wants. I mean as you know, Joe Biden has said he doesn’t want to defund the police.

BIDEN VOTER #2:  No, no. I’m tired of the lie that Democrats want to take your guns away. No, they don’t. I know plenty of gun-carrying Democrats. I have a house full of them. They’re not going to come take them away. What they want is a more structured gun ownership plan, besides everybody running around and it being the wild, wild West.

But Biden has explicitly stated he wants to “redirect funds” to the police which is what the left says defund the police means. His running mate Kamala Harris has also not condemned the radical left wing of her party for the defund police movement and like Biden, flip-flops on her support for law enforcement to appease the radical left.

Camerota also cut in to scold a Trump supporter for correcting a Biden supporter bringing up the murder of Ahmaud Arbery as an example of Kenosha violence. The CNN host also didn’t say anything as two of the liberals bullied one Trump supporter, calling her and other conservatives, racists.

This segment was similar to ones CNN’s New Day has done before, in that every time, Camerota teams up with the liberal voters to badger and bully the Trump voters. In July she harassed a black Trump voter for disagreeing the president was racist, and in another panel last year she badgered another black Trump voter to agree Trump’s America was racist.

This CNN segment was sponsored by Consumer Cellular and Amazon. Go to the Conservatives Fight Back page to tell CNN’s advertisers how you feel about this biased segment.