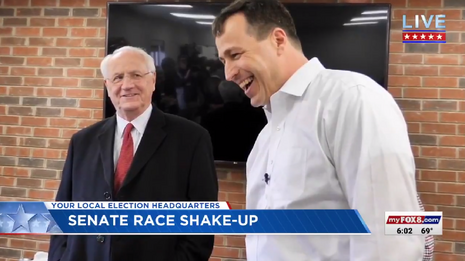 Talk about bad timing. In his absurd eagerness to always be spinning in favor of a Democrat (never a Republican) involved in an election campaign, CNN’s resident prognosticator Chris Cillizza with a history of often hilarious errors spun himself into a corner on Tuesday.

All he had to do was wait a couple of hours and he could have spared himself the embarrassment of portraying the scandal of Democrat candidate for the U.S. Senate from North Carolina, Cal Cunningham, as just a silly sexting scandal when there was already every sign that it was much more than that.

Here is Cillizza performing his spin control in “How the Senate majority may hinge on, yes, a sexting scandal.”

The fight for the Senate majority this fall has huge implications — from which judges wind up on the Supreme Court (and lower courts) to whether the next president can hope to get his agenda through Congress. Those high stakes make the fact that the majority could well come down to a late-breaking sexting scandal in North Carolina all the more amazing.

Here’s what we know: Former state Sen. Cal Cunningham, a Democrat, has admitted to sending romantic texts to a woman who is not his wife.

…The messages are far from tawdry — they read like 1950s letters — but the very fact that they exist does throw a major X factor into the Senate race.

…Those twin developments are too recent to be measured in credible polling just yet. In one good sign for Cunningham, however, there has yet to be any sort of hue and cry from his fellow Democrats for him to leave the race amid this scandal.

Cillizza was so eager to perform his Cunningham spin control that he conveniently overlooked the fact that there could be more shoes dropping on this as evidenced by the fact that the day before the Cillizza spin there was already a report that a Los Angeles lawyer had posted on Facebook that Cunningham had been having an affair with a friend of hers.

And just a very short time after Cillizza published his overeager spin, a huge shoe dropped in the form of the discovery that Cunningham’s involvement with the married woman with whom he was sending “far from tawdry” sexting also included the physical.

Previously undisclosed text messages obtained by The Associated Press and additional interviews show that the relationship extended beyond suggestive texts, as was previously reported, to an intimate encounter as recent as July.

But wait…there’s more! The veteran husband of the woman with whom it is alleged that Cunningham had an affair performed a brutal takedown of the Democrat candidate in this stunning story in Wednesday’s Raleigh News & Observer, “After woman confirms affair, her husband calls on Cunningham to drop out of NC Senate race.”

The husband of the woman who confirmed an extramarital affair with Democratic U.S. Senate candidate Cal Cunningham said he should drop out of the North Carolina race.

Jeremy Todd is an Army veteran who served 19-plus years and severely injured his spine during a paratrooper proficiency jump several years ago. His wife, Arlene Guzman Todd, has confirmed she had an intimate relationship with Cunningham after the candidate’s campaign confirmed the authenticity of suggestive text messages between the two.

“Mr. Cunningham chose to repeatedly engage in activities that would hurt his family and a fellow junior officer and veteran,” Jeremy Todd said in a statement Wednesday to The News & Observer.

“If elected, I can only imagine how misplaced his judgment would be for the people he’s charged to represent,” Todd said. “I firmly believe Mr. Cunningham should drop out of the Senate race and ask that his behavior and actions be reviewed under the Uniform Code of Military Justice.”

Ouch! That was painful. And not just for Cunningham, but also for Chris Cillizza.