Left-wing journalists warned that the Republican convention would be a torrent of lies, but some of them are having truth problems on television. On Monday night, PBS anchor Judy Woodruff only tolerated 84 seconds of Trump-endorsing black Georgia state Rep. Vernon Jones (a Democrat) before she broke in. “We’re seeing an aggressive attempt on the part of this party and of President Trump to say, I’m not a racist.” They couldn’t let that sit there without attempting rebuttal.

Woodruff turned to PBS White House reporter Yamiche Alcindor, who uncorked three lies or errors in about a minute (your tax dollars at work!):

ALCINDOR: The Republican party as a whole in 2012 did really long autopsy trying to figure out how to expand their base and diversify. Then came Donald Trump. He did the exact opposite of what the party said he focused on racial division, focused on immigration, called immigrants rapists and criminals.

This is a common mangling of Trump’s 2015 announcement, and a soundbite that played on what seemed like an endless loop at the time…which  should make it easier to characterize correctly.

You could describe this accurately, and have it still sound negative, but they always have to transform it into sounding extremely racist. But then Alcindor made a more embarrassing error on today’s news:

ALCINDOR: Then of course while he’s in office President Trump has really beat up on the Black Lives Matter movement. He’s called people anarchists, he’s called them not good for America. He’s really called into question whether or not people should be taking to the streets after we see deaths like Jacob Blake in Wisconsin or George Floyd in Minnesota.

Blake, who was shot six times by police in Kenosha, Wisconsin, is not dead. He’s in stable condition in the hospital. Ooooops.

Then Alcindor trafficked in Joe Biden’s favorite lie, that Trump said in 2017 the neo-Nazis demonstrating in Charlottesville were fine people:

ALCINDOR: But critics of President Trump say that no matter what people around him say, the president himself has really been the person giving his critics their ammunition. We can think back to his response after Charlottesville, when he said there are are very fine people that go to Nazi rallies, and even now, as we’re in the midst of this racial reckoning, he’s talking about the idea that he doesn’t think that police reform or systemic racism is as widespread as Democrats think it — be out to seem.

Even PolitiFact explained that reporters pressed Trump into explicitly declaring “I’m not talking about the neo-Nazis and the white nationalists — because they should be condemned totally.” He was talking about people who opposed taking down all the Confederate monuments who aren’t carrying around Nazi flags.

Let’s hope PBS can do better than this on the next three nights.

PS: This was the graphic PBS used in the brief time they allowed Vernon Jones to speak on the taxpayer-funded network. Note they reported the Georgia Democratic Party called him an “embarrassment.” Anyone remember John Kasich getting that treatment? 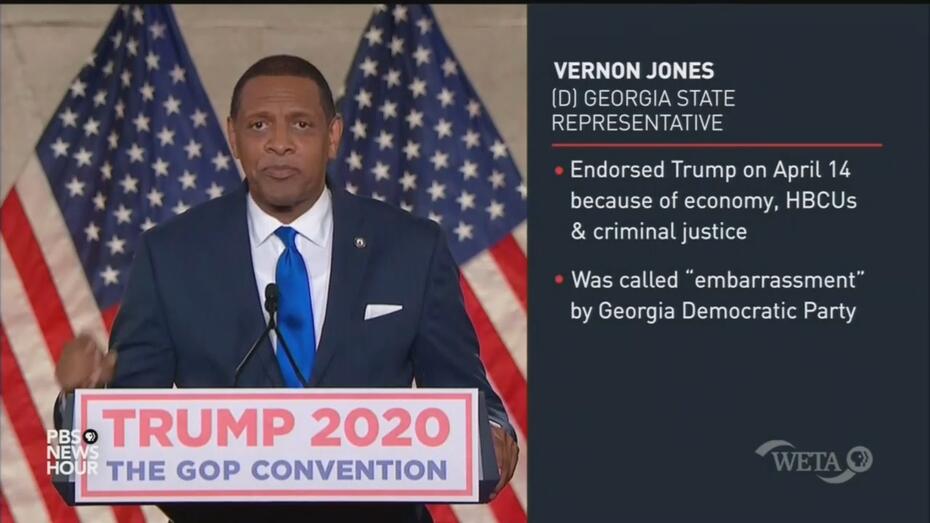