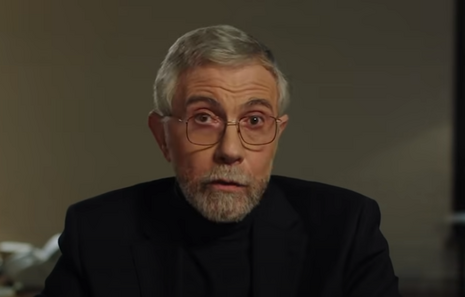 Krugman screeched in a new op-ed that the leftists in the Democratic Party are proposing what he called “sensible, popular policies” like “negotiating drug prices” and “cracking down on wealthy tax cheats.” That’s Krugman’s way of promoting his leftist fixation on drug price controls and class warfare by attacking the rich, even though he himself is a millionaire. But he attacked what he called the Democrat’s “Rip Van Winkle” caucus for not going along to get along and risking “blowing up its own president’s prospects rather than give an inch.” Instead of taking ownership for his failing predictions that Biden’s policies would usher in an economic “Biden boom,” the inept Krugman instead blamed “Democrats who checked out intellectually a couple of decades ago and haven’t caught up with America as it now is.”

Part of Krugman’s accusations included lambasting moderate Democrats for appealing to the “racial resentment”-plagued white working-class during the past two decades, effectively stereotyping 40 percent of the U.S. adult population.

[T]he voting behavior of white working-class voters seems more driven by racial resentment than ever. And such voters can’t be won over by trimming back social spending; they want their racial hostility served raw. Trumpists can give them that; Democrats can’t without effectively becoming Trumpists themselves.

Krugman based his stereotypical attack on one of two schools of thought propagated by the University of Virginia (UVA) about the political realignment of the white working-class. The article’s author appeared to prefer the school of thought that blamed “racial resentment.” Krugman conveniently ignored the other school of thought that suggested the realignment was happening because Democrats were not prioritizing “traditional bread-and-butter economic issues.” Krugman seems to have forgotten that the Republican Party in the “Trumpists”-era has become much more diverse. In fact, Truman National Security Project political partner Jeffrey Le and Bustle Digital Group Head of Research Jessica Tarlov released an op-ed in January headlined, “As Republicans get more diverse, overlooked white voters are key to future Democratic wins.” In fact, under the new elected House of Representatives, “Republicans account for a larger share of newly elected minority representatives than in the past.”

But the Trumpist GOPers seem to only provide a haven for “racial hostility” in Krugman’s view. It’s clear that Krugman is desperate to save whatever credibility he has left, as persistently high inflation slams against his misleading arguments that such fluctuations would only be “transitory.” His “plea” to “moderate” Democrats now is that they “please wake up. We’re not in 1999 anymore, and your political fortunes depend on helping Joe Biden govern effectively.”

Conservatives are under attack. Contact The New York Times at 800-698-4637 and demand it distance itself from Krugman’s attack on working-class American voters.