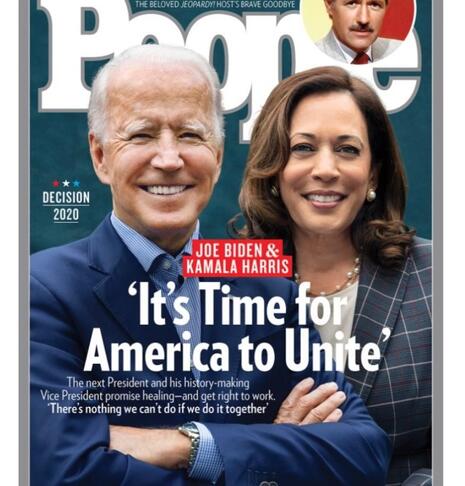 The November 23 issue of that DNC pamphlet known as People magazine came out with a triumphant eight-page Biden-Harris cover story, proclaiming:

“It’s Time for America to Unite.”

The next President and his history-making Vice President promise healing — and get right to work. ‘There’s nothing we can’t do if we do it together’

Inside, the headline was:

It’s Time to Come Together: A divided nation in the grips of a pandemic turned out in historic numbers to elect Joe Biden and Kamala Harris. ‘Let’s give each other a chance,’ Biden told the millions who sought a second term for President Trump. ‘We are not enemies, we are Americans.’

Next to the article’s first words was a quote from Harris: America “chose hope, unity, decency, science — and yes, truth.” That doesn’t sound like “unity” talk, does it?

His decades-long quest for the White House was, at last, fulfilled. But as Joe Biden prepared to address the nation on Nov. 7, he thought less of victory than of loss — the common purpose lost in this bitterly divided America, and the losses of his own darkest times.

The lyrics to “On Eagle’s Wings,” a favorite hymn sung at the 2015 funeral of his son Beau — who died of brain cancer at age 46 — had kept coming back to the former Vice President over the five days he spent at his Delaware home watching voting returns trickle in as his grandchildren buzzed around him. “After Beau passed, it was difficult for him to listen to [that hymn],” says close friend Ted Kaufman.

Now as Biden added its words to his first words as president-elect — “He will raise you up…make you to shine like the sun” — he aimed to lead Americans on the first step to healing writ large. “Joe standing on that stage, reciting that hymn, proves that you can come back from even the worst,” says Kaufman. “When it comes to healing for the country, he knows it’s possible.”

They repeat the story with a picture of Joe and Beau and a long caption on the story’s final page, where Beau says “you’ve got to promise me, Dad, that no matter what happens, you’re going to be all right.” And Westfall goes back to the violins:

Through it all, Biden leans on what he’s learned about healing — not just from Beau’s death, but form the December day in 1972 when his wife Neilia and baby daughter Naomi were killed in a car crash that landed his young boys Beau and Hunter in the hospital.

“Having lived through almost inconceivable loss and failure [in his earlier presidential campaigns], Joe Biden knows humility and resilience,” says historian Doris Kearns Goodwin, who sees in the President-elect now a bit of Teddy Roosevelt’s gift for helping people from all corners “feel common American citizenship” and FDR’s ability during World War II to rally Americans to “accept brutal reality.”

It’s natural to think of lost loved ones at big turning points in your life. But with the Bidens, this has happened so often in 2020 (as it did at the convention) that it sounds like strategic messaging.