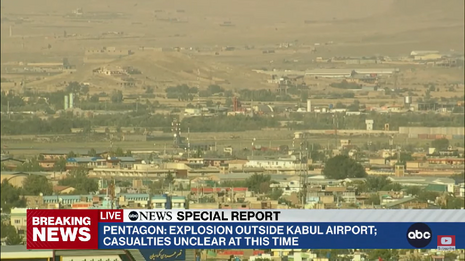 If you heard that a news organization had performed an instant political microanalysis of the effect that the Thursday bombings near Kabul airport would have on the midterm elections over a year away, you could be forgiven if you thought the report was from the Babylon Bee. However, in this case the report was all too real and it originated in Politico barely an hour after a news alert announced the bombings.

In that brief time, Politico writers Olivia Beavers and Andrew Desiderio revealed an absurdly constricted field of vision by focusing on the effect of the explosions on the midterm elections while castigating Republicans in “GOP faces hurdles in push to make Afghanistan matter in the midterms.” The Kabul bombings were incorporated into the subtitle, “Thursday’s bombings in Kabul come as Republicans push to turn the crisis into an albatross for the president. Yet several factors threaten to undermine that effort.”

With the GOP already in a strong position to retake the House next year, the president’s first major foreign-policy crisis could give the party an additional boost as it tries to chip away at his popularity. But several factors threaten to undermine Republican efforts to make Biden’s blunder stick — the most powerful being the nearly 15 months between now and the next election.

Absent an all-consuming global conflagration, voters tend to cast their ballots based on domestic rather than foreign priorities, most notably economic issues. While the longevity of the Afghanistan turmoil remains to be seen, particularly given the ongoing coronavirus pandemic, Republicans believe that the bipartisan criticism of the president’s withdrawal planning will turn the current chaos there into a legacy-defining failure for Biden.

Thursday morning’s suicide bombings in Kabul, in which U.S. troops were injured, underscored the GOP projection.

Where else but in Politico would a couple of fatal bombings cause people to ghoulishly  jump 15 months into the future to speculate about its effect on the midterm elections?

Most of the rest of the article portrays the nasty Republicans as using the Afghanistan debacle to their political advantage for the next year’s midterm elections.

The GOP is bolstered by the acknowledgment from top Democrats that the Biden administration failed to sufficiently plan for a worst-case scenario for the U.S. withdrawal from Afghanistan.

…But while Democrats and Republicans alike urge Biden to reconsider his stated opposition to extending the evacuation mission past the Aug. 31 deadline, the GOP is aiming to undercut the reputation of a president who campaigned as a steady hand based on his decades of experience in foreign policy.

…Republicans contend that Biden is responsible for a logistical and humanitarian debacle that could result in U.S. citizens and vulnerable Afghans being abandoned — a message they say could weigh on voters next year, even with the uncertainty surrounding his economic agenda and the trajectory of the pandemic.

Exit question: Did any periodicals in December 1941, just hours after the attack on Pearl Harbor, speculate about its effect on the midterm elections the following year?