A Portland officer hit a demonstrator with his motorcycle on Saturday, a police press release said.

The policeman attempted to leave a traffic stop after a group of demonstrators surrounded him, according to a press release. When the demonstrators attempted to block the officer’s vehicle, he accelerated and knocked one person to the ground.

As I lock my car after parking at Laurelhurst Park, PPB LRAD announces that no permits were issued to march on streets and orders everyone to march on sidewalks if they march. Also, that the Penumbra Kelly building and it’s grounds and landscaping are closed to the public. pic.twitter.com/vEbk5Kb8ee

Law enforcement ultimately arrested the woman, who has yet to be named, for allegedly jumping in front of the officer’s bike, the release said. She was being treated in a medical facility and was not booked at the time of the announcement.

Video Added by CDN editorial staff for context: (go to the second video, the first is just odd):

A motorcycle cop pulls over two vehicles that were blocking the street to protect the crowd. Protesters swarm him and both vehicles drive off. Two protesters block the motorcycle as it drives off, knocking them both to the ground. pic.twitter.com/eDM83XjZ4G

The Portland Police Bureau said rioters slashed the tires of the police vehicles present at the hospital that night. 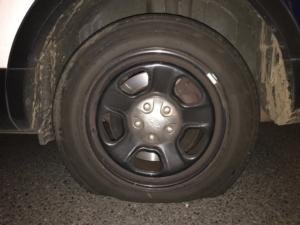 A total of around 100 demonstrators — some of whom donned body armor, helmets, gas masks and shields — chanted about burning down the Penumbra Kelly building, a police facility, in a separate incident throughout the weekend night, according to the release.

Police made multiple arrests from both incidents with charges including attempted assault on a peace officer, interfering with a police officer, disorderly conduct and harassment, according to the release.