Protest Away! US Olympic Athletes Given Free Reign To Shame Country 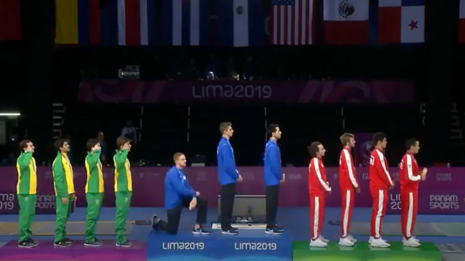 The U.S. Olympic governing body is caving in to social justice pressure and aiming to allow all kinds of protests at the this year’s Olympic Trials. Kneeling during the national anthem? Social justice slogans? It will be open season for all that and more.

Today’s news represents a significant departure from the past. Radical protests have historically been met with harsh discipline by the U.S. and International Olympic committees. Fencer Race Imboden (seen in above photo) knelt on the victory podium at the most recent Pan American Games and was disciplined for violating U.S prohibitions on protest.

Henry Bushnell wrote on Yahoo Sports blog that any demonstration aimed at the following will be allowed: “(1) advancing racial and social justice; or (2) promoting the human dignity of individuals or groups that have historically been underrepresented, minoritized, or marginalized in their respective societal context.”

The U.S. Olympic and Paralympic Committee (USOPC) had previously punished athletes who shamed America at past international competitions. However, Team USA will now demonstrate to the world its excellence in basketball, track and field, a host of other sports … and potentially disgraceful behavior. USOPC cleared the way for athletes to politicize sports, in a nine-page document.

Here’s an overview of what will be allowed by the committee:

The committee will not allow certain “impermissible” actions that “advocates specifically against other people” or “physically impedes” competition or a medal ceremony. It lists “Impermissible Elements”, including “slurs, discriminatory remarks or gestures that denigrate, ridicule or mock a person or persons based upon their race, ethnicity, gender, gender identity, sexual orientation, disability, economic status, nationality, or country of origin.”

To ensure it’s keeping up with the virtue signaling times, the USOPC recently created the Team USA Council on Racial and Social Justice. In December, the council pressured the USOPC to urge the International Olympic Committee (IOC) to end its prohibition on protests at the Olympic Games. The IOC can still elect to punish athletes who engage in protests.

Most U.S. Olympic Trials will take place over the next three months, with several stipulations in place. The U.S. committee will not allow hate speech or hate symbols, expressions of hate or discrimination against minorities, LGBTQ+ individuals or people with disabilities. It won’t tolerate white supremacist hand gestures, the blocking of running lanes, violent behavior or displaying the Confederate flag. As if any of these actions were ever serious issues at previous Olympic Trials. (“Insurrections” are not on the list of forbidden activities yet.)

The Tokyo Olympics begin July 23, and Bushnell reports that America’s newfound acceptance of boorish behavior may not get past the IOC. He says the IOC is under growing pressure from athletes and SJWs, and it’s undergoing a formal review of the rule against protests. Unnamed sources are skeptical the review will lead to any significant changes. So hopefully, American SJWs will not get the opportunity to embarrass their country on the international stage.