One of America’s most well-known conservative think tanks, The Heritage Foundation, rejected hundreds of thousands of dollars from Big Tech corporations. The organization specifically took issue with Big Tech’s censorship of conservatives.

“We cannot in good conscience accept money from a company that repeatedly and blatantly targets conservative speech on your platform,” recently resigned Heritage President Kay Coles James wrote in a late October letter to Facebook CEO Mark Zuckerberg. She went on to explain that “Heritage is in the midst of reviewing” proposals to regulate Big Tech in order to stop censorship, and “the last thing we need is for anyone to think that our conclusions have in any way been influenced.” She had a similar message for Google: “We cannot in good conscience take money from a company that repeatedly, and blatantly, suppresses conservative speech on your platforms.” 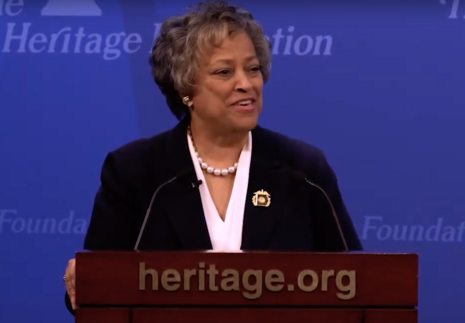 In her letter, James addressed that content from The Heritage Foundation has been suppressed by censorship and “fact-checkers that Facebook now uses as gatekeepers.” In response, James threw down the gauntlet and challenged Big Tech to change its ways. She observed that Facebook has “squandered” its unique capacity for “the free exchange of ideas.” She warned “Until that changes, The Heritage Foundation will no longer be able to accept donations from Facebook.”

In her scathing condemnation of Google, James explained that traditional means of negotiation had failed spectacularly.

She addressed how her organization has repeatedly tried to engage in good faith with Google leadership to address the censorship of conservative ideas: “Unfortunately, Google has proved time and time again that our efforts are pointless,” she lamented. “We sometimes get apologies, but nothing changes.”

James acknowledged: “I will note that your YouTube subsidiary has twice censored videos produced by The Heritage Foundation and our news site, The Daily Signal.” The statement was likely a reference to a famous incident in 2019 where The Daily Signal’s content had been censored by YouTube for questioning transgender ideology.

The Heritage Foundation released another video in late 2019 that called YouTube to the carpet for its censorship. Axios described it as “the first public acknowledgment of a months-long, behind-the-scenes dispute” between the conservative think tank and YouTube. Pediatrician Dr. Michelle Cretella reportedly said in The Daily Signal YouTube video that “if you want to cut off a leg or an arm you’re mentally ill, but if you want to cut off healthy breasts or a penis, you’re transgender,” Axios noted. And “[w]hile The Heritage Foundation concede[d] that those comments are controversial, it argue[d] that the topic of body alteration is worth having a civil debate around.”

YouTube also removed a video from The Heritage Foundation’s YouTube channel in 2020, citing its “hate speech policy,” according to The Federalist. Federalist contributor Walt Heyer, who expressed regret for his own transgender years during a panel at the “Summit on Protecting Children from Sexualization,” doubled down after being censored. Heyer explained in a video responding to the censorship: “I said that children suffering from gender dysphoria should not be encouraged to try experimental hormones in surgery, and I stand by that statement.”

The Heritage Foundation’s rejection of Big Tech on both of the above counts was no small sacrifice.

“According to a Heritage spokesperson, Google had previously donated a total of $1.55 million to the group. Facebook had contributed $275,000,” Axios recounted.

Conservatives are under attack. Contact Google at 1-650-253-0000 and Facebook headquarters at 1-650-308-7300 to demand that Big Tech be held to account to mirror the First Amendment while providing transparency, clarity on “hate speech” and equal footing for conservatives. If you have been censored, contact us at the Media Research Center contact form, and help us hold Big Tech accountable.