On the 20th anniversary of September 11th, 2001, it’s perhaps a good reminder that ABC hired, parted company with, and then rehired Rosie O’Donnell as a co-host of The View. The radical O’Donnell spewed 9/11 conspiracy theories and also trashed “radical Christianity” as more dangerous than radical Islam. ABC liked what they saw so much that they hired her twice, the first stint from 2006 to 2007 and then again 2014 to 2015.

The network knew what they were getting, too. I asked O’Donnell in 2014 on Twitter if she still subscribed to the false 9/11 truther conspiracy that it wasn’t Muslim terrorists, but instead possibly an inside job involving the George W. Bush government. She replied: 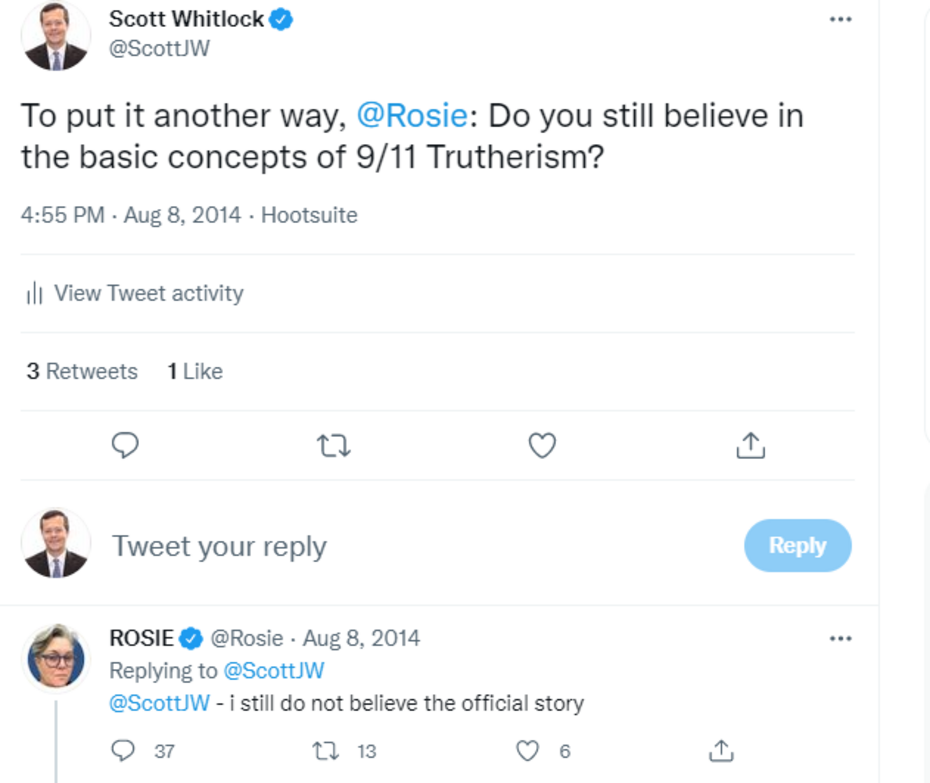 A few weeks later, she pulled Rudy Giuliani into the delusional conspiracy theory:

JOY BEHAR: Well, the one thing is that Giuliani post-9/11 appeared to be very heroic. But now they’re saying that he was not that efficient in helping the people who were the recovery, the responders.
ROSIE O’DONNELL: Also, he was, you know, instrumental in making sure that all of the steel was removed and shipped to Canada right away, Giuliani, was shipped to China, sorry, right away.”
BEHAR: For what purpose?
O’DONNELL: Well, to get it out of there and to have, you know, all of the stu — but it was all gone. So there was no like metal to test. There was no, there was no-
ELISABETH HASSELBECK: Giuliani was involved in the cover-up is that what’s going on? I just want to check.
— Discussion of 9/11 the May 14, 2007 edition of ABC’s The View.

ROSIE O’DONNELL:  As a result of the [9/11] attack and the killing of nearly 3,000 innocent people, we invaded two countries and killed innocent people in their countries.
ELISABETH HASSELBECK:  But do you understand that, that the belief funding those attacks, okay, that is widespread. And if you take radical Islam and if you want to talk about what’s going on there, you have to-
O’DONNELL: Wait just one second. Radical Christianity is just as threatening as radical Islam [loud applause] in a country like America where we have a separation of church and state. We’re a democracy.
— Exchange on ABC’s The View, September 12, 2006.

So next time you hear ABC News, or other media outlets complain about conspiracy theories on the right, remember that ABC had no problem employing (twice!) A nut like Rosie O’Donnell. (For more on O’Donnell’s radicalism, go here.)

For more examples from our FLASHBACK series, which we call the NewsBusters Time Machine, go here.