Reuters made substantial changes without initial explanation to a story linking a Catholic group associated with Amy Coney Barrett to “The Handmaid’s Tale.”

Reuters original report said that “some have likened People of Praise, a self-described charismatic Christian community, to the totalitarian, male-dominated society of Margaret Atwood’s dystopian novel ‘The Handmaid’s Tale” and noted that “others call it an ultraconservative group.”

Reuters, a wire service that feeds stories to much of American media, updated the story Monday evening. The updated story did not include a correction. 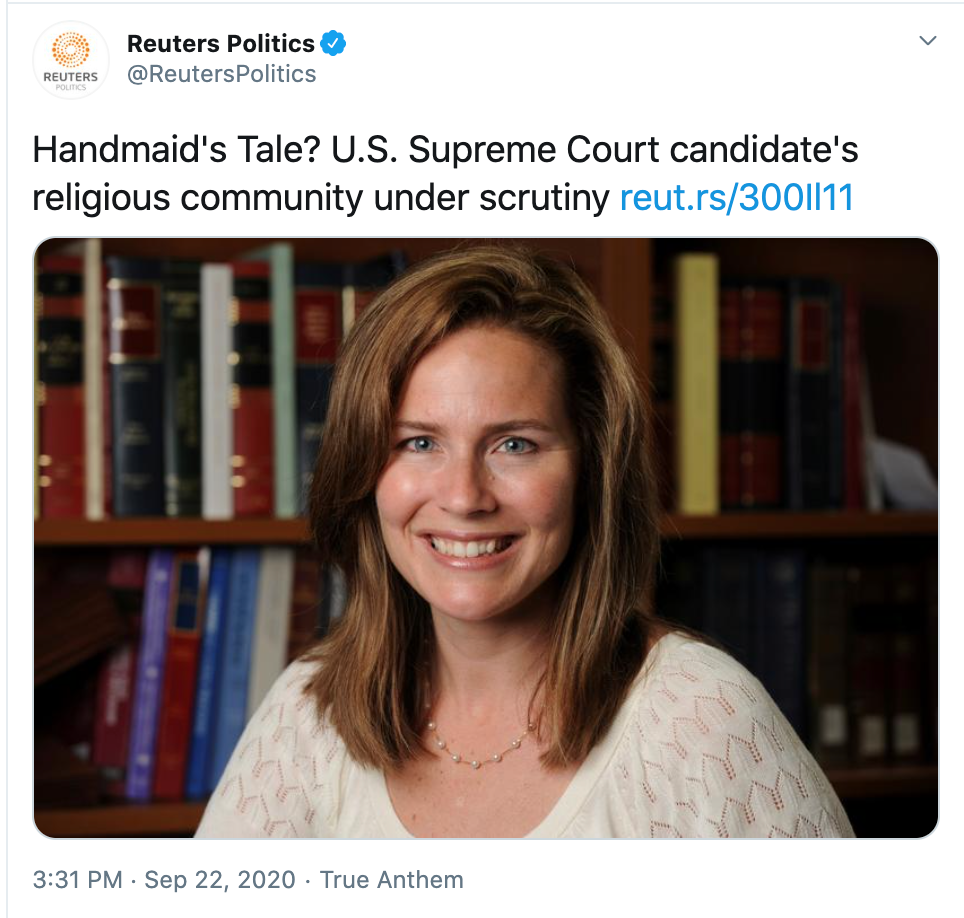 The Daily Caller News Foundation reached out to Reuters Monday evening asking why Reuters had updated the story without explanation.

In a Tuesday morning statement, a Reuters spokesman told the DCNF that “we updated our story to reflect additional information” after receiving comment from People of Praise.

Reuters also added a correction to the story Tuesday morning saying that Reuters corrected paragraph two “to show group’s website says it has liberal and conservative members, does not describe itself as ultraconservative.”

“The group says on its website it is made up of liberals and conservatives, with a mixture including Roman Catholic and Pentecostal traditions, though at least one expert and a former member consider it very conservative,” the updated graph two reads. “Until 2018, it used the term ‘handmaid’ for its female leaders.”

“People of Praise, a self-described charismatic Christian community, has faced renewed interest since U.S. President Donald Trump put one of its purported members, Judge Amy Coney Barrett of the 7th U.S. Circuit Court of Appeals, on his short list of candidates for elevation to the Supreme Court,” the story’s new lede reads.

The updated Reuters story includes that People of Praise communications director Sean Connolly told the publication that “women are not considered subservient in People of Praise and that many hold leadership roles, such as directing schools and ministries.”

People of Praise has not confirmed or denied Barrett’s membership, according to Reuters, ever since a 2017 New York Times article reported she was a member of the group.

“In suggesting a link between People of Praise and Margaret Atwood’s ‘The Handmaid’s Tale,’ the burden of proof clearly lies with the news outlet making such a claim,” Connolly told the DCNF Tuesday evening.

“Bottom line: There has never been any evidence whatsoever to suggest that the Indiana-based People of Praise played a role in inspiring Margaret Atwood’s book,” he added. He did not address whether Barrett is a member of the group, and declined to comment further on the story Tuesday morning.