Scarborough: Cheney Might Have Assassinated Republicans Voting to Remove Her Joe Scarborough has made himself the ass in assassination.

On today’s Morning Joe, Scarborough was discussing the decisive 145-61 vote of the House Republican caucus to keep Liz Cheney in her leadership position, despite her vote to impeach President Trump and her very strong criticism of him regarding the events of January 6th.

The squalid Scarborough thought it was funny to joke that Republicans only voted that way because Cheney might have had them killed if they voted against her. Said Scarborough:

In these charged times, how utterly irresponsible of Scarborough to joke about assassination. In his haste to bash Republicans, Scarborough couldn’t even keep his facts straight, somehow giving Dick Cheney the credit for killing OBL. Expect to be hearing from Barack Obama, Joe, under whose administration the killing of Osama Bin Laden was carried out — against the objection of then-Vice President Joe Biden. 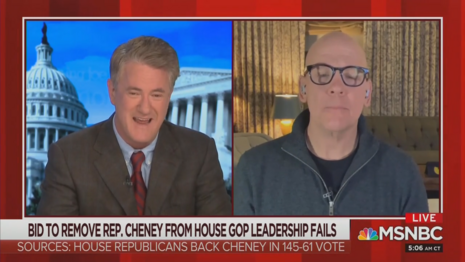 And what a huge hypocrite Scarborough is. He spent much of the remaining segment railing against Republicans as the “lynching caucus” for their failure to remove Marjorie Taylor Greene from her committee assignments. But suggesting that a Republican who voted for impeachment, something Scarborough favored, might have her opponents killed: that was Scarborough’s idea of a joke. It’s like he’s disappointed Cheney won the vote, because that would have been great grist.

Joe: you are the joke. Joe: you are beneath contempt. Message to Joe’s wife and co-host Mika Brzezinski, who in the past put Scarborough on a mandatory mental-health break from the show. It’s time to intervene again.

Joe Scarborough joking that Liz Cheney might have had Republicans voting to remove her from House GOP leadership assassinated was sponsored in part by Liberty Mutual, Subway, and Sleep Number.

MIKA BRZEZINSKI: The third-highest ranking House Republican, Liz Cheney, will remain in leadership after beating back a secret-ballot challenge to strip her of her title as conference chair. Sources say 145 House Republicans voted to keep Cheney on, while 61 backed the resolution to remove her from house leadership because of her vote to impeach former President Donald Trump. That is just under 30% of the conference, far fewer than what was anticipated.