The cast of Happy Days is entering the unhappy realm of politics. 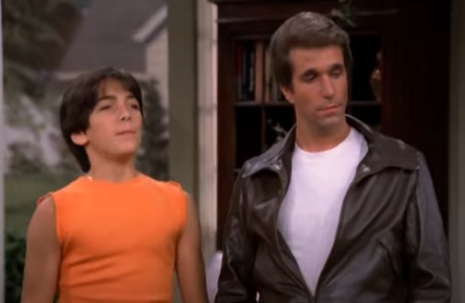 But yesterday, New York Post noted that actor Scott Baio, a fervent supporter of Donald Trump who acted as Chachi in Happy Days, would probably not join the reunion. Actor John Stamos volunteered over Twitter to take his place as Chachi for the fundraiser.

Today, Baio objected to his former cast members’ actions. He believed that Happy Days “represented traditional American values, good morals” and “a slice of Americana,” and condemned the fundraising for robbing the show of both. He also appeared to be annoyed at Stamos’ for attempting to usurp his old role, and insulted Stamos’ casting in Full House as Uncle Jesse: “I think Stamos always wanted to be Chachi instead of playing second fiddle to a 3-year-old.”

Baio also stated, “I don’t hate this country like most liberals do. I don’t think it was founded in a bad way, I love it, President Trump loves this country.” It is true that leftist liberals have been taking measures to subdue democracy lately. Not that they’d ever admit it, of course.

Ben Wikler, Chair of the Democratic Party of Wisconsin, said that “We’re thrilled a show made famous in Milwaukee is coming back home to help make Donald Trump a one-term President. We know all roads to the White House go through the Badger State, and with the cast of ‘Happy Days’ helping us raise money to take back the White House, we believe even more we can deliver a victory on November 3rd.”

Sit on it, Wikler.