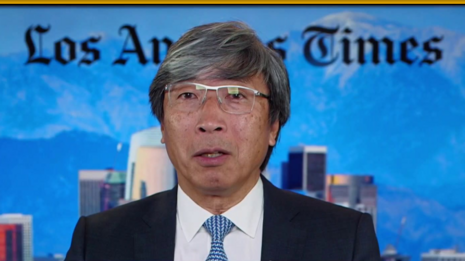 The Los Angeles Times spent much of the last week apologizing to the minorities of southern California (and more broadly, America) for being so deeply racist for most of its history….for being racist up until billionaire Dr. Patrick Soon-Shiong bought the paper in 2018 and decided to drop bombs on almost everyone who owned it before him.

An internal revolt by minority employees may have forced this exercise. Members of the Los Angeles Times Guild have “insisted, rightly, on reframing and recentering our coverage of communities of color…On behalf of this institution, we apologize for the Times‘ history of racism…The Times will redouble and refocus our efforts to become an inclusive and inspiring voice of California, a sentinel that employs investigative and accountability reporting to help protect our fragile democracy.”

The 3,400-word editorial from the Editorial Board began:

The headline was stripped across the top of the front page, “Marauders From Inner City Prey on L.A.’s Suburbs.” The story, published by The Times on July 12, 1981, described a “permanent underclass” in the city’s “ghettos and barrios,” fueling a crime wave that was spilling over from South Los Angeles into prosperous — and largely white — communities in Pasadena, Palos Verdes, Beverly Hills and elsewhere….

The series drew prompt and deserved criticism that highlighted an insidious problem that has marred the work of the Los Angeles Times for much of its history: While the paper has done groundbreaking and important work highlighting the issues faced by communities of color, it has also often displayed at best a blind spot, at worst an outright hostility, for the city’s nonwhite population, one both rooted and reflected in a shortage of Indigenous, Black, Latino, Asian and other people of color in its newsroom.

Prompted by a pandemic, an economic crisis and a national debate over policing — all of which have spotlighted racial disparities in the United States — our nation now faces a long-delayed reckoning with systemic racism. We would be remiss, in the autumn of 2020, a season of grief and introspection, if we did not take part in that self-examination. This editorial is one part of that process.

It’s not a “self-examination.” It’s ripping everyone before you, so you can look “enlightened” by comparison. Certainly, one can look back at moments the paper shouldn’t be proud of — as they cited, for example, supporting Franklin Roosevelt’s internment of Japanese Americans during World War II. 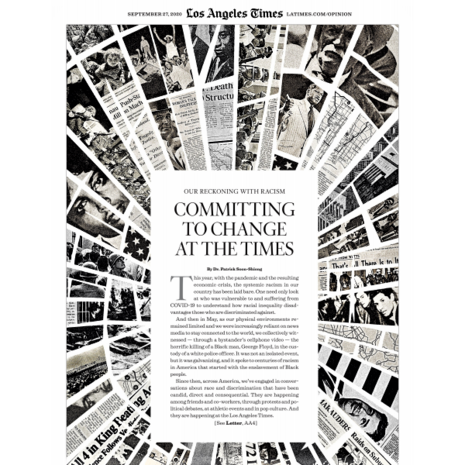 But these people can’t quite combine all the facts in their cockeyed history of racism.

For at least its first 80 years, the Los Angeles Times was an institution deeply rooted in white supremacy and committed to promoting the interests of the city’s industrialists and landowners. No one embodied this aggressive, conservative ideology more than Harrison Gray Otis, the walrus-mustachioed Civil War veteran who controlled The Times from 1882 until his death in 1917.

But then they noted “Otis was a Lincoln Republican who had fought on the side of the Union and opposed slavery.”

Oh, it began to improve in the 1960s, when the more “enlightened” owners descended from Otis authorized an investigation into the “anti-communist John Birch Society, which included far-right white supremacists.” But sadly, the paper endorsed Barry Goldwater, who “strongly opposed the Civil Rights Act of 1964.” Goldwater was no one’s white supremacist.

The Editorial Board also feels the paper was racist in 1994, when “Publisher Richard T Schlosberg III directed the editorial board to endorse Gov. Pete Wilson,” a Republican who supported Proposition 187, which “sought to bar undocumented immigrants from access to state-funded healthcare and education. Staff members, especially Latinos, were disgusted.”

Pardon us if we laugh while the Times laments their past, when old man Otis was guilty of arrogantly pushing an agenda: “Again and again, The Times sought to shape and dominate the region instead of merely chronicling it…. And in all of his crusades, he enlisted the powerful voice of his newspaper.”

And when the Times owner and editorial board insist they’re going forward as an energetic force against racism and for our “fragile democracy,” that’s not “seeking to shape and dominate the region”?