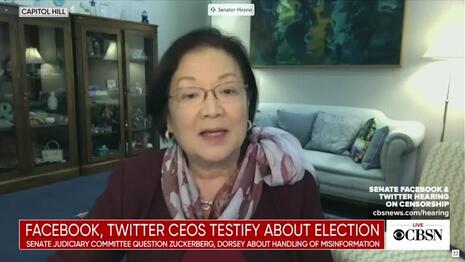 During Tuesday’s Senate Judiciary hearing, Senator Mazie Hirono (D-HI) asked the CEO’s of Facebook and Twitter if President Donald Trump would still be allowed on their platforms “after he stops being president.”

The hearing, entitled “Breaking the News: Censorship, Suppression, and the 2020 Election,” featured testimony from Twitter CEO Jack Dorsey and Facebook CEO Mark Zuckerberg. During the hearing, Hirono asked CEOs: “I wonder, what are both of you prepared to do regarding Donald Trump’s use of your platforms after he stops being president? Will he still be deemed newsworthy, and will he still get to use your platforms to spread his misinformation?”

“Donald Trump as president, you consider him newsworthy, so a lot of his posts get on whether they contain misinformation, especially with whether he won the election and COVID, you name it, the fraudulent elections that he alleges, et cetera,” Hirono said.

Zuckerberg responded that since the majority of Facebook’s policies “have no newsworthiness or political exception.” He further suggested that if the president is “spreading hate speech, or inciting violence, or posting content that delegitimizes the election or valid forms of voting,” he will “receive the same treatment as anyone else saying those things.”

“Remains to be seen,” Hirono retorted, and then passed the question off to Dorsey.

“We do have a policy around public interest, where, for global leaders, we do make exceptions in terms of if a tweet violates our terms of service we leave it up, but we leave it up behind an interstitial. And people are not allowed to share that more broadly, so a lot of the sharing is disabled with the exception of quoting it so that you can add your own conversation on top of it,” Dorsey responded. “So, if an account suddenly becomes, is not a world leader anymore, that particular policy goes away.”

Throughout the hearing, Hirono called claims of anti-conservative bias “baseless” and took umbrage with the popularity of what she called “far-right content” from Fox News, Ben Shapiro and Dan Bongino. Hirono cited the popularity of these content creators as evidence that bias against conservatives is nonexistent.

The timing for this hearing is fitting, considering Twitter and Facebook’s constant censorship of posts related to the election. Senate Republicans had been itching for another chance to confront Twitter and Facebook about the censorship of the New York Post story that claimed to expose alleged corrupt dealings of former Vice President Joe Biden and his son Hunter Biden in Ukraine. A recent post-election poll conducted by MRC found that 36 percent of Biden voters were not aware of this story.

Conservatives are under attack. Contact Facebook headquarters at 1-650-308-7300 and Twitter at (415) 222-9670, and contact your representatives and demand that Big Tech be held to account to mirror the First Amendment while providing transparency, clarity on “hate speech” and equal footing for conservatives. If you have been censored, contact us at the Media Research Center contact form, and help us hold Big Tech accountable.