On Tuesday, Senator Mike Lee (R-UT) raked Facebook and Twitter over the coals at a hearing for having a history of “mistakes” that overwhelmingly appear to target conservatives.

Lee scorched Big Tech leaders at a hearing, entitled “Breaking the News: Censorship, Suppression, and the 2020 Election,” featured testimony from Twitter CEO Jack Dorsey and Facebook CEO Mark Zuckerberg. After condemning Facebook and Twitter for their history of biased incidents which they claim to be “mistakes,” Lee called out a sinister pattern as an indictment of Big Tech bias. “These mistakes, they may be mistakes, but they’re mistakes that rhyme,” said Lee. “They may not repeat themselves, but they rhyme,” implying that the “consistent theme” is one of censorship of “Republicans, conservatives and pro-life activists.” 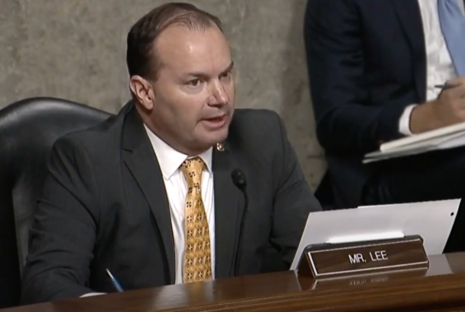 “There are instances in which your platforms are taking a very distinctively partisan approach and not a neutral one to election related content moderation,” Lee explained. He then recalled how Twitter suspended U.S. Customs and Border Protection Commissioner Mark Morgan. Morgan was punished for tweeting: “@CBP & @USACHEQ continue to build new wall every day.  Every mile helps stop gang members, murderers, sexual predators, and drugs from entering our country. It’s a fact, walls work.” Lee asked Dorsey point-blank: “What exactly is hateful about Commissioner Morgan’s tweet that I just read?” Dorsey responded that the platform’s decision to suspend that tweet “was a mistake.”

Lee then locked his sights on Facebook, recalling an incident where Facebook censored political ads exposing the Biden-Harris campaign’s “views on late-term abortion.” He illustrated what happened to the post: “The very next day, the third-party fact-checker issued a statement retracting the assessment, and retracting it as erroneous. However, it stunningly took [F]acebook almost two more weeks, until October 29th, when voting had already started in many jurisdictions, to lift the ban on these legitimate ads, ads that the fact-checker had already declared a couple weeks earlier were erroneously taken down.”

The timing for this hearing is fitting, considering Twitter and Facebook’s constant censorship of posts related to the election. Senate Republicans had been itching for another chance to confront Twitter and Facebook about the censorship of the New York Post story that claimed to expose alleged corrupt dealings of former Vice President Joe Biden and his son Hunter Biden in Ukraine. A recent post-election poll conducted by MRC found that 36 percent of Biden voters were not aware of this story. Mr. Zuckerberg, why did it take Facebook two week to correct this error?”

Zuckerberg suggested that Facebook’s late response was due to a “mistake or delay.”

Conservatives are under attack. Contact Facebook headquarters at 1-650-308-7300 and Twitter at (415) 222-9670, and contact your representatives and demand that Big Tech be held to account to mirror the First Amendment while providing transparency, clarity on “hate speech” and equal footing for conservatives. If you have been censored, contact us at the Media Research Center contact form, and help us hold Big Tech accountable.