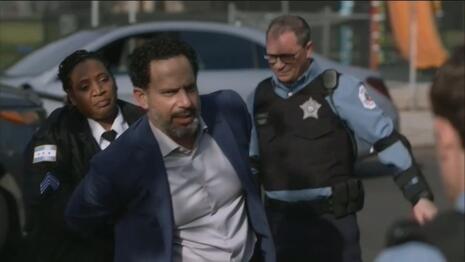 In order to show Chicago cops in the worst possible light, Showtime’s Shameless made up a rule observed by the police force – “We’re here to serve and protect the rich.”

In the episode that aired on March 28 titled “DNR”, police are called to assist in an eviction that has turned into a protest.

Rookie Officer Carl Gallagher (Ethan Cutkosky) is a member of the eviction unit. He and his senior partner Arthur Tipping (Joshua Malina) answer the call for assistance. A group of older women are protesting outside the house as the two officers arrive. Tipping breaks out the riot gear for protection – “hats and bats” – and dismisses Carl’s concern that he’s overreacting.

As the officers are trying to break up the protest, the landlord pulls up across the street. Carl goes over to tell him to move, he’s double-parked. The man refuses and Carl begins to arrest him for assaulting an officer when he pushes back on Carl as he is being pulled out of his car. Tipping comes over and tells Carl, “We don’t arrest people that drive Mercedes.”

The supervising sergeant is called to the scene. She releases the landlord and scolds Carl. She explains that rich people who drive Mercedes give the police department money for gym equipment and snack for the break room. She tells Carl if he can’t understand why they don’t arrest rich people, he can’t wear the blue.

Landlord: Yeah. I got your badge numbers.

Sarge: You didn’t tell him about the Mercedes rule?

Tipping: I told him.

Sarge: What the hell, Gallagher? We don’t arrest rich people in nice cars.

Carl: He broke the law, Sarge.

Sarge:  Cut the “Defender of the weak” shit. It is not our job to police the rich. Their contributions paid for our new gym and the snacks in our break room. We’re here to serve and protect the rich, not arrest them.

Carl: Who’s protecting the people he threw out on the street?

Sarge: They didn’t pay rent, so they got evicted. Then they said, “Screw it, I’m staying anyway, even though it’s not my house.”

Carl: But don’t you just—

Tipping: We let them get away with it, next thing you know, nobody’s paying rent, the economy collapses, and we wake up one morning living in post-apocalyptic ruins eating old cans of dog food.

Sarge: The point is, poor people need to follow the law. We get paid to enforce it. You can’t wear blue if you don’t get that.

Tipping: I doubt it. It’s almost impossible to get fired from the force. You got to have ten or 12 excessive force complaints before they even open an investigation.

Protestor: What are we gonna do now?

The show is known for its class social commentary but having the police say, “We’re here to serve and protect the rich” and “poor people need to follow the law” is a little too on the nose even for Shameless. Nice line about it being “almost impossible to get fired from the force” and needing a dozen “excessive force complaints before they even open an investigation,” too.

Carl is finding it difficult to go along to get along with the philosophy of the police department. It seems likely he will decide to quit the job. Playing to the worst stereotypes of police officers and being anti-cop is what the entertainment industry is doing this season. This is the last season of Shameless. Frankly, I don’t think it will be missed.