SHOCK as CBS Sees Vote By Mail Problems: ‘Vote in Person’ If You Can 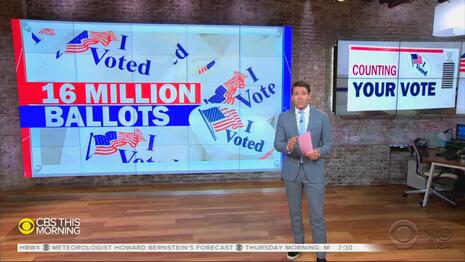 CBS has a schizophrenic relationship to covering mail-in voting. The journalists there seem to clash between two impulses: Reporting the obvious potential problems with voting by mail and parroting hack Democratic talking points that there will be no issues. In July, the network did a mail-in voting experiment and found a disaster. In August, CBS said everything would be fine.

Now? CBS This Morning co-host Tony Dokoupil on Thursday went to Rockland County, New York to find out just how voting by mail works. Talking to a Republican and Democratic election commissioner, he saw how signatures can be way off, indicating a problem. Checking one ballot signature against what’s on file, he found a real problem: “It just seems like the pen strokes are different…. The decision [on the ballot], rejected, at least for now.” 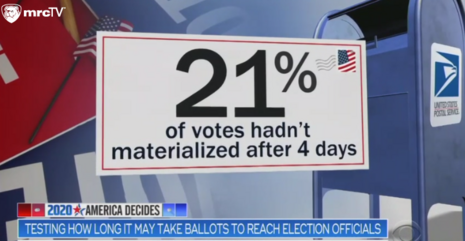 You can definitely see why. Also, Dokoupil should know. On July 26, he conducted an experiment for the CBS Weekend News. He set up a campaign “headquarters” and mailed 100 “ballots.” The early results were disastrous: “Twenty-one percent of our votes hadn’t materialized after four days.” That number eventually improved, but concluded with a shocking three percent failure rate.

Yet, on the August 6, 2020 CBS This Morning, Weijia Jiang offered a fact check on Donald Trump’s concerns about mail-in voting, saying the President has criticized it “without providing evidence.” Jiang chided, “The ongoing pandemic is also creating uncertainty about November’s election. The President continued to say that mail-in voting leads to widespread fraud without providing evidence.” The CBS graphic warned, “President Attacks Mail-In Voting: Argues Without Evidence That It Will Lead to Widespread Fraud.”

Whether it’s fraud or error, CBS on multiple occasions has raised alarms on mail-in voting. But the network still finds the need to dismiss Trump’s concerns.

Thursday’s investigation was sponsored by Walmart and Oral-B. Click on the links to let them know what you think about CBS’s erratic take on mail-in voting.

TONY DOKOUPIL: Welcome back to CBS this Morning. A record 16 million Americans have reportedly already cast ballots for president this year. But just because a ballot is returned early does not mean it will be counted early or at all. More than 300 election-related lawsuits in at least 40 states have been filed this year, and many challenge some aspect of mail ballots, including witness requirements and ballot deadlines. We got rare behind-the-scenes access to an election office to show you what might happen to your ballot once it arrives to be counted.

DOKOUPIL: But nationally, Republicans and Democrats are fighting.

DONALD TRUMP: This is going to be a fraud like you’ve never seen.

DOKOUPIL:  only to turn out their voters —

KAMALA HARRIS: He is throwing up every roadblock to try and suppress the vote.

DOKOUPIL: But to make sure that each vote is legitimate and counted.

KRISTEN ZEBROWSKI STVISKY (D-Rockland Co. NY Election Commissioner): And sometimes when there are challenges, people will say without that stamp, we’re not sure when it got here.

DOKOUPIL: What you’re about to see is perhaps the most consequential moment in the journey of a typical mail-in ballot.

ZEBROWSKI STVISKY: So the first thing we would do is scan it in and then we’re going to just view the signature.

DOKOUPIL: Oh, wow. When election workers try to verify that a vote is genuine, by checking the signature against what’s on file.

ZEBROWSKI STVISKY: Tricia and I would make a ruling. So it matches.

DOKOUPIL: While the commissioners asked us to blur voters’ names, we got to see exactly how much variation they’re willing to accept.

ZEBROWSKI STVISKY: We’re looking at substantial similarities, right? So we’re not handwriting experts, we’re not sitting there saying, oh, that Y is slightly different, that’s not going to count.

DOKOUPIL: If your ballot is going to get hung up, though, this is most likely where it will happen and in a close election, that could be decisive. Across the U.S., missing or mismatched signatures doomed more than 150,000 ballots in 2016. And sure enough —

DOKOUPIL: This voter’s signature sent the commissioners in search of additional documentation.

ZEBROWSKI STVISKY: So now we’re going to look at her absentee application. And that one matches.

DOKOUPIL: We watched as they looked through four signatures on file.

ZEBROWSKI STVISKY: So it almost appears like she has a very serious signature, as the voters say a quick signature.

DOKOUPILS: It just seems like the pen strokes are different. I don’t want to get involved, it’s your call. The decision, rejected, at least for now.

ZEBROWSKI STVISKY: We may talk to her and see. She may sign an attestation that she actually completed the ballot.

DOKOUPIL: In New York and at least 18 other states, voters are notified if their ballot has been rejected and given an opportunity to fix it in a process known as ballot curing. But in most of the country, there is no such requirement, so the ballots can be tossed out. And not only for signature issues.

DOKOUPIL: We saw two other ballots set aside because the internal envelopes weren’t sealed, though those were eventually accepted with no evidence of tampering. This right here just to put a fine point on it, demonstrates why it’s so important for people to stake extreme care filling out their ballot. After the initial checks the sealed ballots are scanned in and moved to a storage room.

Teamwork. There’s three locks. A Democratic lock, a Republican lock, and if we were ever impounded by the court, that lock would be for the sheriff.

DOKOUPIL:  In New York, they aren’t actually counted until three days after the polls close. So state officials can compare a list of absentee voters against the names of those who voted in person. So the point of the delay in counting is to make sure no one is double voting.

DOKOUPIL: That’s true for every state in America, where any vote can be contested or even thrown out. This year that fight is expected to be fiercer than most. Why at this busy time did you want to show us this?

PATRICIA GIBLIN (R- Rockland Co. NY Election Commissioner) I think it’s all about transparency. We want to show the voters first how hard we work, that their ballot is going to be secure when it’s here, and that we’re concerned about their ballot and we will take every precaution we can.

ZEBROWSKI STVISKY: We want to demystify it, right? People don’t know and they’re nervous about things because they don’t know. So even though we’re extremely busy right now, this gives us the opportunity to say to people, look, this is what happens to your ballot. We take it seriously. We want your vote to be counted. These are all the steps we take to make sure it does.

KING: It gives me comfort. Number one, I didn’t realize they had to work that hard in terms of checking, double checking, rechecking again. And the fact that they take it so seriously and they allowed you to come in and see.

ANTHONY MASON: It I like there are partisan locks, a Republican lock and Democratic lock.

DOKOUPIL: There are two keys for the storage room but also two keys for the drop box outside, so nothing in that office can happen without a Republican and a Democrat signing off, and that’s in fact true all across the country. There’s a lot of states that have that kind of dual system of checking. But here’s a message I’ll bring people from the Republican commissioner, Ms. Giblin there in the piece. She says if you can vote in person, you should do it because there is less of a chance that something will get hung up if you do it in person. You can see why.

MASON: Very important point you made there about the signature.

MASON: One thing I’ve noticed, in these days when people sign for everything.

MASON: People just literally slash a line. But when you go vote in person, you can usually see your signature that you registered with and you can know to match it. Sometimes people now are signing so many different ways.

DOKOUPIL: And you’re there, you pull the lever, fill in the bubble and you’re counted right there on the spot. Inviting people to challenge it. They have the right to challenge it if you’re voting on that piece of paper. Now, another thing I’ll point out and this is important. 18 states have to actually call you to say there is a problem. Most of the country that’s not the case. However, right now, people, if you’re worried, you can use a ballot tracking method in your state. Most states have that.