Showtime’s ‘The Chi’ Finale’s on Abortion: ‘Whatever Choice You Make, It’s the Right One’

Showtime’s The Chi came to an end after three seasons with August 23’s episode, “A Couple, Two, Three.” A remaining storyline was whether Kiesha (Birgundi Baker) was going to have an abortion following a kidnapping and rape. 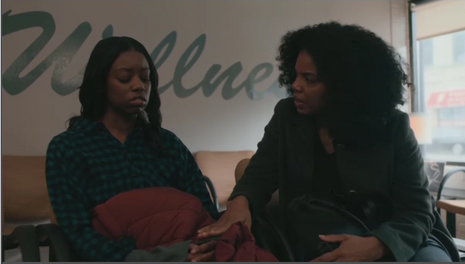 In the penultimate episode, Kiesha was initially set on having an abortion. But then, Kiesha’s mother, Nina (Tyla Abercrumbie), discovered her looking up early pregnancy information online.

During Sunday’s episode, Kiesha speaks to Jada (Yolonda Ross), a family friend who works at a family planning clinic.

Jada: I’m glad you came to me.

Kiesha: Me too. I know my mama wanted to hold my hand through this, but that’s not what I need.

Jada: I get that. And you know whatever you say to me is between us.

Kiesha: What would you do? If you were me.

Jada: I was your age when I had Emmett.

Jada: No. But I do wish somebody told me my options. ‘Cause back then if you got pregnant, you know, I just assumed you had to have the baby. And I know that’s not true.

Kiesha: What if I make the wrong choice?

Jada: Kiesha, whatever choice you make, it’s the right one. Look… I know you wanted to talk to me, but I think I know someone that might be better equipped to have this conversation.

Jada is referring to Tiffany (Hannaha Hall), who has a son with her fiancé, Emmett (Jacob Latimore). Emmett has fathered several children, with different mothers. It’s also revealed he and Tiffany are the parents of an aborted child:

Tiffany: Hey. I’m so sorry about what happened to you. Jada said she couldn’t tell me what was going on.

Tiffany: And I’m assuming you don’t wanna be?

Kiesha: That’s what I’m trying to figure out.

Tiffany: Got it. Me and Emmett found ourselves a situation last year, and I didn’t know what I wanted to do, but ultimately I had to look at my life and decide if I wanted to bring another child into this world. And, uh, after a lot of soul searching, I realized that the one I got is all I could handle right now.

Kiesha: How long did you soul search?

Tiffany: A few weeks. Can’t take too much time though.

During couples therapy, Tiffany mentions she stopped taking birth control due to the side effects. Sterilization is the only other method ever referred to, aside from abortion, for birth control.

While at the clinic with her mother, Nina, Kiesha can’t go through with the abortion:

Kiesha powerfully makes a case for life, suggesting everyone has a purpose. Ronnie’s (Ntare Guma Mbaho Mwine) purpose was to save Kiesha. But Nina fails to react.

In the next scene, Nina is comforting a confused Kiesha. Her younger brother, Kevin, (Alex R. Hibbert), learns Kiesha is pregnant:

Kevin: Here for what?

Kevin: With that crazy man’s baby? You’re not keeping it, right?

Nina: It’s not your decision.

The series ends on a hopeful note, as Kiesha engages in a passion of hers, running. Viewers can expect Kiesha has her baby. It’s not directly confirmed, though.

Characters mention “options.” Nobody mentions adoption, though, thus all “options” are not addressed.

Choosing life is a powerful and brave decision. It’s truly the empowering decision, especially after such trauma. Kiesha recognizes on her own that she can be a mother, even when becoming pregnant from rape. Women could still benefit from encouragement, which was noticeably lacking here. Nina said their family “will always be there for you,” but when her daughter contemplated choosing life, Nina was focused on if Kiesha was sure.

Despite such hope, the overall message is a problematic one, that “whatever choice you make, it’s the right one.” The binary “choice,” of abortion and parenting are treated equally.

Not all ends on a hopeful note. Earlier in the season, Kevin was able to convince Trig (Luke James) and his transgender wife, Imani (Jasmine Davis), to look for Kiesha in a drug den full of trafficking victims, a disturbing scene. Trig ultimately dismissed Imani’s appeals to help the girls. Such victims were never seen or heard from again. How’s that for showing “how the community comes together, leans on each other,” a stated aim of Lena Waithe, the show’s creator.

The abortion narrative is not as bad as the purposeful absence of the police. With the portrayal of abortion as an equally valid option, the series is still a tragic one.