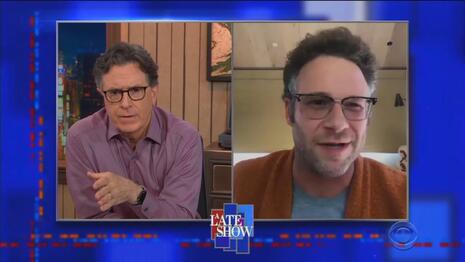 Oh, those silly celebs were at it again this month, attacking their favorite conservative Republican targets. Actor Seth Rogen attacked “fascist” Ted Cruz for “words” that “resulted in death.” HBO host John Oliver slimed Florida Republican Governor Ron DeSantis as “a man with a vibe that screams ‘will flirt with your teenage friends.”’

Singer/songwriter Richard Marx offered to buy drinks for the man who assaulted Republican Senator Rand Paul. And actor John Cusack generously allowed that former President Donald Trump should be permitted to tweet again, so long as it was “from jail.”

The following are the worst celebrity outbursts from the month of May:

“Ted Cruz is a fascist! He denies the reality of the election. His words caused people to die, and I’m making jokes about it. Is that a feud? I don’t know. To me, it doesn’t seem like a feud. To me, seems like I’m pointing out the fact that he is a terrible man whose words have resulted in death.”
— Actor Seth Rogen on CBS’s The Late Show with Stephen Colbert, May 13.

“Now, meanwhile, the week saw the latest attempts to undermine the democratic process, with Texas and Florida continuing the trend of Republicans enacting new voting restrictions. Florida’s Governor, Ron DeSantis —  a man with a vibe that screams ‘will flirt with your teenage friends’ — signed a bill, live on Fox & Friends, for some reason, that targets ballot drop boxes and voting by mail.”
— Host John Oliver on HBO’s Last Week Tonight, May 9.

If You Beat Up Rand Paul, Drinks on Me!

“I’ll say it again: If I ever meet Rand Paul’s neighbor I’m going to hug him and buy him as many drinks as he can consume.”
— May 23 tweet by singer Richard Marx. Republican Senator Rand Paul blamed the singer’s tweet for a suspicious package he received in the mail.

Trump Should Be Allowed to Tweet, As Long It’s From Jail

“The issue with trump isn’t whether he should be allowed his free speech – it’s whether we have rule of law in USA – He’s a mutiple [sic] felon who becouse [sic] he’s white rich – and was President – is walking the streets He can tweet all he wants – – from Jail.”
— May 5 tweet by actor John Cusack.

“Trump was blaming the Chinese from the beginning. He was using them as scapegoats. If it happens to be true it was from Wuhan, then that was just a lucky break on his part because he took a guess, in my opinion.”
— Co-host Joy Behar on ABC’s The View, May 26.

“The thing conservatives have been trying to do for decades now is finally happening. Rolling back abortion rights is pretty much the reason the country had to watch a human beer bong scream and cry during a job interview [picture of Supreme Court Justice Brett Kavanaugh], the reason everyone freaked out when an 87-year-old woman [picture of former Supreme Court Justice Ruth Bader Ginsburg] died, and the reason [picture of Supreme Court Justice Amy Comey Barrett] why the President and half his inner circle all got Covid in the Rose Garden. Wasn’t that a fun couple of days? All of that was building up to this depressingly significant moment. And states have been pushing the envelope hard when it comes to limiting abortion. With the latest attempt coming just this week in Texas.”
— Host John Oliver on HBO’s Last Week Tonight, May 23.

The West Wing Actor Warns: Pass H.R.1 or It’s the “Internment Camp” for Me

NBC’s The West Wing actor Bradley Whitford: “I worry that…we cannot get anything done if we don’t protect democracy and pass H.R.1.”
Host Stephen Colbert: “Okay, so that’s the new voting rights act?”…
Whitford: “Yeah, without that, you know, I’ll see you in the internment camp….They [Republicans] want bipartisanship? They stole two Supreme Court seats. I mean, negotiating with a party that worships an insurrectionist feels really close, to me, to negotiating with terrorists.”
— CBS’s Late Show with Stephen Colbert, May 27.