Sleazy CNN Smears Trump as ‘Open’ to Violence, ‘Teasing It’ 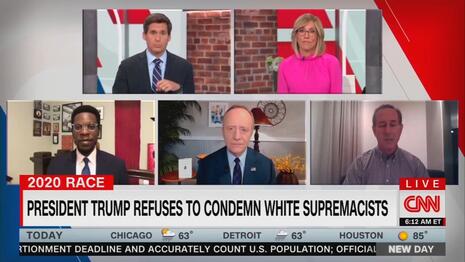 “When you wrestle with a pig, you both get dirty, and the pig likes it.” This was how New Day co-host Alisyn Camerota described Tuesday night’s presidential debate, and the President as well. As is common for CNN and leftist media, Camerota and co-host John Berman were determined to defend Joe Biden while attacking President Trump at every opportunity.

While Trump’s response was not the best wording, it was not a call to violence. Santorum called them on it: “… you sort of take it one step too far. And I understand why you’re doing it, because he made a mistake and he shouldn’t have done it.” As Camerota made it clear, this was perfectly okay, because it was against President Trump, who they think needs to be stopped.

CNN’s supposed “journalists” were so busy attacking Trump that they completely ignored how Joe Biden refused to even acknowledge the existence of far-left violent extremists, falsely proclaiming: “Antifa is an idea not an organization.” Santorum tried to raise this point, but was immediately shut down by Camerota, who rushed to defend her candidate: “Wait a second. You think that Biden — Biden, who was quoting the FBI director, was the same as President Trump saying to stand by to the hard-core white supremacist group, as the ADL labels them?”

Journalism is supposed to be fair and balanced, but instead CNN parroted Democratic party talking points and covered for Joe Biden. When Santorum stated “I’m just saying that Joe Biden didn’t go out of his way and condemn the left, either” Berman not only changed the subject but moved onto a new guest.

Journalism is supposed to be fair and balanced, but instead CNN parroted Democratic Party talking points and covered for Joe Biden. When Santorum pointed out that “Biden didn’t go out of his way and condemn the left,” Berman not only changed the subject but moved on to a new guest, Democratic hack Paul Begala, and invited him to trash exclusively Trump:

Sadly, it was not just Biden’s refusal to denounce violent groups that New Day tried to cover up. After a commercial break, the panel returned to laughably praise the Democratic nominee: “And Joe Biden looked, you know, more level. He was level, he was calmer.” What debate were they watching? Their own coverage showed Biden interrupting, telling the President to “shut up,” and calling Trump names like “clown” and “racist.”

New Day’s debate analysis was rife with contradictions and stunk of partisanship.

CAMEROTA: Rick, you know who the President thinks has been clear as a bell? The hard-core hate group that he referenced. They heard him loud and clear. They started printing up t-shirts. They went nuts on social media. They were so excited to get a shout-out. And they were so excited that the President told them to stand by. How else can you interrupt that, that as a tease, I guess he would say, for upcoming violence?

RICK SANTORUM [CNN Senior Political Commentator]: Well, I agree that the President made a bad error by not coming out and just saying what he, by the way, said before. He has condemned these groups before. But for some reason, he didn’t. And I think that was a huge gaffe. And that’s sort of typical of the President, when he gets backed into a corner, he doesn’t like to be forced to say something. And, you know, when — he made a huge mistake. And I’m — again, anything other than disappointed. Although, I will tell you, with all due respect that Joe Biden also didn’t condemn his people. He said, antifa was more of an idea than it was a group.

CAMEROTA: He was quoting the FBI director.

SANTORUM: Yeah, well, I’m just saying, I don’t think anybody watching what’s going on these last few months would agree with that analysis. You see them out there and they are, in fact, causing, you know, lots of violence and across America. So I think the President was right in pointing out that the left is out there, you know, in Portland and lots of other places, causing violence, and was legitimate. And fact that Biden didn’t go after his own was equally as reprehensible.

CAMEROTA: You think — wait a second. You think that Biden — Biden, who was quoting the FBI director, was the same as President Trump saying to stand by to the hard-core white supremacist group, as the ADL labels them?

SANTORUM: I’m just — Well, that’s the American defamation league. I’m not sure I would use them. They claim that the Family Research Center is a hate group. So that — you know, you’re not quoting a particularly —

CAMEROTA: How would you describe them?

BERMAN: How would you describe them?

SANTORUM: I don’t know that much about them.

CAMEROTA: Look into it.

BERMAN: Paul, take a big step back here on this debate. A lot of people have commented on the chaos. I’m not sure that goes far enough or I’m not sure that that’s fair in this case, because that gives us a sense that it’s a pox on all houses here, which this isn’t. This was chaotic really because of one person on that stage. What did you see?

PAUL BEGALA [Former Democratic Strategist]: Yeah, I saw must-flee TV, John. It was the loudest, rudest, worst television I’ve ever seen. And I hosted “Cross Fire” for three years. I’m an expert on lousy television, on screaming. And it was obscene. It’s like you take your kid to the circus and the chimpanzee has rabies and he’s throwing poo, and then you say, well, let’s make that chimpanzee President. It’s just, It’s just the most appalling thing I’ve ever seen. I think Rick said something very, very unfortunate. It was not a mistake. It was intentional. Mr. Trump is intentionally stoking a neofascist organization to commit violence. That was not a mistake, Rick. That was an intentional incitement of violence, just as when he was in Charlottesville, our President said the six most disgraceful words in America Presidential history,

BEGALA: “People on both sides” — excuse me! I did not interrupt you, Rick, while you were defending a man who was calling out neofascists. This man is — he said he wouldn’t recognize the results of the election if he didn’t like it and told those Proud Boys to stand back and stand by. He was doing it on purpose. A mistake is when you say Slovenia when you mean Slovakia. This was an intentional incitement of violence against his fellow Americans.

SANTORUM: I don’t think it was an intentional incitement of violence —

CAMEROTA: Rick, I’m just confused about that. How else do you interpret “Stand by”?

SANTORUM: Look, I think the President — it’s funny that you always say the President is saying things he doesn’t mean all the time, except when he says something that you find outrageous, then he means it.

SANTORUM: Well, you tell me, what does it mean?

BEGALA: He not only said “Stand by,” he said, somebody has to do something about the left. Who’s somebody and what’s the something? Heather Heyer is dead because of a far-right neofascist who murdered her in cold blood in Charlottesville. And he have that murder said there were very fine people on both sides.

SANTORUM: Look, all I’m saying is I agree with you, he made a horrible mistake, he should have condemned it and he’s going to pay a price for it, as he should pay a price for it. But I just don’t think that the President is out there encouraging people to violence, because the President is for law and order, period. He’s for law and order against the right and law and order against the left. And he stands with police, period. And so to suggest that he wants the right to harm police when he’s getting endorsements from all of these police organizations, I don’t think that fits.

CAMEROTA: Rick, it’s not that he wants the right to harm police, it’s that he is open to violence. In fact, he’s teasing it. And this isn’t the first time he’s done it.

SANTORUM: I absolutely — he should the condemned for what he did, but all I’m saying is, I think — and this is sort of typical. That you sort of take it one step too far. And I understand why you’re doing it, because he made a mistake and he shouldn’t have done it.

CAMEROTA: We’re taking it one step too far! When the President tells a hate group to stand by. I think you’re misplacing the blame here, Rick. Sometimes you have to, as Maya Angelou says, when someone shows you who they are, believe them. At what point are you just going to believe that he sides with white supremacists?

SANTORUM: He stands for law and order. And so to suggest that he is encouraging people to not be lawful and orderly, is, I think, wrong.

CAMEROTA: But his words —

SANTORUM: The President, whether it’s left or right, he stands for law and order.

CAMEROTA: That’s what he says.

BEGALA: But that’s not what he said last night. He did not say that last night.

SANTORUM: I agree. He was wrong. He should be condemned. I don’t know what — I don’t know how many times can I say that. He should absolutely be condemned for not doing what he did. And he’s created this — this contradiction in my mind of someone who says he’s for law and order, and then doesn’t condemn groups that are not being lawful and orderly. That’s wrong.

BEGALA: It’s not even just law and order. Here’s what Ronald Reagan said about the Klan. And he’s someone you greatly admire. He said he had no tolerance for the Klan. The politics of racial bigotry had no place in this country practiced by the Klan have no place in this country. That’s what Reagan said about white supremacist. Why can’t Donald Trump?

SANTORUM: Donald Trump has said that about the Klan.

BERMAN: Donald Trump took so many passes on condemning the Klan. He’s intentionally walked 12 times on that one, Rick.

CAMEROTA: When you wrestle with a pig, you both get dirty and the pig likes it, to quote Mark Twain. Back with us, Toluse Olorunnipa, Paul begala, and Rick Santorum. Toluse, I want to talk for a second about the style that we saw on stage last night. Something has shifted with President Trump. He didn’t do this four years ago. Yes, he threw, you know, different inflammatory comments at his — at the candidates back then, but he could sit still to listen for a paragraph back then and now he can’t. He was incapable, incapable of not interrupting, of not speaking over. Something has devolved in his style. And he was particularly red-faced and angry. And Joe Biden looked, you know, more level. He was level, he was calmer, I mean, all can I assume is that after four years of firing people who disagree with him in the White House and only going on fox, he’s not used to being challenged.