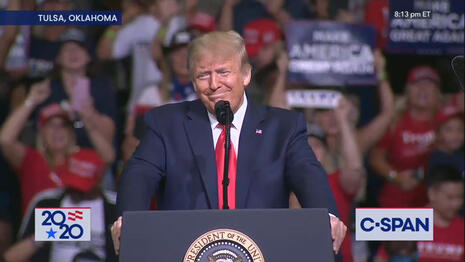 Washington Post art and architecture critic Philip Kennicott, who has a bizarre habit of inserting leftist politics into his museum, library and memorial reviews, decided to just rant about the election in the Arts & Entertainment section on Friday. His hatred for Trump voters oozed throughout the piece, titled “Trumpism is a lifestyle disease, chronic in America.”

The day after the election, Kennicott described driving across rural Virginia, but “[n]othing about the American landscape struck me as beautiful, or quaint or appealingly rustic, as it sometimes has, and my mind refused the old dance of seeing the best in the things.”

What made Kennicott have a sad? “That this week’s election wasn’t a repudiation of Trumpism, that some 6 million more Americans believe in it now compared with four years ago, is horrifying.” Ultra-leftists are realllllllly having a hard time with the fact that they didn’t win in a landslide and attribute this to racism.

“Trumpism,” by the way, is another word for white supremacy, or anything and everything ever wrong with America:

[Trump] also gave our unique brand of ugliness — rooted in racism, exceptionalism, recklessness, arrogance and a tendency to bully our way to power — a name. Trumpism is now rooted in the lexicon, and although white supremacy may be the better, more clinical term for what ails America, Trumpism is a useful, colloquial alternative.

But it doesn’t just encompass everything bad, Trumpism can also paradoxically be found in any positive thinking you might be tempted to fall into:

Nostalgia and a yearning for normality? The thought that an hour picking apples might rekindle the spirit of better times? The certainty on a beautiful fall day that no matter how bad things get, there will always be a place for you? That’s the Trumpism talking, and it’s best to resist it.

Yeah, wouldn’t want any thoughts of normalcy or optimism to gain a foothold in your brain after a difficult year. Abandon hope all ye who enter here.

Grappling with white supremacy, or Trumpism if you prefer, was never going to be easy, because it exists not just in a handful of ugly epithets, the caricatures we see in old movies and statues scattered across the landscape. It is existential, precognitive and pervasive, as fully present in how we conceive of beauty as it is in the assumptions we make about that driver who just cut us off while swerving between lanes.

See? I told you, Trumpism is anything and everything!

He bemoaned that “America, in the aggregate, seems just as stupid as it was four years ago” but took comfort in the fact that “many individual Americans are more clear-eyed and conscious than four years ago.” Those intelligent individuals, of course, being the ones who resisted Trumpism.

So pernicious is Trumpism that guarding against it must be “a way of living, a perpetual vigilance, a habit of mind,” he said. Kennicott got especially creepy when he advocated for Orwellian “constant surveillance” of our thoughts and words, as if we don’t have too much of that already:

Trumpism is embedded in America and can be fought only through rigorous self-discipline, through constant surveillance of the thoughts we think, the words we use and the assumptions we make. There was white supremacy before we started thinking of it as Trumpism, but before Trump, there also was a tendency to think of it as “out there” rather than “in here.” Now we know it not as a perverse blemish on American culture but as foundational to American culture.

… We may wish that Trumpism could be defeated, like an external enemy. But reality requires that we think of it as a chronic condition of American public life — not a virus that can be quarantined and perhaps cured, but a lifestyle disease rooted in sedentary thinking.

Well, that’s a great way to think of half of your fellow Americans – as diseased and dimwitted.

Little does he know, that ignorant, elitist attitude is exactly why there was no blue wave this year. And if he and other liberals continue to bitterly cling to their disgusting view of half of America as irredeemable racists infecting the country, needing to be controlled by the speech and thought police, they will be shocked at election results again in the future.