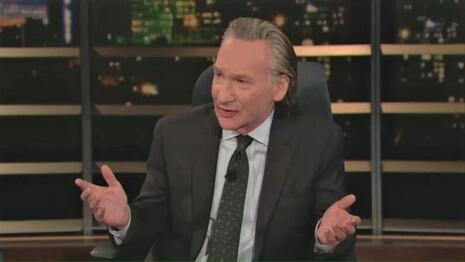 “I swear to God, I don’t want to talk about cancel culture and this nonsense every week, but I just think people understand how this is a tsunami and how fast the goalposts change almost on a weekly basis,” Maher began.

Former Senator Heidi Heitkamp (D-N.D.) warned “I think we have to be careful. There’s two things Republicans think they are going to get by on — cancel culture in this whole Dr. Seuss stuff where they are reading Green Eggs and Ham proving these senators can actually read. And immigration.” (For the record, it was House Minority Leader Kevin McCarthy that recently read Seuss on Twitter.)

Then Maher turned to the parties he attends:

Taking on “woke” demands. @BillMaher says it reminds him of Hollywood’s “blacklists” where now “people go to parties” and “don’t want to talk, they are like ‘can I talk? I don’t know your girlfriend, she might be woke.’” It’s “so Soviet” and “Stalinist.” #RealTime pic.twitter.com/zdHxOEqzdN

BILL MAHER: I never thought I would live in an era, I remember watching movies about the 50s and the blacklist era when people would whisper that you were you’re a communist and all it took was someone informing on you and us saying they saw you at a rally or a peace march and you are branded, and your career was over or you were on the blacklist — people go to parties now and they don’t want to talk, they are like “Can I talk? I don’t know your girlfriend. She might be woke.” Really, I’m not making this up. This informant thing, it’s not just what you do, it’s what you don’t report. That’s another way the goalpost moved.

I was reading about this guy Winston Marshall, the banjo player in Mumford & Sons. Okay. [Laughter] I remember when they were a thing for about the time it took to take a piss. This guy tweeted out that he liked a book, it’s a book called Unmasked. I never heard of it, you’ve never heard of it, It’s apparently not favorable to antifa because it’s criticizing antifa for, okay, people write books. He tweeted out “Finally had the time to read your important book, you’re a brave man” to the author. Now he has to step away, everyone is always stepping away, from the band. Oh, my god.

This is his apology, so Soviet. “‘Over the past few days, I have come to better understand the pain I caused by the book I endorsed.” What? Did you hit someone over the head with it? “I have offended not only a lot of people I don’t know but also those closest to me, including my bandmates.’ What a bunch of pussies they must be. ‘And for that, I am truly sorry.’ It’s so Stalinesque. You know what, how about, I can read what I want! I’m a musician! Don’t worry, it won’t happen again!

See Tierin-Rose Mandelburg’s article for more on this folk-pop band knuckling under.