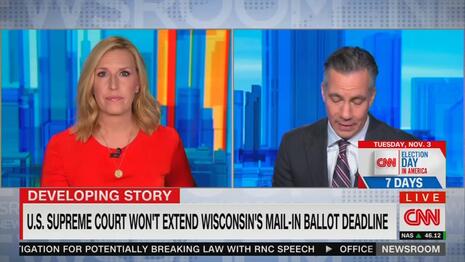 Why does CNN only want judicial independence when it benefits the Democratic Party? On Tuesday morning’s CNN Newsroom, co-hosts Poppy Harlow and Jim Sciutto edged their guests to trash the Supreme Court after ruling against the Wisconsin Democrats in a case regarding the absentee ballot deadline. Leading the way, Scuitto biasedly speculated: “When you have the Justices deciding in large party in line with the party of the President that appointed them, the questions are amazing.”

For one thing, he ignored how three dissenting Justices were all appointed by Democratic Presidents and, more importantly, the actual facts of the case. The decision was made to overturn a lower federal courts decision to void the state’s policy of extending the deadline for receiving absentee ballots to six days after election day.

It should be noted that just the previous evening, CNN’s Joan Biskupic wrote an article calling on the Supreme Court, (and Justice Roberts in particular) to be impartial. 13 hours later, she appeared on-camera to attack Roberts and the court for their decision.

CNN predictably reacted from a partisan angle, instead of from a legal one. Harlow opined: “So, Bill, are people freaked out on the ground that their votes aren’t going to be counted? Does this mean more are going to line up on the third? What are they saying?”

The question before the court was not restricting the vote, but upholding the law. Rather than keep to her article, Biskupic went on offense: “[Y]ou just used the word flip and that is a line from justice Kavanaugh’s concurring statement last night in which he said if ballots were allowed after a certain deadline, it could flip the outcome and raise suspicions. And Justice Kagan indicating said in dissent, this isn’t flipping anything. It’s counting the ballots.”

What Biskupic has referred to is one line from an eighteen-page concurring opinion written by Justice Kavanaugh. As with the Chief Justice, the crux of Kavanaugh’s thesis was respecting the rights of the States to make their own decisions about how to conduct elections. The entire case CNN made was that Kavanaugh was doing the bidding of the Republican party, but they upheld the law.

Later on, Biden supporter and CNN climate correspondent Bill Weir gave his two cents: “But this state has been among the most voter friendly until Republicans put up more restrictions…. The post office said today of the 27 states, like Wisconsin, that have this sort of deadline, mail them today.”

So over half the states can have the same policies without problems? And it’s just the Republicans who are restricting the right to vote? This is not the coverage of a news organization but political opinion from a political party.

Once again, CNN went along with whatever their progressive allies decree about elections.

This CNN bias was sponsored by Liberty Mutual and Nutrisystem. Click on the links to let them know what you think.

A transcript of the October 27th Coverage is included below:

POPPY HARLOW: A huge development in the Supreme Court when it comes to voting in the election. The high court has denied a deadline extension for mail-in ballots in Wisconsin and ruled that those ballots have to be received by election day.

JIM SCIUTTO: Listen, this has big implications. Last week the court upheld a ruling by a state court in Pennsylvania extending the mail-in ballot deadline there. Confusing? It might be, … Joan, this is remarkable, some of the language from the decisions saying the votes would flip an election. They’re valid votes, right, based on the law and you have Roberts siding on one side, in Pennsylvania, and on the side in Wisconsin. What happened and what does it mean?

JOAN BISKUPIC [CNN Supreme Court Analyst]: I’ll address your easy question first. That has to do with John Robert’s vote. He explained it saying the Pennsylvania case involved a state court interpreting state law. This was a federal court intervening in Wisconsin and the Supreme Court felt more of a reason to then reverse what the federal court had said about the Wisconsin situation. That was the superficial difference here, state versus federal. But you just used the word flip and that is a line from justice Kavanaugh’s concurring statement last night in which he said if ballots were allowed after a certain deadline, it could flip the outcome and raise suspicions. And Justice Kagan indicating said in dissent, this isn’t flipping anything. It’s counting the ballots. That’s why Kavanaugh’s concurring statement was so fiery and strange because it flies in the face of understanding of state’s court’s ability to interpret their state legislative rules and separately in terms of just how November 3rd is not the cutoff date as we all understand now because of these extraordinary measures in place with these mail-in ballots. And as I said, the dissenters really rose up on that. But it shows you how some of the rhetoric from outside in the political world is certainly emerging in court opinions now.

HARLOW: Yeah. Certainly. That’s a great way to put it Joan. So, Bill, are people freaked out on the ground that their votes aren’t going to be counted? Does this mean more are going to line up on the third? What are they saying?

BILL WEIR [CNN Correspondent]: If you’re a member of the Wisconsin democratic party today takes on all kinds of urgency; I was talking to the Chair of the Democratic party last night who said due to this quirk of the electoral college if you’re a voter in Wisconsin one of the 3241 people you have more power over the fate of humanity for the rest of existence than most people in history. He’s couching this in terms of everything is on the line right now. But this state has been among the most voter friendly until Republicans put up more restrictions. If you could see in the distance. There’s the state capitol, there’s the folks in the vests that will come outside to your car, take your ballot to help you avoid any sort of covid exposure. Back in April, this state saw chaos there was a statewide election for judges, the Democratic Party civil rights organization said we need more time, can we count if the ballot is postmarked by election day, can we count those afterwards? There was a big fight over that, a number of polling places went down. That was allowed. But this time it has to be received by the board of elections by 8:00 P.M. On election day. And so, the post office, while they say they’re going to do their best, at least in Milwaukee to get the ballots back by midafternoon, not even push it to the end. The post office said today of the 27 states, like Wisconsin, that have this sort of deadline, mail them today. So if you’re among those folks waiting, maybe you’ll stick it in the mail tomorrow, every moment counts, is what the post office is telling us right now. Especially here in Wisconsin. What’s interesting also Jim and poppy are the attitudes towards covid, the Democrats aren’t knocking on doors. They’re doing virtual calls, texts, whereas the Republicans we hear, we have asked to get out and follow them along, are treating this as if it’s any other election. Getting out and canvass.

SCIUTTO: Listen folks, If you had a doubt as to why these stories we’ve been covering matter, delays in the postal service, how many drop boxes are available to people, they matter because it’s about whether your vote will be counted. Joan, to the law, there are other state cases pending, and crucially in other battleground states. How does the Supreme Court ruling in Wisconsin impact those cases? Some of the decisions for the folks in the majority here were very broad in their language.

BISKUPIC: That’s right. Speaking of battleground states there’s a case back from Pennsylvania, there’s one pending from North Carolina. You look at Bill there with the Wisconsin capitol of Madison, that’s going to be the scene of so much chaos as he says, but right here in Washington D.C., at the Supreme Court building is going to be another scene right up through election night and probably after where, Jim, the Justices will be deciding what votes count and who’s rules in in the state count, rules set by a state legislature, by a state court, rules set by a federal judge intervening. To the very last question probably not given what they said about Wisconsin. So I think the Supreme Court is going to be right in the thick of things this election season. Jim? Poppy?

SCIUTTO: 20 years ago, right, we saw it then. When you have the Justices deciding in large party in line with the party of the President that appointed them, the questions are amazing.

BISKUPIC: Well can I just say one last thing? Three of our current justices worked on the case of Bush V. Gore. New Justice Barrett, Justice Kavanagh and Chief Justice Roberts they all worked for George W. Bush. They know what can happen.

WEIR: And Jim and poppy, the second state behind Florida on the closest vote, Wisconsin.

HARLOW: Thank you both. This has been the most illuminating segment of the show for sure. Thank you, Joan, thank you Bill.