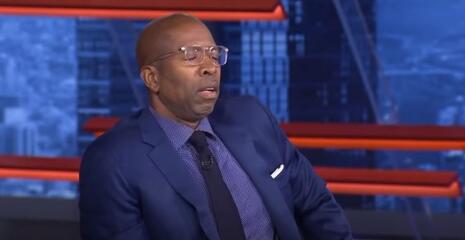 Sports Illustrated on Thursday raved over the reactions of pro basketball analysts Kenny Smith and Chris Webber to the NBA’s Jacob Blake-inspired boycotts resulting in Wednesday’s cancellation of three playoff games. Afterwards, Outkick’s Jason Whitlock said these former pro players have been duped by a hollow Nike “Just Do It” mentality and social justice bubble groupthink.

Jimmy Traina, of Sports Illustrated, wrote that Smith and Webber “stand out during surreal, memorable day in sports.”

What did Smith (appearing in above photo) do? He walked off the set of TNT’s Inside the NBA program, after saying, “I think the biggest thing now — as a black man and a former player — I think it’s best for me to not be here tonight.”

As Traina explains it, “[A] clearly shaken Kenny Smith got up and left the set in the middle of the program to show solidarity with the players who decided not to take the court on Wednesday.

“The symbolism of Smith’s empty seat for the rest of the show was powerful.”

How bout Webber? He stayed on set with TNT and issued an exaggerated statement about the whole world focusing attention on the players who didn’t play ball:

“I’m very proud of the players. I don’t know the next steps. Don’t really care what the next steps are because the first steps are to garner attention. And they have everybody’s attention around the world right now.”

Webber also said protesters need plans and strategies, but then applauded young people for leading the way — a directionless way with no expressed strategy.

Smith’s walk-off accomplishes nothing, Whitlock countered. And even though Webber brought up the need for strategy, he applauded young people who haven’t demonstrated any semblance of one.

On an unscheduled episode of his “Fearless” YouTube show, Whitlock blasted boycotting athletes for having no plan. He said he thinks Webber has good intentions, but is a victim of an NBA bubble thought process. It’s an echo chamber where basketball players don’t engage with people who disagree with them. It’s a “toxic environment” where all the people agree with each other. Outside thoughts can’t get in and players and coaches are jumping to “incredibly bad conclusions” and painting a negative picture of America.

Whitlock expanded on hollow actions by pro athletes in his Outkick blog commentary by suggesting this thinking originates with Nike’s hollow “Just Do It” slogan:

“The Just do it slogan was inspired by the last words of confessed double-murderer Gary Gilmore, who responded ‘let’s do it’ when seated before a firing squad in 1977. …

“Just say it. Anything. It doesn’t have to make sense. You can inadvertently compare the killing of Martin Luther King to the shooting of Jacob Blake and the death of George Floyd. Just do it. The truth doesn’t matter. Strategy doesn’t matter.”

For the second day in a row, there were no NBA games played Thursday. The NHL canceled games for Thursday and Friday. At least five Major League Baseball night games were cancelled Thursday, but day games were played, angering St. Louis Cardinals pitcher Jack Flaherty, who posted, then deleted, a sour tweet saying: “WE ARE THE ONLY SPORT PLAYING TODAY LET THAT SINK IN.”

Reality has sunk in for many sports fans who are weary, weary, weary of athletes performing social justice antics on the job.