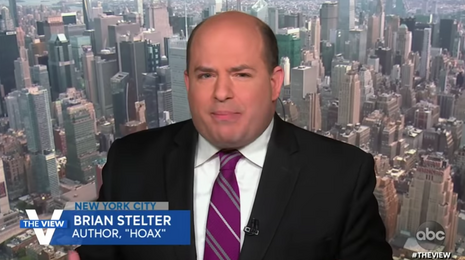 CNN’s Reliable Sources host Brian Stelter has a book out, stuffed with anonymous sources, ranting about Fox News and President Trump. As you can tell by the title, it’s just the sort of even-handed account one could expect from an objective host of a media show at CNN: HOAX — Donald Trump, Fox News and the Dangerous Distortion of Truth.

Stelter was guest on a friendly New York Times book review podcast hosted by Pamela Paul, in which Stelter revealed that his colleagues look at Fox anchors Chris Wallace and Bret Baier with “disgust” for being “complicit” in the lies of their network.

Stelter offered accidental insight into two-faced reporters and news anchors, starting around the 17-minute mark (The show was taped September 3, after it was announced that Fox News’ Chris Wallace would moderate the first Trump-Biden debate):

But I’ll say this, Pamela, I feel like five years ago versus today, there’s a lot, a lot more criticism of people like Chris Wallace and Bret Baier within the journalism community, within the television news world. This tight-knit, sometimes incestuous world where people hug each other in the front and stab each other in the back, right?

There’s a lot more resentment and even disgust with the fact there are these news anchors at Fox who, in the eyes of their friends, are complicit. I know that’s a tough word but it’s true. There’s a sense of complicity, that if you’re working in the same channel as these propagandists then you are a part of the problem. And like I said, if anybody is able to be the exception to that rule it is Chris Wallace. But it is still very much a topic of conversation in the Trump years.

When Paul raised a hypothetical about whether Stelter would take an anchor job at Fox if offered, he said he found that unlikely, but in his response made a hero out of a former Fox News host Shepard Smith, who seems to be an obvious source for this book:

I would get to the answer yes by saying if you can carve out own staff and own hour and be insulated from the pressures of the network and not have to worry about viewers screaming at you for fact-checking Trump, and not to worry about the ratings declining because you called out Trump’s serial lying and hypocrisy. Then yes, right, then yes, you would take that job, because you could speak truth to an audience that needs to hear it. That’s what Shep Smith was trying to do. But Shep couldn’t take it anymore, and Shep left.

Stelter, starting around 3:48 in the chat, sounded oddly proud about his reliance on anonymous sources. He’s just a humble messenger:

Stelter trashed Rupert Murdoch’s son Lachlan as a willing patron of right-wing lies at around 9:40 in:

But Lachlan is now running Fox Corporation and he does have more of a conservative bent, he’s friendly with Tucker Carlson, for example. And he seems quite content with what’s airing on Fox News, even when the content is trying to justify violence or promote conspiracy theories or alleged crazy voter fraud. He’s OK with that.

Stelter is so partisan he never bends to the notion that CNN is presently “justifying violence” by going soft on looters and rioters, or “promoting conspiracy theories” about the Russians dominating our elections.

Times reporter David Enrich agreed with Stelter in his Times book review, agreeing with Stelter on the “democracy-decaying role” of Fox News “as a White House propaganda organ,” while pointing out that neither Stelter nor his network is free from partisanship: “Stelter also glosses over the fact that CNN is guilty of its own, Fox-lite version of partisan pandering. Everyone is incentivized to say things that go viral; hyperbole trumps nuance. “

Indeed, Stelter has been lousy at defending his own network.