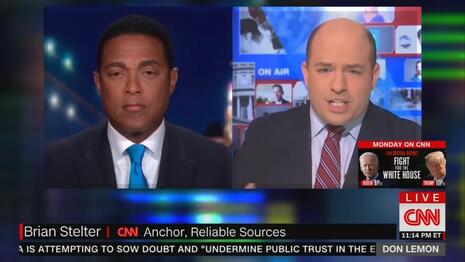 No one was discussing how Goldberg pressed The Atlantic into endorsing Hillary Clinton in 2016, or how Goldberg performed long interviews with President Obama to tout his “Obama Doctrine,” even describing him as “the greatest terrorist hunter in the history of the American presidency.” Or how the co-owners of The Atlantic lavish money on Democrats.

CNN analyst John Harwood argued “A majority of the American people the entire time Donald Trump has been president have said he is dishonest. He has shown that by his career before being president and as president. He lacks credibility. Jeffrey Goldberg is a journalist of high credibility and he’s got four sources in this article.”

CNN historian Douglas Brinkley touted the sources. “No, they’re completely believable that Donald Trump said this. The Atlantic would not be running this article. It’s a fantastic magazine.”

BRIAN STELTER: Normally the denials from the president and his aides would carry some weight, but for three and a half years the White House has squandered its credibility to the point where its words are essentially worthless, and the denials mean very little.

Jeffrey Goldberg is the top editor of The Atlantic. One of the most respected journalists in Washington. He has sources at high levels who have confided in him for years. So this has to be taken seriously as your panel just said, and other outlets are starting to match this. I think, Don, we have to keep, you know, the White House’s credibility in mind when we cover this.

But then Stelter did saying something mildly surprising. He demanded these anonymous sources muster some courage and go on the record with their names:

STELTER: The president’s denying it explicitly, so it’s put up or shut up time. It is September 3rd. The election is in two months. What are these figures doing where they are insisting on anonymity when we know so many people have already left the government. There are so many former Trump officials who are no longer in government. Why aren’t those people coming forward and putting their names to these quotes? I think that’s a big question for the morning, Don. Where are these sources? Who are these sources and will any of them go on the record now?

This is a great question. But it can be extended to all of Brian Stelter’s anonymous sources for his Fox-bashing book Hoax. If they’ve left Fox News for greener pastures, why don’t they show some guts and go on the record? Let’s guess all these people are anonymous for two reasons: (1) they want to destroy their target with minimal personal risk and (2) they don’t want to be questioned on their claim on the facts, or their personal biases.

LEMON: And the reaction, because this is what you do, the reaction, especially from state TV or conservative media will be to attack, attack, attack and destroy and try to impugn people’s reputation or say it’s not credible or this is someone who was upset because they left the White House. You know the game.