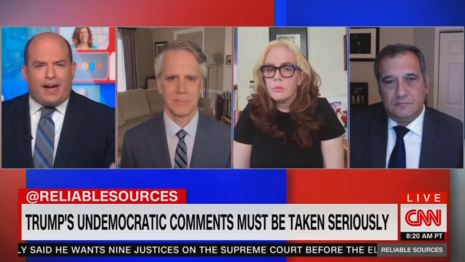 Brian Stelter, host of CNN’s hilariously-named media show Reliable Sources, spent half of his time slot on Sunday spitting out liberal talking points about the upcoming Presidential debate. The CNN host was particularly concerned that Chris Wallace, the first debate’s moderator, might have been ‘tainted’ by working for CNN competitor Fox News, which Stelter referred to as “more propaganda at this point than it is news.”

Stelter’s first guest was Frank Fahrenkopf, the co-chairman of the Commission on Presidential Debates. Almost immediately, he raised concerns about whether moderators in any of the upcoming debates would be permitted to “fact-check” (read: argue with) President Trump. To his dismay, Fahrenkopf poured cold water on that idea:

When we choose moderators we make very clear to them there’s a vast difference between being a moderator in a debate and being a reporter who is interviewing someone.
…
We don’t expect Chris or our other moderators to be fact-checkers. The minute the TV is off, there are going to be plenty of fact-checkers in every newspaper and television station in the world. That is not the main role of our moderators.

Stelter pushed back, arguing that the Commission’s distinction between a journalist and a moderator didn’t account for the fact that Trump is, like, really really bad and stuff:

I think what a lot of liberals would say to that is, what you said is broken in an age when one of the candidates, President Trump, lies every day. How do you explain to them that it’s okay to do it the same old way it’s always been in an environment that’s entirely different?”

Later, Stelter pointed out that Wallace would be devoting a portion of the debate to the issue of “race and violence in our cities,” which the CNN host described as “very Trumpy.” Because who else but Trump would have a problem with months of widespread looting, rioting, and violence?

Later, Stelter invited a panel of journalists to join him in poisoning the well against Wallace: “I think Chris Wallace is an exemplary journalist. But he works for a news outlet that is more propaganda at this point than it is news. So do you view someone like Chris as having a Fox taint?”

The Daily Beast’s Molly Jong-Fast began to answer, but her brain malfunctioned as she attempted to brainstorm on the fly how Wallace might be an unsatisfactory moderator: “The problem I think he’s gonna have is that — he can only, he, you know — he’s from another world where politicians are’t serial — well, they’re — he’s from a different world where people aren’t so…”

Jong-Fast hurriedly ditched the more complicated topic of Wallace and got her train of thought back on track by returning to her comfort zone — complaining about President Trump:  “Trump is completely unbound by the truth. He has no interest in it. He’s an autocrat. I don’t know how you fact-check someone who’s said more than 20,000 lies.”

Throughout this segment, a chyron which read, “How Should Debate Moderators Deal With Trump’s Lies?” ran across the lower third of the screen.

This hypocrisy-filled hour at CNN was sponsored in part by Jaguar. For a full list of CNN’s routine advertisers, check out the MRC’s Conservatives Fight Back page.