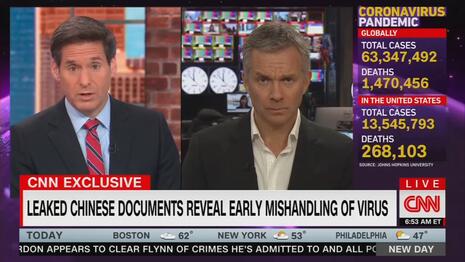 In an admission that was not as shocking as CNN thought, the cable network finally admitted that the Communist government of China was not completely honest about its dangerous mishandling of the COVID-19 pandemic. This was announced via an “exclusive” report written by Nick Paton Walsh which explored how the Chinese government lied to the rest of the world. Rather than admitting their mistake and their false reporting, CNN anchors treated it like a well-established fact during Tuesday Morning’s New Day.

Co-host John Berman openly declared to Walsh: “Well we can’t depend on the Chinese to be transparent which is why it is so important to have your reporting.” So now the Chinese government cannot be trusted? Not when CNN called this same accusation a distraction back in April? How about when they called China’s response “incredible”?

It is good to see the self-proclaimed bastion of news coming to the conclusions that other news organizations came to months ago. But their timing and avoidance of their past false reporting leaves it hollow and suspect.

For months, the partisan network has kept a running tally of cases and deaths regularly on their screen. This has been accompanied by a litany of attacks on the President Trump’s handling of the pandemic, even accusing him of mass murderer.

Given the study done by the MRC showcasing media efforts to steal the 2020 election, it is likely this narrative was another part of that concerted effort.

Now that the election is over, Berman was happy to talk about the truth behind the China accusation:

“CNN has obtained leaked documents from inside China that reveal the missteps and chaos of its early response to the pandemic. The documents are from the Hubei Province, home of the city of Wuhan, where the pandemic is thought to have begun. They show authorities misleading public data on the number of deaths and cases.”

Even with the information that they have now, they still refuse to retract some of their previous statements, like when they blamed Donald Trump for the pandemic.

Walsh admitted that: “China had this real-time as it was seeing the pandemic begin in Hubei and Wuhan and didn’t really share transparently with the world. Things that many other countries faced as well and could possibly have had a head start on it had China been more transparent.”

While it is good to know that CNN is capable of investigating and reporting the news, it would have better if they would apologize for their faulty and partisan reporting.”

This CNN bias was sponsored by Priceline and Vicks. Click on the links to let them know what you think.

A transcript of the December 1st Coverage is included below:

JOHN BERMAN: This morning we have a CNN exclusive! CNN has obtained leaked documents from inside China that reveal the missteps and chaos of its early response to the pandemic. The documents are from the Hubei Province, home of the city of Wuhan, where the pandemic is thought to have begun. They show authorities misleading public data on the number of deaths and cases. They took an average of three weeks to diagnose a new case and much more. CNN’s Nick Paton Walsh joins us with this really remarkable report. Nick.

NICK PATON WALSH [CNN International Security Editor]: John, what’s key about this is its information China had this real-time as it was seeing the pandemic begin in Hubei and Wuhan and didn’t really share transparently with the world. Things that many other countries faced as well and could possibly have had a head start on it had China been more transparent. Here’s what we saw in documents.

WALSH: An unprecedented leak of internal Chinese documents to CNN reveals for the first time what China knew in the opening weeks of the COVID-19 pandemic but did not tell the world. A whistleblower, who said they work inside the Chinese healthcare system, shared the documents with CNN online which show a local chaotic response from the start.

YANZHONG HUANG [Senior Fellow for Global Health, Council on Foreign Relations]: This lack of transparency, sort of also contributed to the crises.

WALSH: CNN has verified them with half a dozen experts, a European security official, and using complex digital forensic analysis looking at the source code. The documents provide a number of key revelations about the providence of Hubei, home of the epicenter Wuhan. Firstly, some of the death tolls were off. The worst day in these reports is February the 17th where they say 196 people who were confirmed cases died, but that day they only announced 93. China was also circulating internally bigger, more detailed totals for new cases in Hubei. For one day in February reporting internally nearly 6,000 new cases. Some diagnosed by tests and others clinically by doctors, and some suspected due to symptoms and contact, but all pretty serious. Yet publically nationwide, China reported nationwide about 2,500 new confirmed cases. The rest were downplayed. In an ongoing tally of unreported cases, that meant patients that doctors had diagnosed as being seriously ill, sounded like they were in doubt. They did later improve the criteria.

DALI YANG [Professor of Political Science, University of Chicago]: If China had been more transparent and also more aggressive with responding, clearly there would have been an impact on how much the virus spread in Wuhan, in Hubei, in China, and perhaps to the rest of the world as well.

WALSH: Shockingly, the documents reveal one possible reason behind the discrepancy in the numbers. A report from early March said it took a staggering 23 days on average from when someone showed COVID-19 symptoms to when they got a confirmed diagnosis. That’s three weeks to officially catch each case.

HUANG: As information seems to be very surprising to because normally it would just take a couple of days.

WALSH: Perhaps the most remarkable revelations concern early December, the moments when COVID-19 first emerged in China. Startlingly, these documents reveal there was an enormous spike in influenza cases in Hubei, right when studies have shown the first known patients were infected with COVID-19. 20 times the number of flu cases compared to the same week the year before. Experts said it could have flooded the hospital system with patients sick from flu like systems. Making it harder to spot the first cases of COVID-19. The documents don’t link the outbreak to coronavirus’ origins directly, but they show flu patients were regularly screened, and many did not have a normal flu virus strain. Leaving open the possibility they were sick with Covid-19.

HUANG: The spike in Wuhan was very unusual [unintelligible] So that would raise a red flag.

SCHAFFNER: It was very, very sizable. It’s clear that the Chinese virologists can make precise diagnosis of influenza. But in retrospect you have to wonder, was there some COVID in there masquerading as influenza.

WALSH: The documents also show the flu outbreak was biggest that first week in December, not in Wuhan, but in two other cities nearby in Hubei. All valuable information in the hunt for where the disease came from. Chinese officials have said the outbreak began here, the Wuhan Seafood market in mid-December. And despite Western accusations that it has limited its cooperation with the WHO investigation into the virus origins. China has insisted that it has been as transparent as possible over the coronavirus.

WALSH: For some time now, in order to shift the blame, some U.S. politicians have constantly used the pandemic and other issues, as a pretext to smear and demonize China. And sow lies and disinformation about China. This will of course, seriously mislead citizens of the United States and some other Westerns countries about the truth of China’s fight against the epidemic.

WALSH: China’s foreign ministry and health officials in Beijing and Wuhan have not responded to our requests for comment. This disease has killed nearly 1.5 million people, about a fifth of known deaths in America. These documents are rare, clear and open window into what China knew all along. Trying to appear in control, while a local outbreak turned into a global pandemic.

[Cuts back to live feed]

BERMAN: Nick Payton Walsh, joins us again. Nick, just terrific reporting, put this into perspective for all of us, why is this so important.

WALSH: Let’s face it, most people suspected that China probably hadn’t given us the full picture. But, as time went by, the authoritarian system China is governed by essentially brushed aside all the debate you saw in Democracies about masks or no masks, they put in a serious clamp down and efficient measures and said, look, we got control of this. Our system is the best. What these documents show is that internally while they were initially dealing with this, they made mistakes, miscounted, misdiagnosed, misinformed the world about what they were really seeing. For lots of reasons, possibly because of chaos, possibly involving their own political motivations, but they were not transparent and subsequently the rest of the world didn’t learn from its experience as much as it could have. At the same time John, the World Health Organization right now, is trying to get an investigation under way in Wuhan as to how the virus began, its origins. That is vital for us to know because unless we know where it came from, we cannot stop it from happening again. It could occur possibly worse in our lifetimes. So this is a vital source of information that should be shared more widely so scientists could pour over it and we should have perhaps more.

BERMAN: Well we can’t depend on the Chinese to be transparent which is why it is so important to have your reporting.