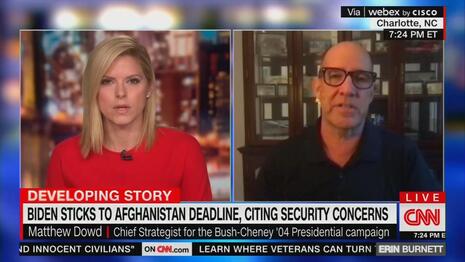 President Joe Biden’s withdrawal from Afghanistan was so epically disastrous that even most of his allies at the liberal broadcast and cable networks couldn’t spin it…but some actually tried to.

Some, like CNN’s Fareed Zakaria and former ABC pundit Matthew Dowd brazenly called Biden’s decision “brave.” Others like MSNBC’s Joe Scarborough claimed that in time, Americans will come to “credit” Biden for the pullout. MSNBC’s Malcolm Nance callously told Americans to “Deal With It.” And the likes of MSNBC host Joy Reid and actress Rosanna Arquette exploited the tragedy to compare the Taliban to the GOP.

The following are some of the most shameless attempts by lib journos to turn one of the worst moments in American foreign policy history into a political win for Biden.

“I actually have lauded the President from the very beginning about Afghanistan. He was dealt a horrible situation. And as of today, he’s done an extremely good job in the situation….What he’s done over the course of the last week, should be congratulated on the way this was done….I think the President has done unbelievable yeoman’s work.”
— Former ABC News chief political analyst Matthew Dowd on CNN’s Erin Burnett OutFront, August 24.

“I think he [President Joe Biden] took a very tough decision, a brave decision, and maybe at the end of the day there is no elegant way to lose a war.”
— CNN host Fareed Zakaria on CNN’s The Lead with Jake Tapper, August 16.

Host Willie Geist: “What did you think as you heard the President yesterday? He was asked repeatedly about his decision to get out, about setting this deadline, which some people have said is an artificial deadline, but didn’t waiver off his argument despite the horror of yesterday?”…
MSNBC contributor Mike Barnicle: “I think the same thing that many people in the Pentagon, many people who have had their hands on Afghanistan policy over the 20 years past were thinking. And that is, it was always going to end this way. It was always going to end in chaos and death.”
— MSNBC’s Morning Joe, August 27.

Host Joe Scarborough: “I suspect that is not going to be an issue that’s going to be driving any voters in 2022 or very few voters…. More and more people are going to agree with what he did as we move forward.”…
AP White House correspondent Jonathan Lemire: “Eventually Americans will even give him credit for being the U.S. president that was able to finally end the war.”
— MSNBC’s Morning Joe, August 25.

Callous Nance to Those Upset with Deadly Withdrawal: “Deal With It”

“They’re chanting ‘death to America,’ but they seem friendly at the same time. It is utterly bizarre.”
— CNN correspondent Clarissa Ward reporting live on Taliban takeover of Afghanistan, August 16.

Joy Reid Has More Rage for GOP Than Taliban

“The only reason that we know who the Taliban are is because they decided to back a terrorist group, al-Qaeda, right? They’re an extreme, right-wing organization that perverts….the Islamic faith for power….Here in the United States, our extremists have a political party backing them.”
— Host Joy Reid on MSNBC’s The ReidOut, August 19.

“This is the real-life Handmaid’s Tale. A true cautionary tale for the U.S., which has our own far religious right dreaming of a theocracy that would impose a particular brand of Christianity, drive women from the workforce and solely into childbirth, and control all politics.”
— August 14 tweet by MSNBC host Joy Reid. Reid was commenting on a BBC tweet about Taliban turning women away from universities and workplaces.

“Vast Majority of Americans” Agree With Biden on His Afghanistan Policy

“The Taliban extremists are here in America just with a different name the GOP right wing extremists who support destroying democracy are the Terrorists in America and will continue to terrorize America until they are stopped and pay for their crimes against Americans Jan 6th.”
— August 15 tweet by actress Rosanna Arquette.