It’s bad enough that CNN International anchor Christiane Amanpour viciously tried on Thursday night to compare President Trump not conceding the election to Kristallnacht and the eventual Nazi genocide of the Jews. It’s worse that this mudslinging was replayed on taxpayer-funded PBS, where “viewers like us” — and some super-wealthy Jewish donors, including Bernard Schwartz, who was a massive Democrat donor in the 1990s — were announced as her sponsors.

CHRISTIANE AMANPOUR: This week, 82 years ago, Kristallnacht happened. It was the Nazis’ warning shot across the bow of our human civilization that led to genocide against a whole identity. And, in that tower of burning books, it led to an attack on fact, knowledge, history and truth.

After four years of a modern-day assault on those same values by Donald Trump, the Biden/Harris team pledges a return to norms, including the truth. And, every day, Joe Biden makes presidential announcements about good governance and the health and security of the American people, while the great brooding figure of his defeated opponent rages, conducting purges of perceived enemies and preventing a transition.

No democracy can survive unless the majority of people at least accept the same set of facts. And so here are some. According to a Reuters poll, nearly 80 percent of the American people, Republicans and Democrats, accept the result of the 2020 election. Yes, so far, Trump has won 72 million votes to Biden’s 77 million, but, no, there have been no serious protests on the streets contesting the result, while secretaries of state around the nation, Republican and Democrat, say there has been no meaningful fraud, and they have found nothing that would overturn the result.

Now let’s poll the American people and ask them how many of them believe that asking for a recount and the Holocaust and comparable historical events.

Amanpour then just turned to Sen. Chris Coons for an interview. Speaking of violent Holocaust deniers, Amanpour asked Coons about how Biden will “reverse some of the ruptures that President Trump has made abroad. Let’s just take the Iran nuclear deal for a start. Obviously, for some, it’s controversial. Nonetheless, by and large, people around the world have thought that it at least lowered the temperature on a major security issue.”

PS: Mark Levin tweeted that Amanpour should be fired: 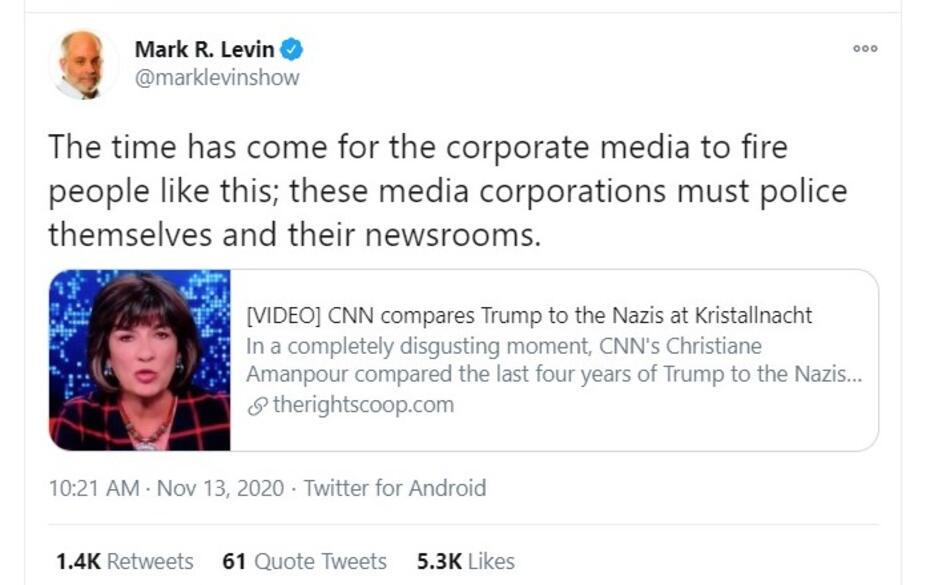