Lily Palfrey knows her father’s job is to look after his soldiers, and she wanted to help him do just that.

A year before her father deployed, Lily began planning to send care packages to each of the soldiers in her father’s company as part of a 4-H project (4-H is a youth development organization.) 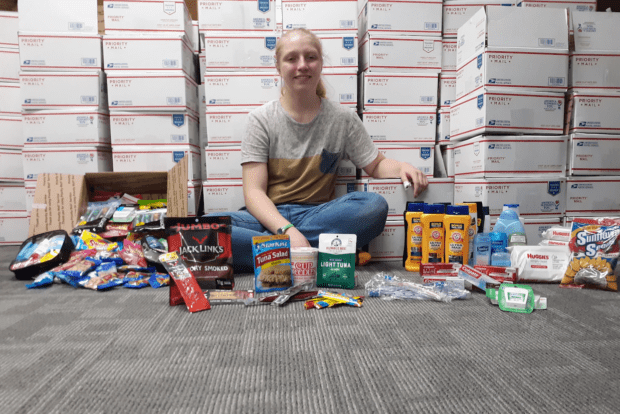 She had to work with various people and organizations to get enough to send to all the soldiers. When she found out some items couldn’t be shipped, she donated them to veteran homeless shelters in her local area.

When the COVID-19 pandemic arose, Lily was forced to create a COVID-19 mitigation plan. This plan included a virtual presentation, which included videos from other military kids talking about what it was like to have a parent deployed.

Soldiers received the packages at their various locations in the 28th Expeditionary Combat Aviation Brigade’s area of operations in the Middle East in October.

HHC mailroom clerks were awarded challenge coins for their efforts sorting and distributing all the packages to Headquarters and Headquarters Company soldiers.