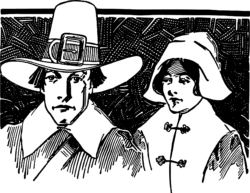 This article might make it easier to enjoy your holiday, even as we navigate these current terrible times. It might even help you to understand better what’s going on all around us.

To begin, I’m going to give you two stories of the origin of Thanksgiving. Choose whichever one you want.

STORY ONE:  In 1620, a small ship called the Mayflower landed on Plymouth Rock in Massachusetts. Pilgrims from England were coming to America to establish a new colony where religious freedom could be practiced. The pilgrims struggled, but with the help of new-found Native American friends, they persevered and, following a successful harvest, had enough food stored to get through a difficult winter. To celebrate and give thanks for the bounty, the pilgrims invited their new friends to a feast, sharing food and good company.

STORY TWO: In 1620, a small ship called the Mayflower arrived in Massachusetts, off-loading it’s human cargo of awful European settlers who claimed the land for themselves. Finding Native inhabitants, these interlopers killed as many of them as they could and, to stave off starvation during a harsh and unforgiving winter, they ate the Natives with fava beans and a nice Chianti. Later, because they were evil white people, they infected the natives with smallpox just for jollies. Well, that, and to steal more of their land.

Pick one or the other story now. Go ahead – choose. It really doesn’t matter which one you choose in terms of “truth”, because neither story is true. For this exercise, however, you must choose which one you’d like to carry with you into today’s celebration.

Wait, what? You want the REAL story?

Welllll…that’s going to be a problem. You see, the “real” story is a bit complicated. It actually goes back CENTURIES before the Mayflower landed. It involves many Native tribes, who weren’t actually “native” at all, killing each other (and sometimes breaking out the beans and wine) while stealing the other tribes’ land. Then some white folk came along and did a few less than desirable things in the process of creating a nation, including killing some of the “natives”, taking “their” land, enslaving dark-skinned people from another continent (whose ancestors had enslaved light-skinned people centuries before), and taking what they wanted at the tip of a sword or barrel of a gun. There was some lying and backstabbing, poisoning and scalping, and general use of force that wasn’t very nice and, ultimately, “victory” to the people who came out on top in the violent struggle which, for the most part, turned out to be the Europeans.

This, by the way, is the entire history of mankind in every part of the world, since the beginning of time. Skin tones change, points of origin change, the land mass changes, and who is victorious from one minute to the next changes, but in general the story isn’t much different from one generation to the next, one people to the next, one continent to the next. The truth is that human beings are pretty shitty to one another, and generally always have been. We’ve tried to be better – we really have. In fact, a hundred and fifty years after the Mayflower landed (that part really did happen), some pretty wise folks crafted the beginnings of a government that tried hard to eliminate a lot of these human failings. Properly followed, that start – punctuated by the Constitution of the United States of America – would (and for the most part has) ended much of the worst of it.

The nation created by those wise souls wasn’t perfect. Not then, not now. Neither were the wise souls themselves. But they saw a far better mankind, a far better civilization, if only we could all agree that certain things were true with regard to each of us individually and how we behaved collectively toward and in concert with one another. They codified those things as best they could, and what emerged (imperfect as it was and is) stands now as the greatest nation in the history of man, and a beacon for the rest of the world (which much of the world now follows).

Now about that choice of stories, do you wish to keep the first one, which isn’t exactly true but sure is a lot more pleasant and gives us both kindness and hope to build upon? Or do you prefer to keep the second one, which also isn’t exactly true but strips us of all the good that’s come from the struggle to achieve a better humanity, including the Constitution’s perfection?

Before you make that decision, consider the whole concept of “thanksgiving” to begin with. We have before us a national holiday that is dedicated to being thankful for all we have. We feast. We share time with family. We watch parades and football. Some of us pray with gratitude for what’s been provided to us, and with hope for a better future, a better humanity, moving forward.

I frankly don’t care if pilgrims never invited Indians to eat turkey. I don’t care if white people from Europe “stole” land from “natives”, any more than I care who the natives stole the land from in the beginning. I don’t care if the people aboard the Mayflower came here to escape religious persecution, or if they just were looking for a grand adventure. I don’t care that Thomas Jefferson owned slaves. I don’t care that evil people in government poisoned blankets with smallpox, any more than I care that awful “warriors” scalped white people including innocent women and children. There is some truth, and some lie, to all of these things. We can’t really know the difference, any more than we can know all of the circumstances that surrounded these triumphs and tragedies. Even if we knew every last detail, however, we can’t change one bit of it.

There is evil in life, and there always has been. We fight the evil in our time, to the extent we can, with the knowledge of it that we have. We cannot fight the evil of the past, and while it’s always beneficial to know as much about that evil as we can so that we can avoid it in the future, at some point we have to recognize two very important points. The first is that history is both ugly and flawed, and the second is that evil isn’t all that exists. In other words, it isn’t just the ugly that we have to call attention to and pay attention to, because there’s also good which, if left to those who only want to magnify the evil, disappears from our history. Is that a world any of us want to live in?

Pilgrims didn’t invite Native Americans to sit down and feast with them, but when the Natives showed up the banquet was indeed on. Do we energize the lack of invitation, or the fact that disparate people who throughout time would be at odds broke bread together in celebration and thanks? Europeans didn’t “steal” land; they acquired it over time just as those who were here “first” acquired it from the people who were here “first” before them. Do we lament the supposed theft and base our entire national psyche on that perceived injustice, or do we give thanks for and celebrate the great nation that was born as a result?

I am in no way suggesting that we should gloss over the wrongs that have occurred in our collective past, while promoting only the good. What I’m saying is that we can acknowledge the bad, learning from it when we can, but ultimately we should elevate and celebrate the good. Is it so bad to allow our legends to reinforce goodness? Have we not all collectively risen as a result of good, in spite of the bad? Can’t we choose to find and revere the good in people, situations, stories, rather than focus on the failings?

We see the world around us right now crumbling, and for as awful as it is to consider, even America is teetering on the edge of that abyss. Without a doubt, evil is afoot in every crevice of society, both here and abroad. Times seem darker than they have at any point in my lifetime, and if I choose to succumb entirely to the melancholy of it all

I’ll have no reason to get out of bed in the morning, let alone to fight it.

I celebrate the glories of America (which hasn’t been “free” for a very long time, if it ever even was) and the stories of America (which may not have happened exactly the way Charlie Brown presents them to us) through a lens that magnifies the good so that I don’t forget that good exists because, frankly, I’m reminded every day of the evil that man is capable of and carries forth regularly. The truth of that first Thanksgiving lays somewhere between the two stories I started with, but I’m going to choose the nicer of the versions, because I can’t change the past and I don’t wish to tarnish the future with the negativity of the crap people do to each other. Sue me.

Which brings us around to the celebration of Thanksgiving as a holiday. Abraham Lincoln gave us a day of Thanksgiving, the last Thursday in November, while America was in the throes of the Civil War. It was a day to help bring us together as a nation in remembrance of good and with gratitude for what we had. Pilgrims weren’t even mentioned. In fact it was John Kennedy who found a way to tie the two together in a speech given during his own Thanksgiving celebration, a hundred years later. The Thanksgiving story as we know it never really happened, at least not as we’ve always thought it did.

And frankly, I don’t give a crap. It’s the story I’m sticking to, because it’s a vision of good in a world that reeks of bad.

Image by OpenClipart-Vectors from Pixabay