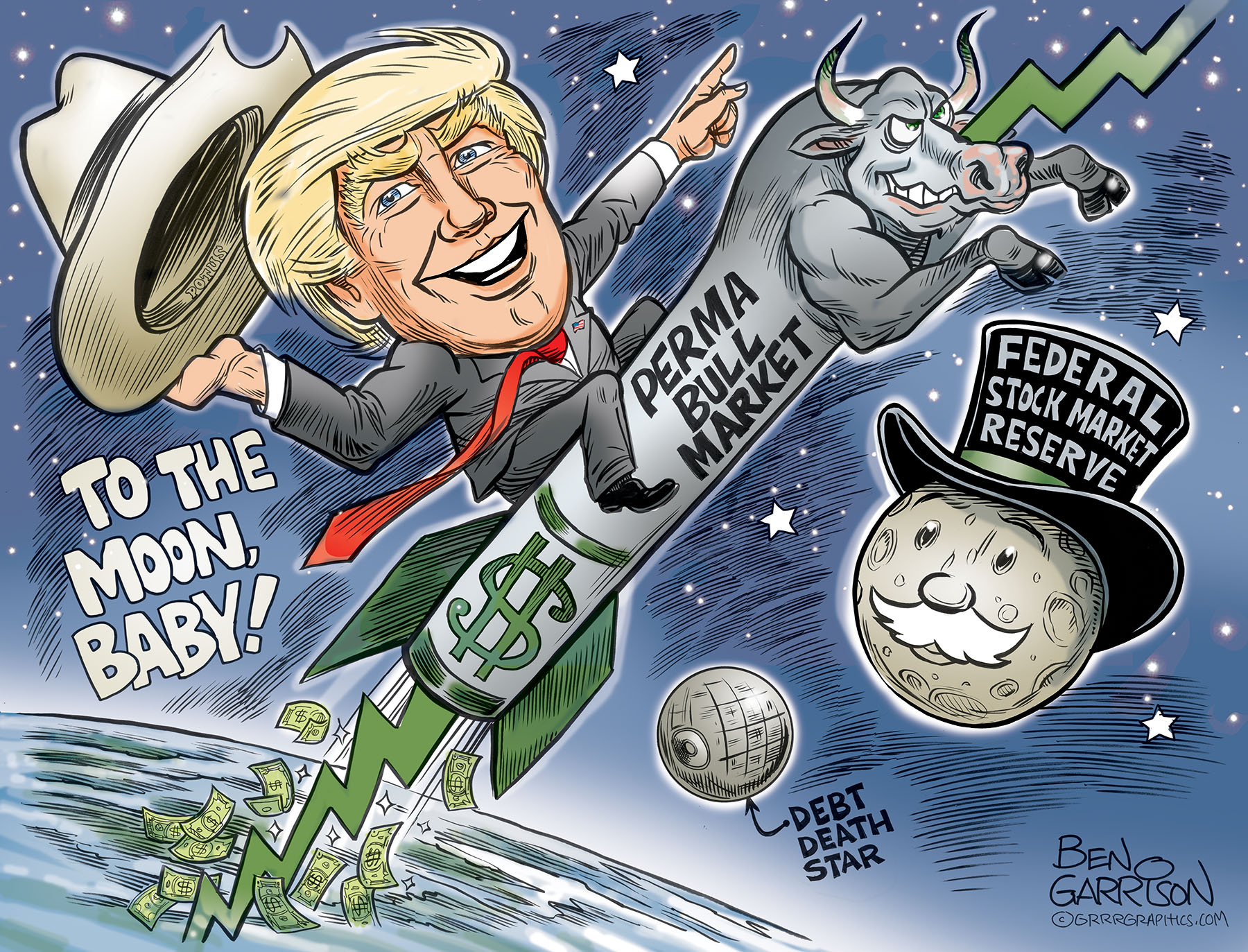 Anyone who has seen my cartoons knows I support Trump and his re-election. Biden and Kamala would be a disaster for our country. However, I don’t always agree with the president and before we at GrrrGraphics begin producing a Republican Convention cartoon extravaganza, I thought I would temper it with a bit of criticism.

When Trump brags about the stock market going up and making new highs, I cringe. This is not a healthy stock market based on logic, earnings, or a healthy economy. The market has disconnected itself from capitalism and a true value discovery.

What’s really going is a Federal Reserve takeover of our economy. What we’re seeing is a monumental transfer of wealth from the have nots to the haves. It widens the gap between a few money lords and the vast majority of We, The Serfs. Before you say I sound like Bernie Sanders, this isn’t about class warfare, but it is about destroying what’s left of the middle class. It makes it easier for the illuminati and their point man, George Soros, to usher in their tyrannical socialism.

Leaving no good crisis unused, they’re leveraging the ‘plannedemic’ to help globalist corporations get fabulously wealthier and more powerful while the smaller businesses—the Mom and Pop middle class–are crushed. The Fed has poured in nearly $7 trillion into the stock market this year alone–and while it does help out those with 401ks as Trump says, it mostly helps those at the very top of the pyramid the most. Amazon’s Bezos has raked in countless billions of dollars has his company makes new highs. Apple has a two trillion dollar market cap. Tesla has the largest market cap of any auto company, even if their sales don’t justify it. Elon Musk is favored by the “Green New Deal” illuminati, so he gets propped up while competition gets stamped out.

The Federal Reserve, in a fascistic manner, gets to funnel money toward favored companies while revenue for small businesses is down 30 percent. The Fed creates money from thin air and keep ‘their’ stock market bull moving up, thus making the fabulously wealthy central bankers and the handful of powerful families at the top who own the Fed gets fabulously wealthier and more powerful. The top 1 percent already owns nearly 40 percent of the stock market. The rest of us get to pay for the bubble through inflation. Have you noticed how expensive food has become? Yet we don’t get to share in the money-glutted stock market. Has the Fed sent you a share of Amazon or Apple? Of course not. Yet we pay for their robbery through the massive creation of debt. It’s always the same—the powerful screw over the powerless. We’ve already passed the point of no return with the national debt (now nearing $27 trillion) and every few seconds another $100,000 is added to it.

Many Americans can’t afford to participate in the stock market bubble. They’re too busy worrying about how to pay their rent while the rich are getting incredibly richer by ill-gotten means. This is something Trump should consider before he brags about new stock market highs.