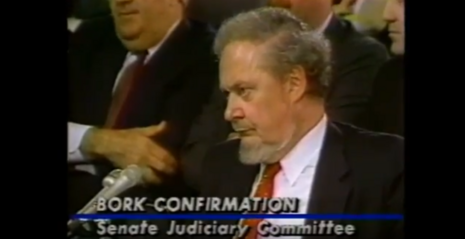 The official White House briefing book on the record of Supreme Court nominee Robert Bork was a wonder to behold.

As I leafed through the thick black binder in 1987 in my capacity as an Associate White House Political Director, I realized it was extraordinarily thorough. There in black and white was every opinion Judge Bork had rendered as a federal judge. There were his speeches, his articles from a wide range of legal and other publications. And of course, there was a detailed biography of the man who was widely recognized as a genuine legal scholar.

He had been a star law student at the University of Chicago, and then joined the prestigious Kirkland and Ellis law firm. Then it was on to teach at Yale Law School, an appointment as Solicitor General of the United States under two presidents (Nixon and Ford) and finally on to the U.S. Court of Appeals for the D.C. Circuit.

But suddenly the realization dawned. The briefing book, prepared for all of my Reagan White House colleagues involved in the confirmation process, was worthless.

Because the unfolding debate over the Bork nomination was like nothing we had ever seen before. And most assuredly we were already well past the point of an eye-glazing and lawyerly discussion of the finer points of constitutional law, which, up until this moment in American history, had been the standard for the very dry and unremarkable process of confirming a Supreme Court justice and, for that matter, every other nominee for the lower federal courts. 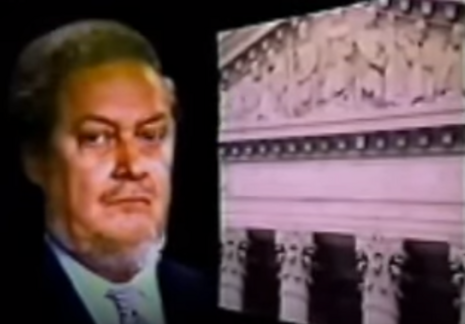 Instead we were dealing with Gregory Peck. For those who came in late, Gregory Peck was one of the most famous movie actors of the day, a fixture in American culture for decades. Well aside from his movie star good looks, Peck had a very distinct, and very famous, deep baritone voice. Simply to hear the voice with no picture was enough to tell Americans exactly who was speaking. And oh yes, he was a devout political liberal.

Which is without doubt why he was selected by the liberal special interest group People for the American Way. PAW was the creation of, yes, a television producer – Norman Lear, the creator of the hit show All in the Family and others. To say the least, Lear was media savvy. So he settled on actor Peck, knowing Peck was an American moviegoer favorite – a man of trust. So Peck narrated what was a startling “first” in the confirmation process of a Supreme Court nominee. That “first” was a searing television commercial attacking Robert Bork.

Preserved today on You Tube, you can see it here.

“Robert Bork’s America is a land in which women would be forced into back-alley abortions, blacks would sit at segregated lunch counters, rogue police could break down citizens’ doors in midnight raids, schoolchildren could not be taught about evolution, writers and artists could be censored at the whim of the Government, and the doors of the Federal courts would be shut on the fingers of millions of citizens.”

And like clockwork, Kennedy’s attack was played and replayed by the liberal media.

Indeed the smearing itself took on the nominee’s last name as a descriptive of the new process: borking. When the liberal Justice Thurgood Marshall, the first black on the Supreme Court, retired a few years later, the demand from the left went up instantly that this was the “black seat” on the Court. President George H. W. Bush complied – nominating conservative Judge Clarence Thomas.

A horrified feminist leader spoke to the far-left National Organization for Women and was quoted as saying:

In the years after the borking of Robert Bork, borking was used on one Republican judicial nominee after another, metastasizing downward from GOP Supreme Court nominees to GOP Circuit and District Court nominees. From Clarence Thomas to Brett Kavanaugh at the Supreme Court level, the borking spread to less well-known lower court nominees like the Third Circuit’s Brooks Smith, the Fifth Circuit’s Charles Pickering and Priscilla Owen, the Eleventh Circuit’s William Pryor and the DC Circuit’s Janice Rogers Brown.

By now, any potential judicial nominee of a Republican president realizes that if they get the presidential nod, all hell will break loose around them in the media.

As this is written, President Trump is said to be considering 7th Circuit Judge Amy Coney Barrett as the nominee to fill the Ginsburg seat. (See NewsBusters for more on her.) And without yet even being nominated the borking of Amy Barrett has begun. Here are but a sample of the headlines already out there about the conservative Judge who is seen as both a Scalia-style conservative and a devout Catholic.

There’s more out there like this — and this is before Barrett has even been nominated, if she’s nominated at all.

All of this said, there is one thing Barrett or any other Trump nominee will have going for her, just as Kavanaugh had it. When Robert Bork was nominated in 1987, “conservative media” didn’t exist outside of a couple publications like William F. Buckley’s National Review and R. Emmett Tyrrell’s The American Spectator.

To say the least, the media landscape has changed from the days 33 years ago when the media borked Bork. The very site you are now reading, the Media Research Center’s NewsBusters, covers the liberal media itself. It is well out there – along with Rush Limbaugh, Sean Hannity, Mark Levin, Fox News, Newsmax TV, One America News and countless conservative Internet sites not to mention local talk radio shows. Had they existed in 1987, Judge Bork may well have been confirmed.

But they exist now, and whomever President Trump nominates to the Supreme Court, one can say with certainty that as the borking by the liberal media and the Democrats begins, conservative media will be at the barricades.

And saints be praised for that.