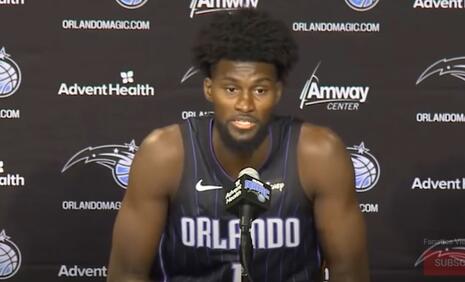 There is no point in unvaccinated NBA players making the road trip to Toronto. That Canadian city can sentence them to jail time and fine them $750,000 for leaving their hotel, according to a report in The Athletic. Other NBA cities will prevent such players from playing in games and also from attending practices. Yes, it’s one big, tangled web of freedom-dousing nonsense gripping the league.

An individual violating Canada’s Quarantine Act can be imprisoned for up to six months in prison and/or pay the monstrous fine, according to The Athletic’s Shams Charania.  He reports unvaccinated NBA players would be directly at risk of this harsh punishment during road trips to Toronto.

The NBA’s health and safety protocols for the 2021-22 season require players to pass a PCR test before traveling to Toronto, regardless of vaccination status. The season begins Oct. 19.

Brooklyn guard Kyrie Irving, Washington’s Bradley Beal and Orlando’s Jonathan Isaac are some of the notable NBA players who are resisting vaccinations and who would be vulnerable to Canada’s stiff punishment for not staying cooped up in their hotel room.

Some 95 percent of NBA players are vaccinated, though the NBA players’ union previously rejected a league-wide vaccine mandate. The lack of a league mandate offers no cover in certain league cities. While in Toronto, the vaccination holdouts would only be allowed to leave their hotel rooms for team activities. Other NBA cities would severely restrict unvaccinated players’ ability to participate in team practices as well.

These players are not eligible to play in Oakland’s Oracle Arena, New York’s Big Apple MSG or Brooklyn’s Barclays Center. These cities have established vaccine mandates in place for indoor activities. Golden State player Andrew Wiggins ended a long vaccination holdout recently rather than have to sit out all of the team’s 41 home games this season.

Another player who is not vaccinated is Isaac (in the above photo), who is skeptical about the vaccine and uncomfortable with the shots. He told Fox News’s Shannon Bream he is not anti-vax on principle.

“I believe that what I’m saying is rational,” Isaac said on Fox. “And it’s free…We live in the land of the free and the home of the brave and we have the opportunity and the platform to say what it is that we feel that is right. I’m taking that right to do so, not just for me, but for all of those people who feel like they don’t have a voice.”

Irving calls the limitations “oppressive.” The city of Toronto calls them “criminal.” Brooklyn, the Bay Area and New York haven’t yet gotten the memo about the land of the free.