CBS Sunday Morning exploited the coronavirus to whine about income inequality and how terrible capitalism is. It also speculated whether the virus itself was presenting an opportunity to change the economic system. 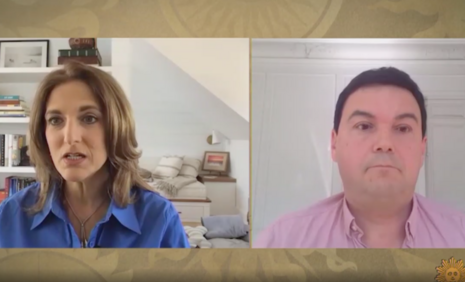 Three of the four commentators Schlesinger used to push the income inequality line were ardent leftists. The fourth, American Enterprise Institute adjunct fellow Edward Conrad, said “capitalism is just trying to maximize, optimize — grow everything as fast as it possibly can. That’s how people get rich.”

But one of the leftist commentators, economist Thomas Piketty, actually said with impunity that “crises like pandemics are sometimes necessary” to “deliver big political change or ideological change.” In other words, the current pandemic may be “necessary” to change capitalism. Piketty has had some of his work financed by the Soros-funded Institute for New Economic Thinking, according to Time magazine.

Schlesinger asked an insane question to Piketty at one point in the segment: “Do you believe that the pandemic presents an opportunity here?” Piketty then gave the cringe response: “What we see from history is that crises like pandemics are sometimes necessary, unfortunately in a way, to deliver big political change or ideological change.” Piketty then hedged himself by saying, “but we should not just count on crises to get very bad so that after crises, you know, things will get better. Because in practice, crises can also deliver political monsters as we’ve seen, after World War I in Europe.”

Sounds eerily familiar to when George Soros told an Italian newspaper that the pandemic was providing a “revolutionary moment.”

No criticism of Piketty’s extremist statement that “pandemics are sometimes necessary” was given by Schlesinger.

Earlier in the segment, Schlesinger promoted a new documentary based on Piketty’s controversial book “Capital in the Twenty-First Century.” Schlesinger drooled that Piketty had “surveyed centuries of economic upheaval,” before shifting to her interview with Piketty.

Piketty exploited the coronavirus to attack capitalism: “The pandemic illustrates, you know, I think, the need to change the economic system and to get in the direction of a more equal and more equitable and more sustainable model of economic development.” Schlesinger never mentioned anything about how Piketty’s work on income inequality has been repeatedly chastised for flawed arguments.

The Information Technology & Innovation Foundation released a study in 2018 headlined: “Sensational, But Wrong: How Piketty & Co. Overstate Inequality in America.” According to the study’s summary, Piketty “and his colleagues have been making questionable methodological choices that maximize the jarring effect of their findings.”

In 2014, following the release of Piketty’s book, Financial Times (FT) economics editor Chris Giles and former FT editorial board member Ferdinando Giugliano wrote that “many unexplained data entries and errors in the figures underlying some of [Piketty’s] book’s key charts.” The authors concluded that the flaws were “sufficiently serious to undermine Prof. Piketty’s claim that the share of wealth owned by the richest in society has been rising and ‘the reason why wealth today is not as unequally distributed as in the past is simply that not enough time has passed since 1945.’”

Even liberal billionaire Bill Gates chastised the flaws in Piketty’s book in October, 2014: “For all of Piketty’s data on historical trends, he does not give a full picture of how wealth is created and how it decays.”

Schlesinger didn’t bother mentioning any of this when promoting Piketty and the documentary based on his book.

Contact CBS Sunday Morning at sundays@cbsnews.com and demand they denounce Piketty’s statement that “crises, like pandemics, are sometimes necessary.”