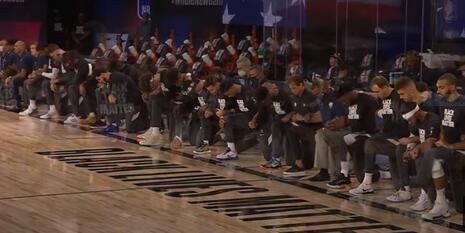 An athlete taking a knee used to be a bold move, but that was 2016. Now as pro sports are beating fans over the head with the “Black Lives Matter” message, kneeling doesn’t go far enough, Sean Gregory writes in a September 10 online Time magazine article defending social justice activism in sports. The games are no longer “some pleasurable distraction in tough times” and it’s no longer acceptable to “use Black Americans as entertainment, but do little to demonstrate that their lives matter,” Gregory says.

Gregory drew these conclusions from several years of social justice activism leading up to the recent sports strikes by teams in the NBA, WNBA, Major League Baseball, Major League Soccer, professional tennis and the NHL. They refused to perform after Jacob Blake was shot and paralyzed by police while resisting arrest, in Kenosha, Wisconsin.

The 2012 death of Trayvon Martin in Florida prompted athletes to get woke and ramp up social justice activism, Gregory explains. He describes Martin as an unarmed Black teen wearing a hoodie who was “gunned down by a neighborhood watchman. “Gunned down” has the sound of someone cowardly shooting a person without cause, but Martin was actually beating the bejabbers out of George Zimmerman.

Martin’s death led LeBron James and his Miami Heat teammates to memorialize the dead teen by posing for photos in hoodies, even though a court cleared Zimmerman of wrongdoing.

Incidents of Blacks dying in altercations with police have prompted much more athlete activism. Despite never-ending black-on-black crime in inner cities, James and other NBA players appeared on the ESPY awards program in 2016 to denounce police violence.

These protests “were powerful conversation starters,” but largely symbolic, the Time writer says. Last year, Kaepernick was given an opportunity to display his skills before all NFL teams, but angrily blew off the opportunity and denounced the NFL. Gregory omits this from his story and concludes Kaepernick was “effectively banished” from the league.

If athletes are protesting, Gregory theorizes “it has become harder than ever to deny systemic racism, though many–including the President–still do. And it’s not just a few players taking a stand. After (George) Floyd’s death, the NBA painted black lives matter on its courts at Walt Disney World” (see photo above).

The more recent police shooting of Blake shook Los Angeles Chargers coach Anthony Lynn, and by the way, he’s one of only three Black head coaches in the NFL. Lynn says if he tried to suppress his players’ social justice activism, “it would hurt their passion and I don’t think they would play the game that they love well.”

Gregory, who glosses right over the plague of inner city crime, ponders what athletes will do when there is more police violence in the future.:

” … If players walked out for Blake, will they do so after future horrific episodes of police violence? And what will it take to bring them back the next time? A new bar for athlete activism has been set. Players have shown the leverage they have and their willingness to use it. Kaepernick and others who joined him in protest couldn’t effect change on their own. But together athletes have the opportunity to demand meaningful action.”

Gregory suggests it’s time for activist athletes to advance beyond taking a knee, once viewed as “a bold move. Now it’s not enough,” he says.