Tonight’s Town Hall Challenge: What Fairness Would Look Like In lieu of the now-cancelled presidential debate, ABC and NBC tonight will host town hall gatherings with President Trump and former Vice President Joe Biden. If fairness still counts for anything in 2020 (which we know is asking a lot), those networks will treat each candidate similarly to how they treated their rivals in previous town hall sessions. 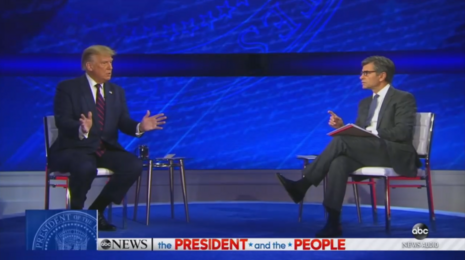 First ABC, which is hosting Joe Biden. ABC held a similar event with President Trump on September 15. If they want to give Biden a similar experience, here’s what they must do:

■ Most of the questions should challenge Biden from the right. With Trump, the 14 voter questions skewed eight-to-one in favor of a liberal/left agenda, with five scored as neutral. Host George Stephanopoulos chimed in with an additional 50 comments/interruptions/questions, 38 of which challenged the President from the left; 12 were neutral, but as expected for a former Clinton official, none came from the right.

If ABC wants to be balanced, here are a couple of potential questions that could help even the playing field: According to the Tax Foundation, Biden’s $3 trillion in proposed tax increases would shave about 1.5 percent off of long-term economic growth. Is it really a good idea to raise taxes with the economy not-yet recovered from the coronavirus lockdowns?

Or: Radicals in the Democratic Party, including your own vice presidential nominee, have talked about packing the Supreme Court with additional members in order to bend the Court in their direction. Is your refusal to provide a clear answer on this important issue evidence that you lack either the desire or will to oppose the far-left in your party, and what would that mean in a Biden administration?

■ Stephanopoulos should paint Biden as a failure. Last month, the ABC host repeatedly painted Trump as failing in his coronavirus response: “What did you get wrong…So you regret nothing?” Regarding Trump’s choice to downplay the severity of the crisis, Stephanopoulos chose a sinister interpretation: “So you think it’s okay to be dishonest?”

To exhibit fairness, Stephanopoulos should tonight ask Biden about his biggest failings in office, such as his self-professed advice to President Obama regarding the raid that killed Osama bin Laden: “Mr. President, my suggestion is, don’t go.” Or how his former colleague, ex-Defense Secretary Robert Gates, wrote in his memoir that Biden has been “wrong on nearly every major foreign policy and national security issue over the past four decades.”

■ ABC should select “undecided” voters who are hostile to Biden. Ethically, they shouldn’t mislead viewers by misrepresenting strong partisans as “undecided” voters, but that’s exactly what they did last month.

Liberals and their media pals loved it when Kutztown University professor Ellesia Blaque shut down the President as she asked about preserving insurance coverage for people with pre-existing medical conditions: “Please stop and let me finish my question, sir.”

They were also tickled when another “undecided” voter, pastor Carl Day (who was identified as voting for Green Party candidate Jill Stein in 2016), lectured Trump: “You’ve coined the phrase, ‘Make America Great Again.’ When has America been great for African-Americans in the ghetto of America? Are you aware of how tone-deaf that comes off to African-American community?”

It’s not clear how ABC selected these voters, but both had made their hostility to the President well-known on social media. According to the Washington Free Beacon, Blaque had called the President “a ‘f—ing moron,’ ‘pathetic,’ ‘pig,’ ‘swine,’ ‘punk ass,’ and ‘LOOSER’ (sic) in a slew of 2019 tweets. She is a self-described ‘liberal Democrat,’ according to her Facebook profile…”

As for Day, the same report found he had “tweeted that he’s ‘never once supported trump and won’t now’ in August, just weeks before the ABC town hall….Day also referred to Trump as a ‘villain,’ called him ‘ridiculously arrogant & obnoxious,’ and said he ‘ain’t no Christian.’”

How predictable. And yet, ABC knows their liberal colleagues won’t bat an eye over this covert liberal activism. 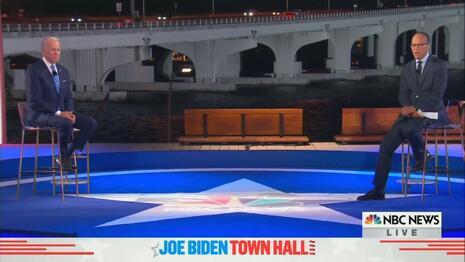 ■ NBC must provide Trump with as friendly a town hall as they provided Biden (which was VERY friendly). NBC’s event with President Trump comes just ten days after its town hall with Biden. To be fair, they would need to stack the “undecided” voters with at least five pro-Trump partisans, since that’s how many Biden voters slipped through their screening process to pitch softballs to the Democratic candidate.

Once again, the Free Beacon and NewsBusters picked up the slack for the our esteemed liberal media and did the work they refused to do.

NBC couldn’t have tried mightily to get an audience of truly undecided voters if they accepted Cassidy Brown as someone wrestling with the choice between Trump and Biden: “Having access to birth control and safe reproductive health care was imperative in making that true for me. So considering the new Supreme Court nomination of Amy Coney Barrett, what are your particular plans to protect women’s reproductive rights in the U.S.?”

One voter told Biden she was worried for him, serving as a question so soft it was an insult to softball questions: “Watching the debate, I noticed that President Trump was bullying you, and I’m worried it knocked you off your game….” So will NBC dig up a voter who similarly empathizes with Trump facing a relentlessly hostile media: “Watching MSNBC, I notice story after story attacking you, and I’m worried….”

Fellow audience member Vanessa Tamariz gave Biden this embarrassing lob to lead off the town hall: “Vice President Biden, I work in Miami as a pediatric nurse and since the beginning of this pandemic the government has been dysfunctional and disorganized in their response….”

Will NBC find voters who would similarly cue up Trump to recite his campaign themes against the Democrats, such as: “Mr. President, I work as a policeman in Portland, where I’ve seen my city’s response to months of protest has been dysfunctional and disorganized, putting our citizens and their property at ongoing risk….”

Rather than unethically stacking the deck with secret partisans, the best way for any sponsor of a town hall-style event to ensure a full and fair discussion is to seek a genuine cross section of voters. And yes, that would include those who have already made up their minds. Failing that, tonight’s NBC moderator and Today co-host Savannah Guthrie should use her own questions to ensure that the President faces an agenda at least as favorable as that Biden faced on October 5.