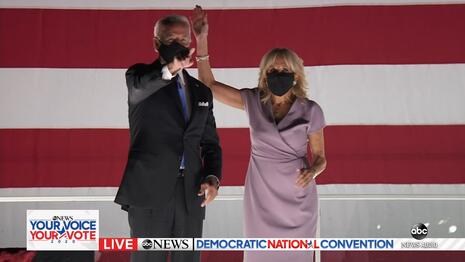 Well they tried. Liberal journalists did their best to put over a really dull Democratic National Convention that felt like the world’s longest Zoom meeting.

Of course, they applauded the Obama speeches as they fondly attempted to relive their Obamagasms from 2008. But this year they were stuck with Joe Biden, and they did their best to feign enthusiasm calling his acceptance speech his “finest hour.”

Does anyone think the networks will be this generous with the GOP convention this week? If you do, then you haven’t been paying attention for the past four years.

Here is a montage by the MRC’s Bill D’Agostino, followed by a top 10 ranking of the most ridiculous plaudits by lefty journos during their coverage of the DNC:

Co-host Alisyn Camerota: “She [Michelle Obama] covered every base. She even went as practical as how people should vote in November, you know?”

Co-host John Berman: “The necklace! The necklace literally said, “VOTE.” There was no subtlety to it.”

Camerota: “Which people are now clamoring for this morning, of course.”

9. Take Us to Church Michelle!

“That is a preacher. That is how pastors the Sunday before the election are going to sound. She preached a word tonight, and I’m pretty sure everyone was as silent listening to that in their living rooms and sitting up straight when she began speaking.”

“There’s nobody like her [Michelle Obama] in the world. She’s got this sort of centered wisdom that I feel like she moves people in a way that other people don’t and so, for her to say, ‘Listen, I hate politics but I’ve also seen the presidency up close and if you think it can’t get worse, I’m here to tell you it can.’ That like, sent a chill through me!”

7. Amend the Constitution to Bring Back Obama

“Democrats are looking at that Obama speech tonight and saying maybe one day he could come back? Maybe the 22nd Amendment [that limits Presidents to two terms] could be repealed? Because that was a rebuke a historic rebuke of a current President by a former President….That speech by a former President in a constitutional setting, Republicans are sitting up straight and paying attention.”

CNN chief political analyst Gloria Borger: “I have to say that watching Barack Obama, this was not a convention speech, this was sort of the new definition of the ‘fierce urgency of now.’ And I could see him in the Oval Office. It was intimate and it was chilling and he was declaring a national emergency. And what he was doing was saying, ‘I need you to save democracy. Nothing less.’….This was on a higher plane. This was the emergency.”

5. Democrats Only Ones Standing In Way of GOP’s “Assault on Pillars” of “Democracy”

“Democrats are staging their convention against a candidate who better resembles an autocrat, an incumbent who has made clear he’ll try to win by any means necessary. Donald Trump and his Republican enablers are leading an unprecedented assault on the pillars of our democracy. Whether rigging the U.S. Census, destroying the Postal Service or colluding with a third-party candidate, Trump is dismantling our democratic process before our very eyes.”

MSNBC host Andrea Mitchell: “I have to say having watched Joe Biden since the ’70s when he first ran for the Senate, I’ve never seen him deliver a better speech. When he talks, as you say, so optimistically, saying ‘are we the generation that can wipe the stain of racism from our national character? I think we can.’ It was all hopeful, upbeat, optimistic. It sounded like a presidential address rather than an address to a Democratic convention.”…

NBC’s Meet the Press moderator Chuck Todd: “The Democrats have laid down a marker and Joe Biden closed it very well. This is a unified Democratic Party, more unified than any of us thought it would be a year ago, six months ago…This is a highly successful convention and it lays down a marker for Donald Trump next week. I don’t know if they can match it.”

Host Jake Tapper: “I’ve heard Joe Biden give, I don’t know, dozens, hundreds of speeches over the years. I have to say this was one of the best, if not the best performance I’ve ever seen.”…

Host Wolf Blitzer: “.I agree with Jake, it may have been the best speech Joe Biden ever delivered.”…

Host Anderson Cooper: “An extraordinary end to this convention unlike any convention we’ve seen before.”

“The choice is as simple as this: It is between a good man and a very bad man. It’s between a decent man and an indecent man. Between a moral man and an amoral man. Between a global statesman who is respected around the world and an international laughingstock and a clown. It’s between somebody who is fidelis to the American Constitution, to democracy, and somebody who has an illiberal and autocratic disposition and personality.”

“This was his finest hour. Joe Biden gave what I believe was the speech of his life. I thought it was well crafted, well delivered, and the key message — ‘I will be a Democratic candidate, but I will be an American President.’ He took it to Donald Trump, took the fight to Donald Trump, but this was ultimately a message of unity to the country, and I thought, again, the best speech I have ever seen Joe Biden deliver.”