Top 12: Disgraceful Donald Takes a ‘Dump’ On Debate and ‘Our Democracy’ 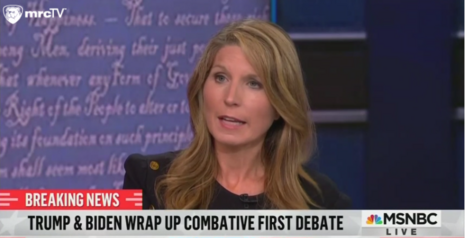 These were just some of the instant reviews by lefty anchors, hosts and reporters of Donald Trump’s performance at the first presidential debate of 2020. Network and cable journalists called the debate a “debacle” and largely blamed Trump’s “bulldozing” of Joe Biden for turning it into a “train wreck.”

Some hosts even devolved into scatalogical descriptions as they disgustingly accused the President of taking a “dump” on the “shitshow” of a debate as they claimed he took a “pee on democracy.”

The following is a top 12 countdown of the most disgusting and outrageous takes by left-wing journalists of Trump’s first 2020 debate performance against Biden:

“The moderator Chris Wallace says he wants to be as invisible as possible tonight. So that means the blizzard of lies is about to begin. And as in a blizzard, it’s going to reduce visibility, people are going to get numb. And it’s going to be up to Joe Biden to shovel the you-know-what. I mean, when truth is losing, when truth is lost, Trump is winning.”

“Trump came across like a bully. There was an avalanche of untruth statements that came out.”

10. If You Are Looking for “Decorum and Decency,” Trump Won’t Give It To You

CBS This Morning co-host Gayle King: “We have the President of the United States engaging in some of the language, and it wasn’t that it was swearing or cursing. It was just — I’m looking for the decorum and decency that you expect at this particular level and it was very hard to get it tonight.”…

CBS 60 Minutes correspondent John Dickerson: “We have 200,000 dead from COVID, an economy that is cratering, and we have significant ongoing racial unrest over the injustices in the American system and when the stakes were that high, the debate couldn’t have been lower. And it was not an equal opportunity experience. The President of the United States, who has a duty and stewardship role in caring for those three things was, by far, responsible for a greater share of the jaggedness of tonight at a time when America does not need jagged….The President came, it seemed, with just a saw tooth.”

“He’s [Donald Trump] arguing that he should stay in office and the election should be negated. He treated the debate that way, with just a monstrous, just cavalcade of increasingly wild and obscene lies.”

“This really was a debacle. If you were looking for a policy discussion to pick your president, this was not your night. President Trump erupting, barreling through his rival. Joe Biden mostly trying to avoid the fray, but this thing quickly deteriorated. A debate focused on the highest office in the land reaching a new low. From the very start, the debate devolving into interruptions and insults. A combative and angry President Trump repeatedly ignoring the rules, the facts, and often the moderator.”

6. Trump’s Performance an “Insult to Our Democracy,” a “Disgrace”

Co-host George Stephanopoulos: “Trump ignored the rules with a barrage of personal insults….Repeated attacks, falsehoods, and interruptions nearly every time Biden spoke…. It was an absolute disgrace. It was a mockery of a presidential debate, an insult to our democracy. From the start, President Trump was determined to defy the rules, repeat falsehoods, attack Joe Biden, dominate the stage.”

Correspondent Mary Bruce: “This was a disaster. It is already being called the worst debate in modern history. Any substance was completely overshadowed by the President’s interrupting and the constant squabbling.”

5. Trump “Set Himself on Fire,” “A Fire-Bombing of Democracy”

Co-host Joe Scarborough: “Donald Trump set himself on fire in front of 100 million people last night during that debate. He turned off women. He turned off independents. He turned off the same suburban voters that are turned off by Mitch McConnell trying to jam through a Supreme Court Justice in the dying days of the Trump administration. So, they have to debate whether they want to go out and let Donald Trump blow up himself again.”

CNN 360 host Anderson Cooper: “I don’t think we have seen a President of the United States completely lacking in shame. I mean, just shameless and obesely immoral. I mean, there’s not a moral fiber in this man….You cannot have watched that debate….and be proud of our President.”…

CNN chief political analyst Gloria Borger: “Here you have a President playing victim when 200,000 plus people have died from COVID-19. We know this is a President full of grievance, but tonight he took the presidency and the office of the presidency to a new low.”

CNN State of the Union host Jake Tapper: “That was a hot mess, inside a dumpster fire, inside a train wreck. That was the worst debate I have ever seen. In fact, it wasn’t even a debate. It was a disgrace. And it’s primarily because of President Trump, who spent the entire time interrupting not abiding by the rules he agreed to, lying, maliciously attacking the son of the Vice President.”…

Correspondent Dana Bash: “You just took the words out of my mouth. You used some high-minded language. I’m just going to say it like it is: that was a shitshow!”…

Tapper: “The President does not think he’s going to win this election. And he wants to bring the rest of us down with him.”

“Joe Biden has to go [to the next debate] because you don’t stand up to a bully who is trying to do whatever he’s doing, lift his leg and pee on our democracy, by not showing up and standing up to the bully.”