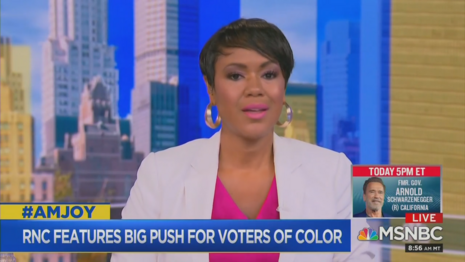 The media’s hatred for Donald Trump and conservatives was on full-tilt this past month, with lib hosts and reporters worried about the President going “postal” over mail-in ballots. They also charged him as guilty for the COVID-related deaths of Americans, including Herman Cain.

CNN ridiculously claimed that the “fiery” protests were mostly “peaceful.” On MSNBC one analyst asserted that “one in three” Americans trust Trump because they are “racist” and an MSNBC host disgustingly depicted black speakers at the RNC as a “minstrel show.”

[Click the following links to see more of the media’s biased coverage at the RNC and DNC.]

The following is a top 21 countdown of just some of the most outrageous bias by lefty journalists over the last month:

21. Out of Touch and Exasperated

“Why on Earth does this President poll well when it comes to the economy and crime? We are in a crisis!”

“The question tonight and every night for the next 83 nights is which one of these guys is going to do more harm to American democracy in his effort to interfere with our election to help Donald Trump win re-election. These two guys want exactly the same thing. They both want Donald Trump to get four more years in the White House. One is the dictator of Russia, and the other is the Postmaster General.”

“In 2016, Donald Trump relied on foreign help and voter suppression to help him squeak by Hillary Clinton. This year, he’s literally going postal to do the same thing against Joe Biden. Donald Trump is actively working to ensure that your vote, the vote that you plan to cast in the presidential ballot, may not count in November.”

18. Mika Melts Down Over the Mail

“He’s [Donald Trump] a fraidy-cat. He sees the polls. He’s losing. And so he’s going to find a different way to win, which is basically to try and undermine the election itself by undermining the Post Office, by saying the results can’t be counted. I just wonder: how ditzy and stupid does he think the American people are?…You have to try and hold on to the actual function of voting in order to retain this democracy that this President clearly seems to be breaking down day by day by day, lie after lie after lie, coronavirus death, coronavirus death after coronavirus death, which he could have prevented.”

Host Judy Woodruff: “The President is continually, almost daily now denigrating mail-in voting, is opposed to funding so much of what the Postal Service says it needs. What are we headed for this November?”…

Political analyst Mark Shields: “I think what we are talking about here is nothing less than Bull Connor in the streets of Birmingham with dogs and fire hoses. I mean, this is repression and suppression of Americans who want to vote. It is nothing less. That is what it is. And let’s call it for exactly what it is.”

16. “Cranks and Misfits” Could Easily Describe Joe and His MSNBC Panel

“Ladies and gentlemen, your 2020 Republican National Convention….A bizarre collection of alternative facts and alternative realities told by cranks and misfits that would never be allowed inside any convention before this.”

15. This Washington Post Story Brought to You By Your Friends In Communist China

“Trump views China’s Communist Party as a threat. Young Chinese see it as a ticket to a better future.”

“Many of you were probably shocked today to learn that the National Rifle Association is considered a charitable organization….I got to give it to you, NRA. You certainly do make a difference in people’s lives — the lives of people in Las Vegas, in Orlando, at Virginia Tech, Sutherland Springs, El Paso, Parkland, Santa Fe, Dayton, Virginia Beach, Thousand Oaks, Aurora, at the Tree of Life Synagogue, at Sandy Hook Elementary. The NRA didn’t pull the trigger, of course, but whenever families of victims have asked for common sense gun control laws to prevent the list I read from growing, the NRA gives no quarter.”

“Picture all of us Americans in a car together. President Trump is the driver. And he is trying to drive us off the road. He is trying to crash the car. In this analogy, the car is our democracy. It is old, it’s got a lot of miles on it but it’s still running, strong….The driver, ever since 2016….wants to go off-roading or he wants the car all to himself or he doesn’t know where he’s going. Something’s going on with the driver. He’s trying to crash the car. But all of us are along for the ride.”

12. Time to Remove the “Fundamental Threat to the Country”

“Donald Trump has revealed the ugly underbelly of American politics…There’s general consensus among at least the Democratic constituency that Donald Trump and his Republican enablers….constitute an existential threat to the country….What we’re seeing in Michigan and in Detroit, particularly in Wayne county, more broadly, is an all-out understanding that Donald Trump has to be sent home. We have to see the back of his head because he represents a fundamental threat to the country.”

11. Trump Has Turned America Into a “S” Show

“People [overseas] are looking at the way Trump has handled the coronavirus and thinking, ‘You know what? Maybe I don’t always like the Americans kind of interfering in our elections, or talking about democracy. But we’ve always thought they were competent.’ Well, now we’ve exploded the image of our own competency where people around the world look at the United States and think, ‘This is a Godamn ‘s’ show. That these people don’t even know how to run a two-car funeral.’”

10. CNN Doesn’t Seem to Understand What the Word “Peaceful” Means

9. Trump Wants to Be “Seen As a Killer” By His “Violent Voting Base”

“[Donald Trump aide] Stephen Miller always encourages Trump’s most aggressive and most violent impulses, which Trump appreciates because every time he listens to a more moderate adviser he gets pummeled and ridiculed by his base as weak, which Trump hates. He wants to be seen as a killer and Stephen Miller shares his instincts for violence. He has his fingers on the pulse of his most violent voting base who want to see these really hostile policies separating children from parents, systematically turning away the most vulnerable, most desperate people at the U.S./Mexico border.”

“Joe Biden claims that the administration has, in his words, cloaked America in darkness, in anger, in fear, in division…Does the Vice President have a point?”

7. Just Say It Mr. Congressman, the President Has “Hate In His Heart” for Black People

“Do you believe that what this President is doing is on par with what [Rep. John] Lewis and you and so many a generation fought against in the ’60s?….You think this President has hate in his heart for people like you and for the idea of justice and society for all?”

6. Sir, When Did You Stop Beating Your Wife?

“Mr. President, after three and a half years, do you regret at all, all the lying you’ve done to the American people?”

5. One-In-Three Americans Trust Trump, Because They Are Racist

4. Looking Forward to Watching Police Drag Donald Out of the White House

“There’s going to be a split screen on January 20, 2021. If Joe Biden is now going to be the 46th president of the United States, you will have him being inaugurated and — and watching police and armed forces trying to pull Donald Trump out of the White House. I cannot wait for that split screen.”

“Herman Cain went to that Tulsa rally, okay, the Tulsa rally that the medical experts in Tulsa did not want the President to hold because they knew it would be dangerous. He went as a healthy, 74-year-old man. He was not sick. He was not positive for coronavirus that day. Then a month later, he is dead. Is there any feeling inside the White House of responsibility, of guilt, of connection to this?”

2. Voting for Trump Is Suicidal

“You say you’re haunted by your vote for President Trump in 2016 because you fear that now with the pandemic, you may have signed your own death warrant.”

“I watched the Republican convention, and seeing the slew of black speakers that they had, it really did look like a modern-day minstrel show to me.”