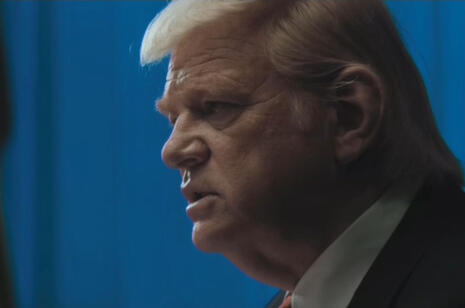 In “Night One,” Showtime’s The Comey Rule was a distorted liberal fantasy of lies and made up scenes and the “Night Two” conclusion on Monday wasn’t much different.

The Comey Rule is based on disgraced former FBI Director James Comey’s own memoir so it’s no surprise that he’s the tragic martyr in this and everyone on his side is shown to be patriotic, non-partisan heroes, while everyone in the Trump administration is portrayed as bumbling sycophantic fools, but it doesn’t make it any less nauseating. In the second episode, the biggest target was General Michael Flynn.

William Sadler plays Flynn as a buffoon, desperate to stay in Russia’s good graces. Here is how one of the incoming National Security Advisor’s infamous December 2016 calls with Russian Ambassador Sergey Kislyak was imagined:

Kislyak: Did you see this?

Kislyak: I doubt that. Sanctions strangle my country, -not yours.

Kislyak: Expelling 35 diplomats, closing two of our properties, financial hardship. Mr. Putin, my president, views these as unwarranted attacks on his people, and a personal insult.

Flynn: I understand. But, please, tell him not to react. All right? The President-Elect and I do not support the Obama sanctions. Just let us get in there. We’ll fix this.

Of course, we actually learned in May of this year from the call transcripts that all Flynn did was ask that Russia not “escalate” in response to the sanctions, he did not say that they did not support them or would “fix” them. In fact, according to the transcript, Flynn said, “I know you have to have some sort of action …only make it reciprocal…Don’t go any further than you have to. Because I don’t want us to get into something that has to escalate, on a, you know, on a tit for tat.”

But look at how it’s twisted in this scene of the FBI interviewing Flynn on January 24, 2017, about the calls.

Strzok: Did you discuss any matters of substance with the ambassador?

Flynn: Uh, well, not many. Not many. I was in the Dominican Republic at the time, and the, uh, cell reception was not great.

Strzok: Did you ask him at all about the upcoming UN vote on the Israeli settlements?

Flynn: Uh, listen, Sergey, while I’ve got you, um, the upcoming UN vote on the Israeli settlements… Just in a very general way. You know, “What’s your– what’s your position on this?” You know, that kind of thing. I’m… I’m sure you know all this already. You-you were probably listening in, right?

Strzok: Did you ask him to have Russia abstain from the UN vote?

Flynn: No. I did not. Any chance that I can talk you into abstaining or…

Strzok: Did you ask for help in delaying the vote?

Flynn:…Maybe delaying the vote for a few days? No.

Strzok: Did you discuss with him any of the new sanctions that the Obama administration had levied upon Russia as punishment for Russia’s interference in our election?

Flynn: No. Uh… In fact, I didn’t even know about those at the time. Um, I didn’t have access to, uh, television news in the Dominican, and my-my government-issued blackberry wasn’t working.

Strzok: Were you concerned at all about the Russian government, that they might retaliate for the sanctions, perhaps escalate tensions between the two countries?

Strzok: Did you ask of the ambassador that Russia not retaliate in any way to these measures?

Strzok: Did you say anything along the lines of…

Flynn: Just let us get in there.

Strzok:…”Let us get in there -and fix this”?

Flynn: So there’s no need for him to engage in any sort of reciprocal… -Um… …Tit-for-tat response. Not really. You know– you know what, I don’t remember. Um, you know, if the subject came up at all, it-it certainly wasn’t, you know, “Hey, don’t do anything.”

Comey subsequently admitted that sending the two FBI agents to interview Flynn without coordinating with the Trump administration was not standard practice and “something I probably wouldn’t have done or maybe gotten away with in a more … organized administration.” That’s not addressed in The Comey Rule.

Also not mentioned, a DOJ draft memo from January 30, 2017, stated, “FBI advised that based on this interview, they did not believe General Flynn was acting as an agent of Russia…FBI also advised that although they recognized the statements were inconsistent with the FISA collection, they believed that Flynn believed what he was telling them. FBI did not confront Flynn with the communications during the interview.”

We are still learning so much about the railroading of Flynn, it would be impossible for the show to be accurate even if it wanted to. This year, hand-written notes by FBI Agent Bill Priestap were released proving that investigators were working to entrap Flynn in the 2017 interview. Priestap wondered, “What is our goal? Truth/Admission or to get him to lie, so we can prosecute him or get him fired?” But, obviously, all actions by the FBI were portrayed as honest and above board in the mini-series.

President Trump (Brendan Gleeson) finally made his grand entrance in “Night Two.” Gleeson’s portrayal was obviously meant to disgust, from the way he puts his arm on the shoulder of a pageant contestant to how he eats his ice cream. The music and cinematography is clearly intended to make Trump seem menacing, but I don’t think he comes off quite as bad as they intend.

The Steele dossier is brought up again, with the intelligence chiefs assuring President Obama it “comes from a credible source” and “Nothing in the dossier has been disproven to date.” We only found out last week that the major source for the dossier was Igor Danchenko, a suspected Russian spy, who was known as Steele’s primary sub-source in December 2016 and interviewed by the FBI in January 2017 when he told them that Steele had exaggerated some of his claims and that his own sources were second-hand.

Throughout the series, acting Attorney General Sally Yates (Holly Hunter) is portrayed as a noble apolitical actor championing a defense of the DOJ as a “politically agnostic institution.” Of course, in actuality, she was an Obama appointee and hero to the #resistance. When she is fired in The Comey Rule, no explanation is given so the assumption of viewers who don’t remember or know the details might be that it was another instance of Trump obstructing justice over the Russia investigation when, in fact, she was fired over her refusal to enforce Trump’s travel ban.

Jeff Daniels’ Comey is a respected, admired man of principle who always puts the law over politics. He is shown as beloved by his staff and the rest of the FBI as they all cry after his firing. The Comey Rule shows Comey furiously taking notes about each of his meetings and calls with President Trump, as well as distributing them to his staff for discussion. Conveniently, the series ends just a few days after Comey’s firing so they never get to the part where he illegally leaks his memos to the press and gets chastised by the Justice Department’s inspector general.

The fact that it ends in early 2017 also means that they can ignore the Mueller Report and all the findings we are still learning about to this day about how the FBI completely botched their investigations and all the illegal and unethical actions they took in conjunction with the Obama administration in their quest to bury Trump.

The Comey Rule is a twisted liberal fantasy about what they think happened around the 2016 election. Now someone should make a movie about the truth.