Twitter seems to allow the Chinese government to spread propaganda, and now the communist nation can apparently make brazen threats against political enemies at its leisure too.

Global Times, which has been labeled by Twitter as “China state-affiliated media,” has been accused of issuing a direct threat against a Taiwanese politician via Twitter. India Today Foreign Affairs Editor Geeta Mohan called out the Global Times for issuing a “death threat to the President of Taiwan!”

Global Times had posted a tweet with some violent rhetoric:

“Voice:Taiwan leader Tsai Ing-wen, who pledged deeper ties with the US at a dinner for a visiting senior State Department official,is clearly playing with fire. If any act of her provacation violates the Anti-Secession Law of China, a war will be set off and Tsai will be wiped out.” 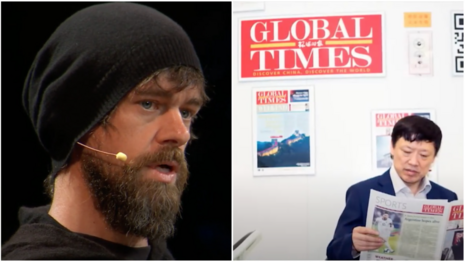 The same outlet has featured a history of violent political rhetoric. On September 18 it shared an editorial post declaring that China “is determined to take all necessary means, including military options, to prevent the US and the island of Taiwan from upgrading their provocations” along with an image declaring “a war will inevitably break out.”

The previous day the outlet shared rhetoric threatening: “If the US wants to support #Taiwan to become a UN member” then “China shall use non-peaceful and other necessary means to solve the Taiwan question once and for all.”

Twitter has a history of indulging China’s worst foreign policy tendencies, including allowing blatant Chinese propaganda to be spread about and among Americans. Two examples of this would be when Twitter allowed a Chinese official to scapegoat the U.S. military for spreading the virus and when the platform allowed a lego-based propaganda video published by a Chinese embassy erroneously accusing the American government of not handling the virus response properly.

Conservative leader Rep. Jim Jordan (R-OH) raked Big Tech over the coals for supporting Chinese misinformation at a late-July hearing. At this hearing he juxtaposed how the WHO “can say whatever they want. They can lie for China, they can shill for China,” but “if you say something against them, you get censored.”

Twitter allows dictators from China and Iran to use the platform, meanwhile citizens of those countries may not. That’s a hypocrisy Republican leaders called out in March. Senator Ben Sasse (R-NE) and Congressman Mike Gallagher (R-WI) signed an open letter demanding Twitter ban Chinese propaganda accounts and all foreign leaders who use Twitter while not allowing their citizens to do so.

Even liberal news outlets have called out Twitter for allowing Chinese misinformation to run rampant on its platform. “An army of bot accounts linked to an alleged Chinese government-backed propaganda campaign is spreading disinformation on social media about coronavirus and other topics, including an exiled businessman, according to a London-based researcher,” Bloomberg News reported on May 12.

Conservatives are under attack. Contact Twitter’s leadership by tweeting at the official @Twitter account demand that Big Tech companies stop allowing Chinese government sponsored propaganda on their platforms. If you have been censored, contact us at the Media Research Center contact form to be included in our database, and help us hold Big Tech accountable.