Big Tech is famous for censoring conservative speech, even as it allows leftist organizations to post the purported private address of a conservative senator in order to organize protests and intimidate.

“Protesters on Monday gathered outside South Carolina Senator Lindsey Graham’s house to ‘wake him up’ over his push to quickly replace Supreme Court Justice Ruth Bader Ginsburg, who passed away Friday,” Newsweek summarized on September 21. Indeed, ShutDownDC, which described itself on Twitter as “an organizing space where individuals and groups can come together to organize direct action in the fight for justice,” tweeted out Graham’s purported address to its 9,000+ followers on September 20. 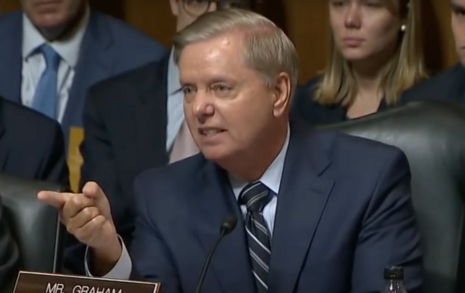 ShutDownDC told followers: “Get some rest tonight so you’re ready to join us tomorrow morning at 6:00! … See you at [] bright and early to make some noise and wake Lindsey Graham up!” The post featured a banner explaining that “Shut Down DC and Sunrise DC will be WIDE AWAKE to protect RBG’s seat on the Supreme Court.”

Sunrise Movement DC posted footage of the protest and wrote: “We’re here with your wake up call @LindseyGrahamSC RBG’s seat will be filled after the election.”

Facebook also allowed both Shut Down DC and Sunrise DC to organize the protest via a Facebook event page, which specifically listed Graham’s address and called upon supporters to “join us at Graham’s house” and “make some noise!”

“Wakey wakey Senator!! We’re outside Senator Lindsey Graham’s house this morning taking his advice… we’re using his words against him. ‘If there’s a Republican president in 2016 and a vacancy occurs in the last year of the first term, you can say Lindsey Graham said, “Let’s let the next president, whoever it might be, make that nomination.”’ Well here we are, doing just that. #RBG #DefendDemocracy #HONORHERWISH Wide Awake: Lindsey Graham.”

Newsweek reported that this civil unrest came to pass: “In several videos posted to Twitter, protesters can be seen filling the streets outside of Graham’s home, yelling ‘wake him up’ while banging pots and pans.”

Facebook founder and CEO Mark Zuckerberg explained his concerns about upcoming civil unrest in an early September interview with Axios. He stated, “I think we need to be doing everything that we can to reduce the chances of violence or civil unrest in the wake of this election.” Zuckerberg then went on to profess: “We’re trying to make sure that we do our part to make sure that none of this is organized on Facebook.” However even after being contacted about violent groups such as Rose City Antifa and foreign interference such as Canadian leftist organization Adbusters, Facebook has proven that it does not follow through on its founder’s commitment to quell political unrest.

Conservatives are under attack. Contact Twitter’s and Facebook’s leadership by tweeting at the official @Twitter account  and contact Facebook headquarters at 1-650-308- 7300 or 1-650-543-4800 and demand that Big Tech companies not permit doxxing on their platforms. If you have been censored, contact us at the Media Research Center contact form to be included in our database, and help us hold Big Tech accountable.