Twitter Moments is as biased in curating the campaign as the “independent fact checkers.” It would figure that the Democratic convention would cause them all to fact check…..the Republicans, not the Democrats. Promoted at the top of the Moments this morning was this gem:

The DNC did not remove the phrase ‘under God’ from the Pledge of Allegiance, Snopes and PolitiFact confirm

The bias multiplies in favor of those allegedly faith-based Democrats. As usual, the fact check was on President Trump, who tweeted: 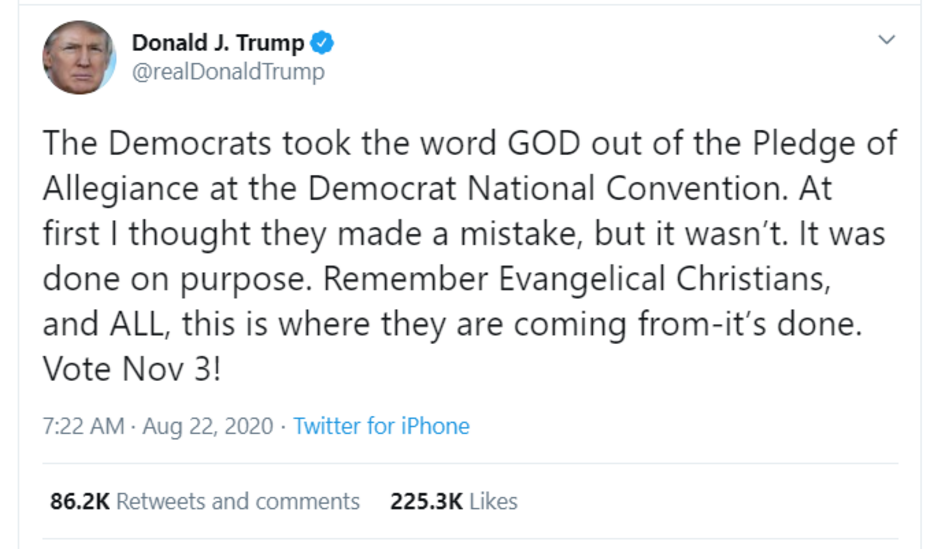 The Democrats took the word GOD out of the Pledge of Allegiance at the Democrat National Convention. At first I thought they made a mistake, but it wasn’t. It was done on purpose. Remember Evangelical Christians, and ALL, this is where they are coming from-it’s done. Vote Nov 3!

Except, as Team Trump demonstated, they did, on several occasions! This one is really something, as Tim Murtaugh showed:

It’s amusing to see the “fact checkers” running around insisting that it’s false that the DNC omitted “under God” from the Pledge of Allegiance.

This is Joe Biden’s party. pic.twitter.com/jvOloBMevX

So all the “fact checkers” strongly interpreted Trump to be saying the Democrats somehow BANNED the use of “under God,” which is not what he said.

Twitter Moments reported “While the phrase was omitted from at least two recitations of the Pledge of Allegiance at individual caucus meetings during the DNC, the phrase was included during every recitation of the pledge before each night’s events.” 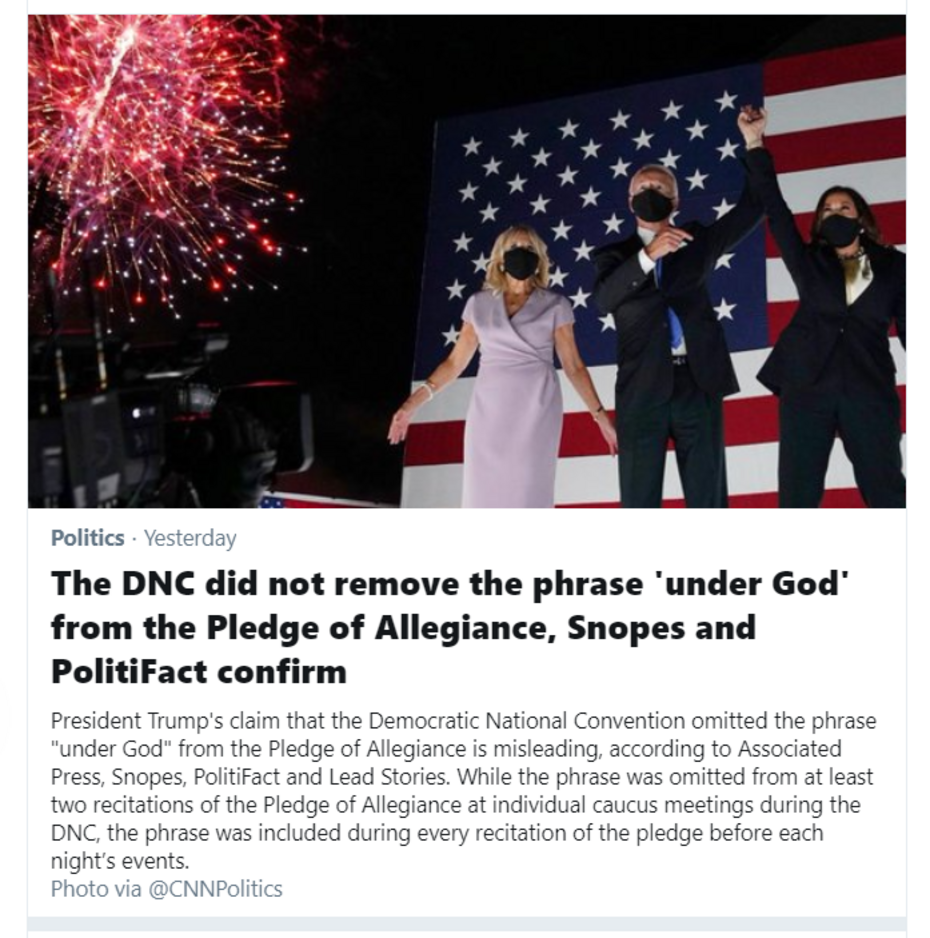 “The DNC did not issue any guidelines forbidding the use of the phrase. On the national stage, the phrase “under God” was used during the recitation of the Pledge of Allegiance at the start of each night of the 2020 DNC.” — Snopes

“Some caucuses omitted ‘under God’ from the Pledge of Allegiance during Democratic National Convention meetings. But the line was not excluded from any of the convention’s primetime spots.” — PolitiFact

“Conservative news outlets like the Washington Examiner have pointed out that, during the livestreamed Muslim Delegates Assembly on Aug. 18, one participant omitted ‘under God’ from the Pledge. A delegate at an Aug. 18 LGBTQ Caucus meeting also abstained from saying it.” — PolitiFact

If certain livestreamed RNC assemblies are singled out by the Democrats as committing some political or religious offense, these same sites are very likely to avoid this kind of energetic “but the overall Republican Party never condoned this.”

Twitter and its friendly liberal fact-checkers aren’t warning people about the latest misleading tweets of Joe Biden, like this one: “Donald Trump continues to cozy up to Russia while Putin persecutes civil society and journalists.” 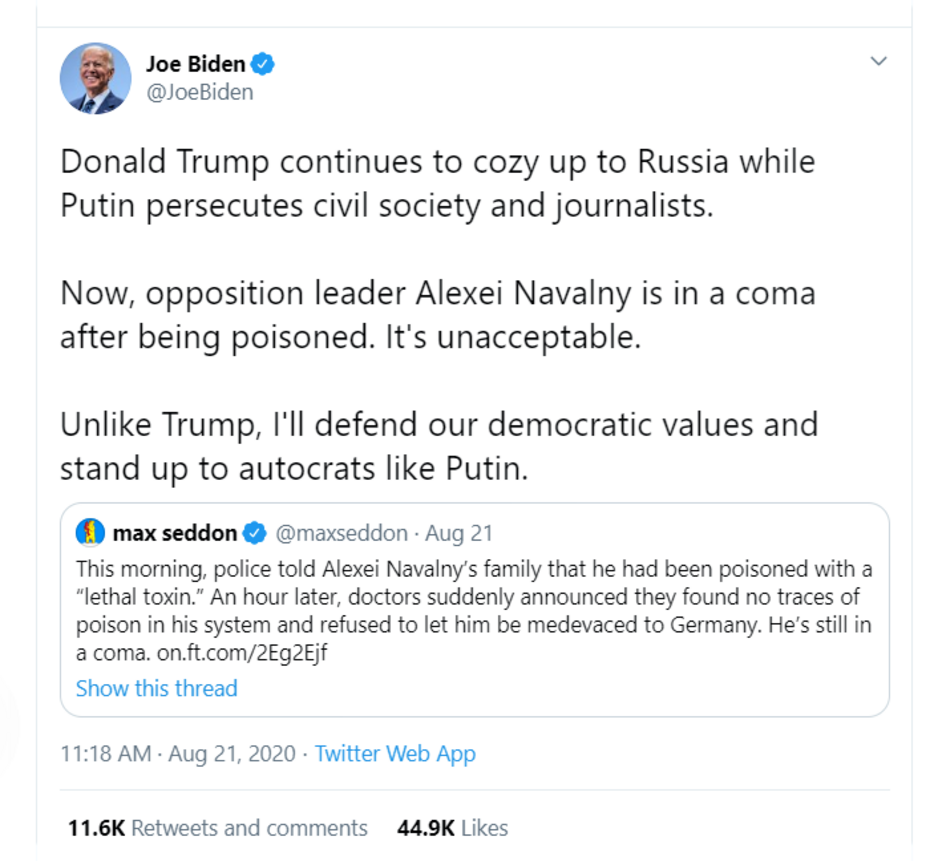 This ignores that Trump has been quite tough on Russia, in fact far tougher than Obama and Biden. If we compared Biden’s record on Russia and the USSR over his long tenure in the federal government to Trump’s last four years, how would he look?

Then there’s this whopper, like the Soviet-pleasing Democrats were friends of the Baltic nations…chained into the Soviet Union for most of the 20th century. 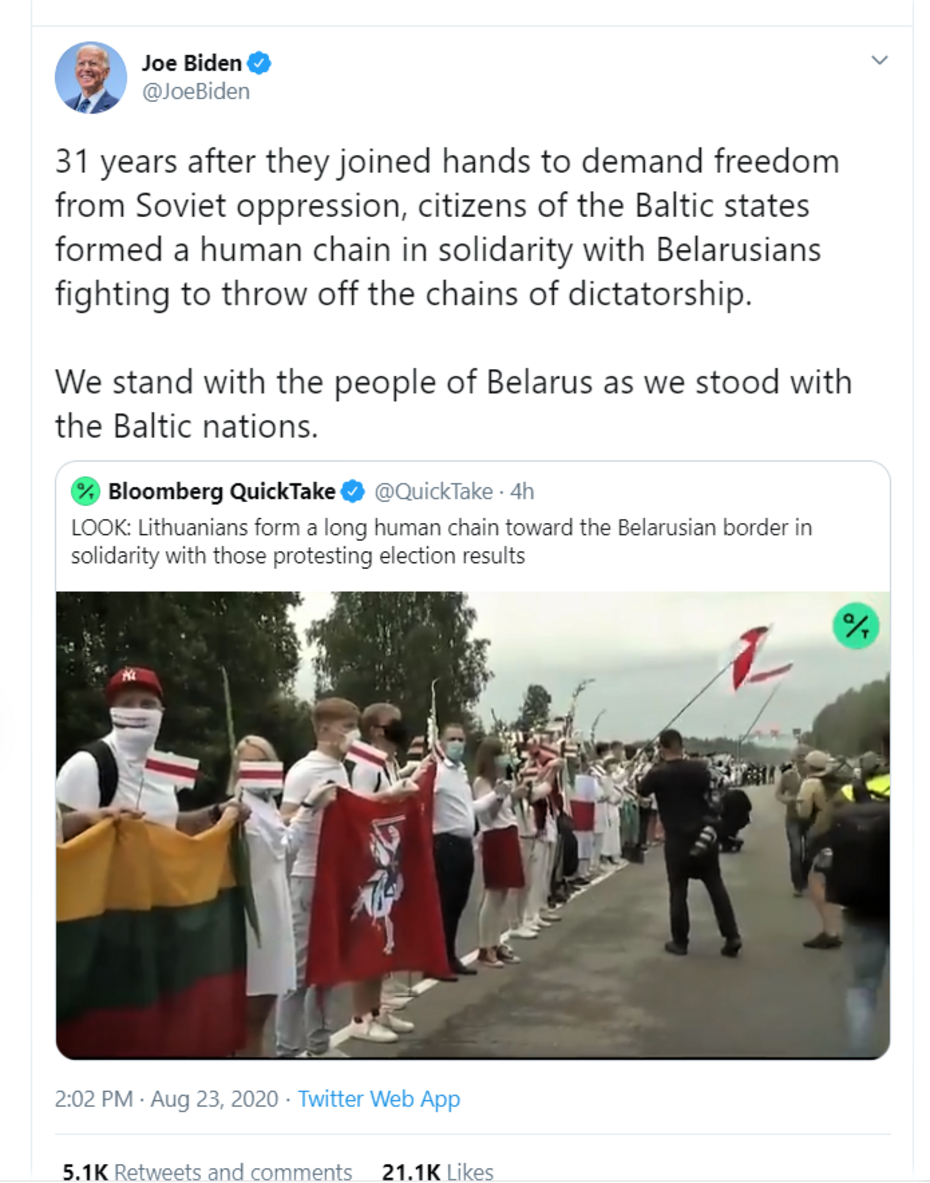 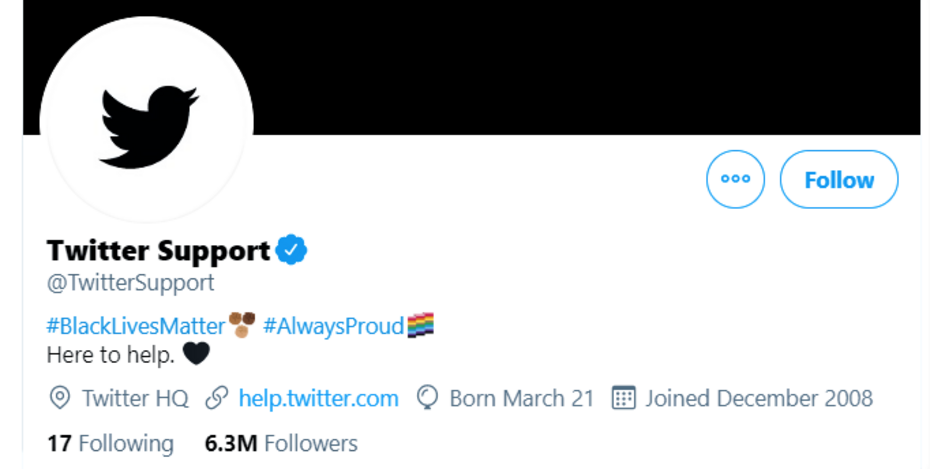