“Some advice for you all – over the past few weeks I reported 100s of tweets from the hashtags #IStandWithJKRowling #IStandWithMaya – twitter took it seriously. Report the hate. Report the false info. Report the trolls for harassment. Get the accounts suspended. #RIPJKRowling”

Additionally, other users have reported that Twitter has taken subtle action to diminish the hashtag’s popularity through their autofill feature. “The fact that when you type that hashtag it auto fills with #IStandWithJKRolling instead of #IStandWithJKRowling is illuminating,” tweeted one user. The move acts to dilute the numbers and stop the hashtag from trending.

Twitter claimed that it does not pick sides when analyzing content, the company’s blanket defense of transgender rights says otherwise. In 2018, Twitter broadened its “hateful conduct” policy to shield LGBTQ individuals on its platform from the “misgendering or deadnaming of transgender individuals,” and has permenantly banned users who question the left’s narrative about sex and gender. While the platform goes after climate change critics on the basis of science, science is not allowed to be the underpinning of an argument about sex and gender.

PinkNews, a left-wing outlet that dominates the LGBTQ outrage market, attacked Rowling’s book that was released Sept. 15 about a male serial killer who dressed as a woman while on violent killing sprees. 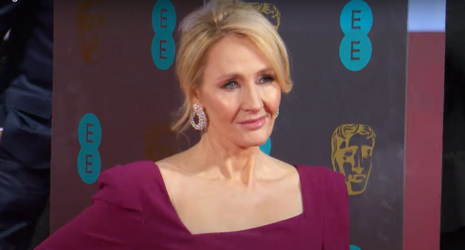 Rowling has been under intense scrutiny from the progressive-bloc of LGBTQ individuals for her recent viewpoints on the biology of sex, deemed controversial. Yet, she has refused to back down, continuing to articulate her viewpoints on Twitter and on her personal website. In one case, Rowling supported Maya Forstater, a British researcher who lost her job for questioning whether biological males have the capacity to become biologically female, with the hashtag “#IStandWithMaya,” according to the Guardian.

“If sex isn’t real, there’s no same-sex attraction. If sex isn’t real, the lived reality of women globally is erased,” Rowling tweeted. She added that she knew and loved many transgender people, “but erasing the concept of sex removes the ability of many to meaningfully discuss their lives. It isn’t hate to speak the truth.”